The impact of coronavirus on Yemen will be devastating after years of civil war, the head of the United Nations Refugee Agency in the country has told Sky News.

Speaking from the Yemeni capital, Sana’a, Jean-Nicolas Beuze said the number of suspected COVID-19 cases in the country appears to be multiplying fast and, at the same time, international aid agencies are being forced to abandon critical programmes.

“The coronavirus may be the straw which will break the camel’s back in Yemen,” Mr Beuze said via video link.

“It’s very difficult for the public health authorities despite all their efforts to track the spread of the coronavirus. We don’t have enough tests.

“Half of the health facilities have been destroyed by five years of conflict. People die from many other causes too such as dengue fever, malaria, cholera.”

The UN warning comes as Sky News has filmed footage in the southern city of Aden showing line upon line of graves as authorities cope with the growing number of dead.

Numerous diseases are already endemic in Yemen and years of civil war has displaced millions.

More than 24 million Yemenis – 80% of the population – are in need of humanitarian assistance. Half of the country’s health facilities are dysfunctional and nearly a quarter of the country’s districts have no doctors.

“We know that the immunity among the population is very low. We are speaking here about people who maybe eat once a day. We are speaking about children who have not been vaccinated,” Mr Bouze said.

“We are speaking about people who have fled their homes because their homes were shelled or bombed and therefore do not have any livelihood.”

Critically though, he said that just at the time when urgent extra aid is needed, squeezed donor countries are cutting their funding. 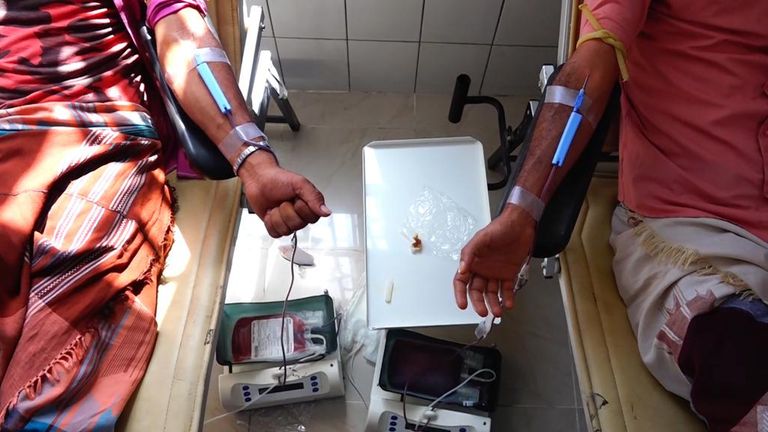 “All the humanitarian partners here… are missing critical funding. The UNHCR will be closing, in a few days, a number of lifeline programmes. So we will be leaving 3.6 million internally displaced and 280,000 refugees without any form of assistance. It’s a life and death situation for them.”

Global coronavirus restrictions prevent us from travelling to Yemen to see the situation first-hand. But relying on a network of local cameramen and testimony from both local and international aid agencies, Sky News has built up a picture of the situation. 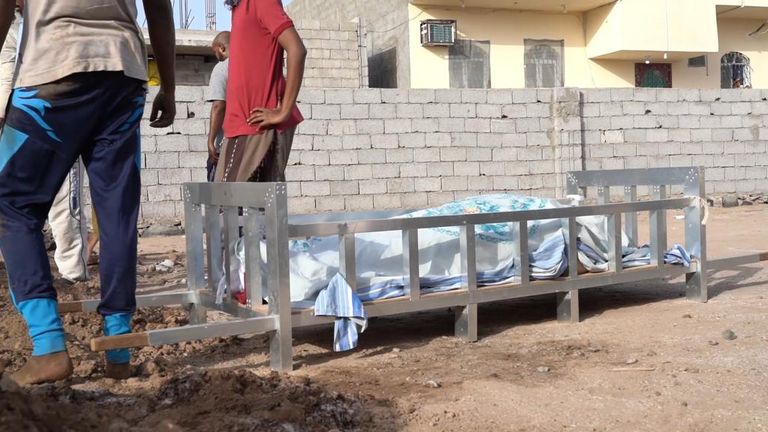 In the southern city of Aden, the crisis is clear at the Radhwan cemetery. Our cameraman filmed as graves were dug and bodies lowered into them.

In the past week alone, in this one city, about 500 people have died with corona-like symptoms according to the city registrar. It is a figure which represents a significant spike. 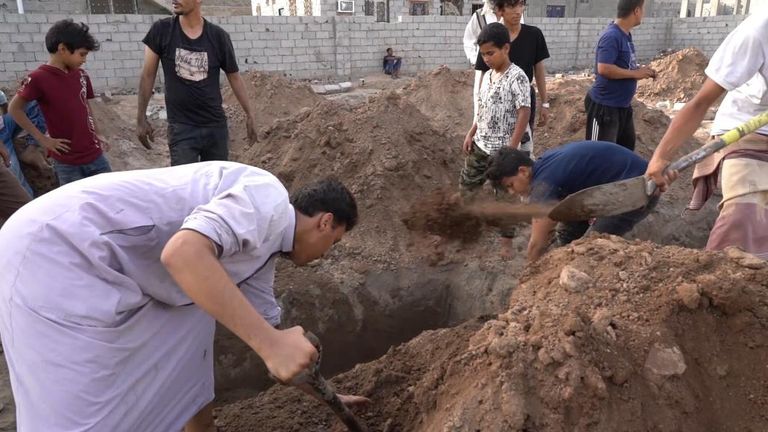 The numbers and causes of death cannot be accurate in this chaotic place, but it is clear that in a little over two weeks Yemen has gone from no cases to many hundreds.

“Nobody knows what the disease is exactly,” Fadhl Qaed Ahmed, who manages the cemetery, told us. 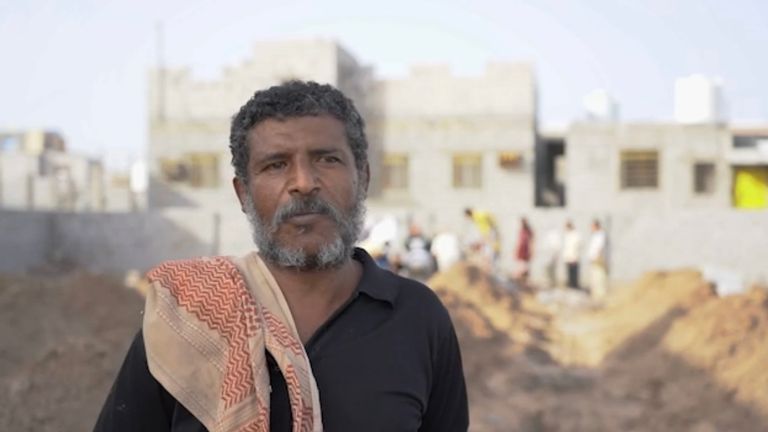 “They sometimes say it’s the plague, other times chikungunya or malaria. We don’t know what the reality is and there are no specialists to confirm what disease exists,” he said.

In anticipation of the days ahead, empty holes line the cemetery with cleared land beyond. 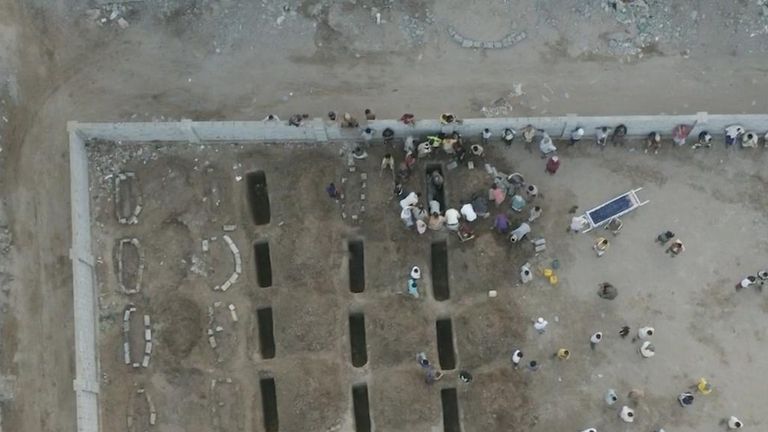 “Here we see a funeral coming our way. This is the fifth funeral this afternoon, while we’ve buried seven bodies this morning,” he added.

There is a hopelessness about it all too. Of the scores of people helping to deliver the bodies to the graveyard and to bury them, not one is wearing any protective clothing or a mask. Aden is the interim seat of the Saudi-backed government in Yemen. It was removed from the country’s capital Sana’a in 2014 by the Iranian-backed Houthi rebel group who now control the north.

This past week, the government’s coronavirus committee declared Aden an “infested city” because of the prevalence of the virus on top of existing diseases. 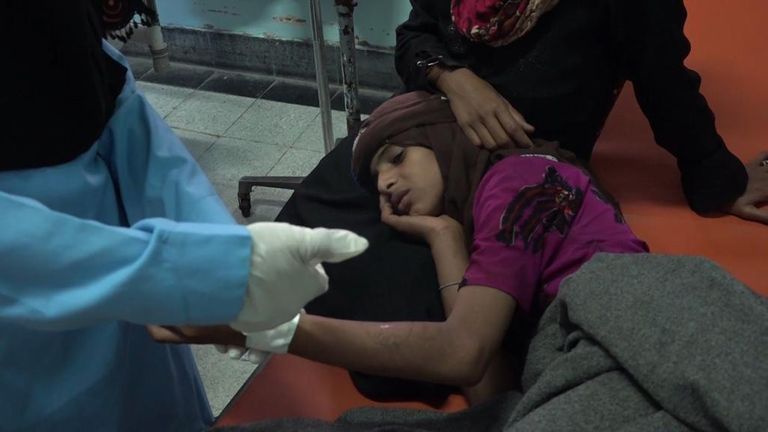 The roads out of Aden tell the story of this country. Each of the destroyed houses represents a family either dead or displaced. The United Nations (UN) estimates that the conflict has killed more than 100,000 people.

Millions of survivors are living in camps where the UN refugee agency has warned they will soon lose their aid and support. 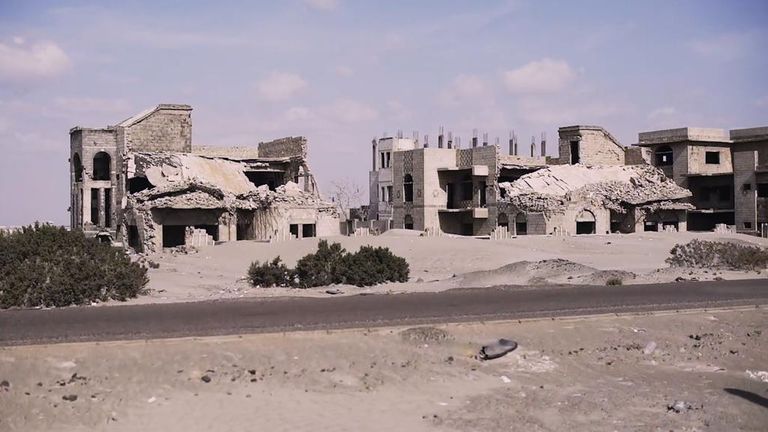 The presence of coronavirus in Yemen and the impact the virus is having on the economies of wealthy donor countries is a devastating dual blow.

Around 120 miles north-west of Aden is Taiz.

Yemen’s third largest city, once its capital of culture, it is now a front line in this long war. The city is divided between the warring factions.

An unofficial ceasefire in April, called because of coronavirus, is holding for now. But the city is battered after years of being the dividing point in this conflict.

They test for cholera, dengue fever, chikungunya and malaria. It is the rainy season now, and with that, in a country like this, all these diseases thrive. 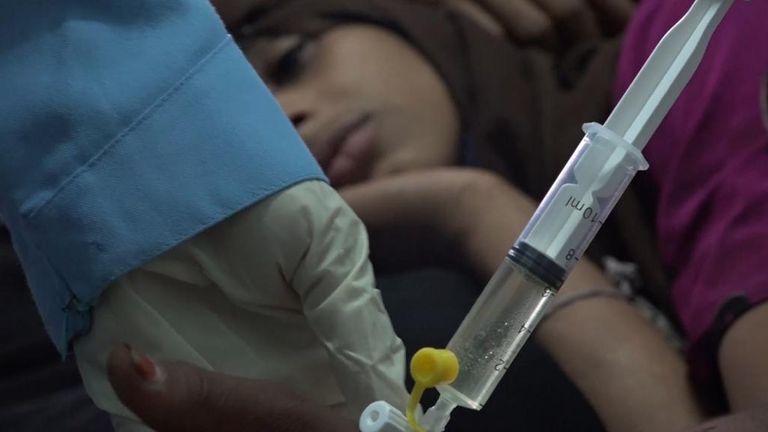 Further north, Sana’a, in the northern mountains, is the heartland of the Houthi rebels.

As part of our effort to gather material and insight from across the country, a month ago we spoke to Dr Hamdan Bajary, the head of the Intensive Care Unit (ICU) at Sana’a’s Al-Thawrah General Medical Hospital.

It was a few weeks before there had been any confirmed cases of COVID-19. Yet he warned of the dangers ahead. 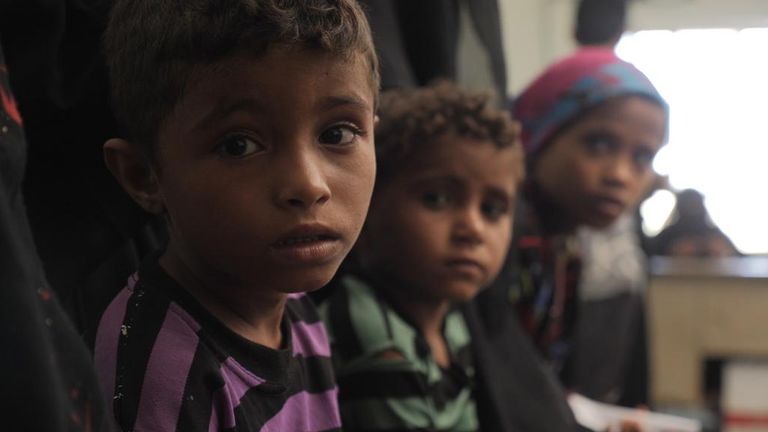 “All ICUs are overcrowded with patients and we haven’t sufficient mechanical ventilation. Even Italian people can’t face this struggle. It’s a big disaster,” Dr Bajary said. 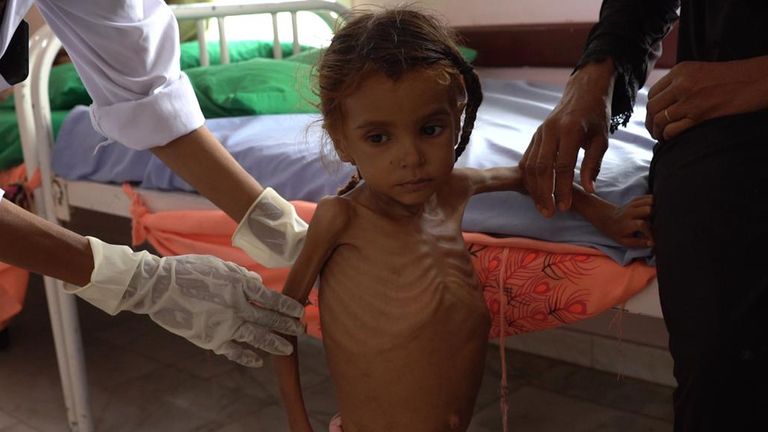 Since we filmed that interview, it is no longer possible to access the hospital. The authorities in control in the north will not allow it.

But Sky News has spoken to a number of well-placed contacts inside the country who say the Houthi authorities are failing to disclose the true number of cases. 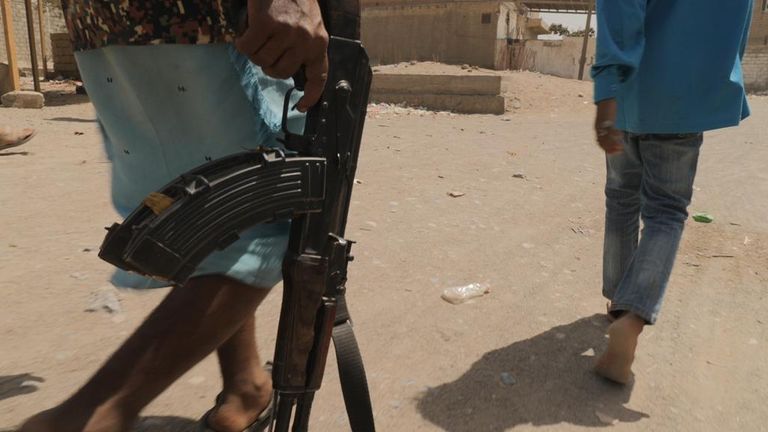 Intensive care units are overwhelmed and the mortality rate in ICUs, we are told, is near 100%.

Many people are not even making it to the hospitals with reports of many dying at home and some collapsing as they reach help. 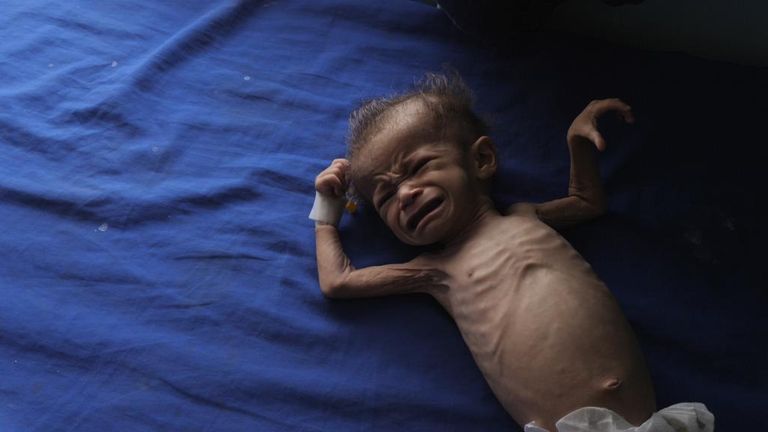 Yet even in this hopelessness, or maybe because of it, we found remarkable ingenuity.

To the west of Sana’a, the hospital in the city of Hajjah supports the whole of Hajjah governorate – an area of four thousand square miles of mountains and coastline. It is the region where poverty and malnutrition are at their most acute.

In a dusty room in the back of the hospital we discovered Luai Taha al Mahbashi, a medical engineer with a vital skill. He explained how he was recycling endless bits of medical equipment and repurposing them into lifesaving devices.

Using a blueprint from the internet and inspiration from a UK-based company, he has created his own makeshift CPAP machines – devices that have saved so many lives globally.

And at his desk, he showed us how he is creating an infrared thermal scanner.

“This sensor is going to read the temperature of the human, the patient. 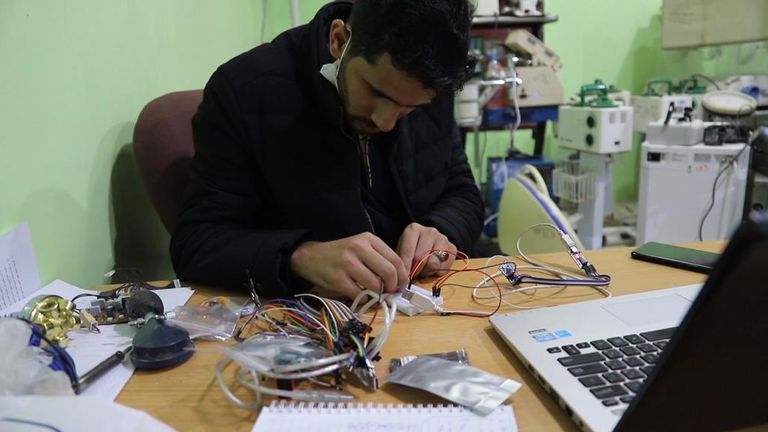 But he ended with his fears if the world doesn’t help.

“It’s going to be a really big disaster for my country. Yemen is going to be deleted from maps all over the world. The situation is really dangerous.”