The Bulletin of the Atomic Scientists have kept the Doomsday Clock at 100 seconds to midnight for the third year in a row.

The clock, which metaphorically counts the time until the end of the world, remains at the closest point it has ever been to midnight – and one of the group’s leaders warned that “steady is not good news.” 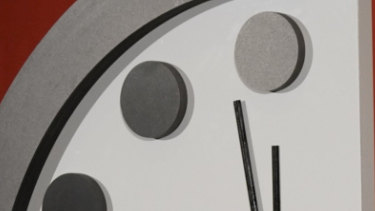 Is humanity safer or at greater risk this year compared to last year? The Doomsday Clock says nothing has changed.Credit:The Bulletin of the Atomic Scientists

The unchanged time “reflects the judgment of the board that we are stuck in a perilous moment that brings neither stability nor security,” said Sharon Squassoni, a professor at George Washington University and co-chair of the bulletin’s science and security board.

The announcement, made Thursday (local time) at a virtual news conference, marked the 75th anniversary of the symbolic timepiece. Since it was created, the clock has wavered between 100 seconds and 17 minutes to midnight.

The bulletin’s science and security board sets the Doomsday Clock each year to answer two important questions,” Rachel Bronson, the group’s president, said during the announcement.

The decision, she added, is an assessment of “the threat to human existence, with a focus on man-made threats: nuclear, climate change and new disruptive technologies.”

The Doomsday Clock moved to 100 seconds in 2020 – the first time the clock had passed the two-minute mark since its inception.

Author Hank Green, a featured guest at the announcement, pointed to the unchanged clock and said initial impressions were misleading.

“At first glance, that might seem like ‘Great, OK, we’re at the same place as last year,’ but we aren’t,” he said. “If you have looked around, it feels like things have changed this year.”

Last year, in announcing that the clock would remain where it was, the group acknowledged the ongoing coronavirus pandemic, referring to it as a “historic wake-up call.”

The bulletin’s 2021 announcement noted that it did not see the pandemic as an existential threat that will “obliterate civilisation”.

However, it said the pandemic served as a “vivid illustration that national governments and international organisations are unprepared to manage nuclear weapons and climate change, which currently pose existential threats to humanity.”

It said governments were equally unprepared for other dangers – including more virulent pandemics and next-generation warfare – that could threaten civilisation in the future.

In determining the clock’s timing, the bulletin traditionally focused on the availability of nuclear weapons and the potential for world powers to use them. In recent years, it has expressed growing concern about the effects of climate change, as well as the spread of disinformation.

The Bulletin of the Atomic Scientists was founded by scientists who had worked on the Manhattan Project and were concerned about the consequences of that nuclear research.

Bronson the bulletin’s leaders “believe that because humans created these threats, we can reduce them. But doing this is not easy – it requires serious work and global engagement at all levels of society.”

The group pointed to some positive developments, but that these did not outweigh longer-term negative trends.

The group, for example, pointed to the extension of a nuclear accord with Russia that prolongs limits on the arsenals of both nations. Bronson referred to it as a “small down payment on strategic stability so desperately needed between the US and Russia.”

Speaking about climate change, Raymond Pierrehumbert, a physics professor at the University of Oxford, said the beginning of the Biden administration marked the “return of an administration that views global warming as a real and serious problem requiring action.”

Pierrehumbert said there was also hope that the COP26 summit in Glasgow late last year would “usher in a new era of more stringent commitments toward achieving” a goal of zeroing out carbon-dioxide emissions.

“Unfortunately, the clock is ticking, and actions taken are not nearly sufficient to achieve decarbonisation of the world economy at a rate needed to avoid 2 degrees of Celsius of warming,” he said.

Pierrehumbert pointed to an “onslaught of climate disasters” in the past year, including floods, fires and droughts.

“But this is just a sample of what is to come” if carbon emissions are not lowered, he said.