The police and protesters in Australia clashed at a rally calling for an easing of restrictions. And politics delayed efforts by U.S.A.I.D. to help communities around in the world.

A college student in Britain was fined £10,000 after organizing a party for more than 50 people in violation of pandemic restrictions.

Here’s what you need to know: 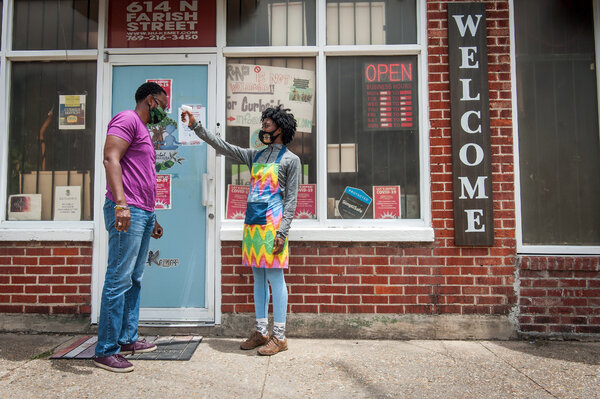 Since the beginning of the pandemic, the practice of checking for fever in public spaces has become increasingly common, causing a surge in sales of infrared contact-free thermometers and body temperature scanners even as scientific evidence indicating that they are of little value has solidified.

Gatekeepers with thermometer guns have appeared at the entrances of U.S. hospitals, office buildings and manufacturing plants to screen out people with fevers who may carry the virus. And Gov. Andrew M. Cuomo of New York last week called for checking patrons’ temperatures as one of several ground rules for resuming indoor dining in restaurants.

But while health officials have endorsed masks and social distancing as effective measures for curbing the spread of the virus, some experts scoff at fever checks. They say that taking temperatures at entry points is a gesture that is unlikely to screen out many infected people and offers little more than an illusion of safety.

The C.D.C. defines a fever as a temperature of 100.4 degrees Fahrenheit or higher. But some reports have questioned the accuracy of thermometer guns, and while temperature checks may identify people who are seriously ill, those people are unlikely to be socializing much or going out for meals. A growing body of evidence also suggests that many of those who are driving transmission are silent carriers — people who have been infected but feel fine and don’t have a fever or other symptoms.

Last week, the Centers for Disease Control and Prevention — which in May told employers to consider checking workers daily for symptoms like fever, but appeared to reverse itself in July — said it would stop requiring airport health screenings beginning Sept. 14 for international passengers from countries like Brazil, China and Iran because the checks do not identify silent carriers.

Temperature checks are akin to “getting the oil checked before you go on a long car trip,” said Dr. David Thomas, an infectious disease specialist at Johns Hopkins University School of Medicine. “It makes you feel better, but it’s not going to keep you from wrecking the car or prevent the tires from falling off.”

“It’s something you can do, and it makes you feel like you’re doing something,” he said. “But it won’t catch most people who are spreading Covid.”