The 2022 National School Fees Report, released on Thursday, revealed WA school fees rose by about 2.8 per cent on average, up from about 0.42 per cent last year. 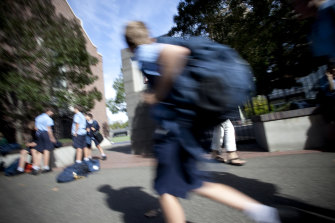 According to the report, produced by Australia-wide education payment provider Edstart, the price hike comes as COVID-19 saw schools face added budget pressure such as extra costs associated with preparing for the pending opening of WA’s border.

The increase comes after many WA schools froze their fees last year to 2020 levels, with some even cutting the annual charge in an effort to ease the financial burden on families.

Out of WA’s 10 most expensive schools, St Hilda’s Girls School in Mosman Park increased its fees the most, jumping by about 3.8 per cent after a freeze the previous year.

The only school in the top 10 list that didn’t increase its fees was St Mary’s Anglican Girls’ School, while all the others chose to inflate their prices by about 2 to 3 per cent.

The report compared year 12 tuition fees, compulsory additional fees and boarding fees at 538 non-government schools in Australia and found fees rose on average 2.9 per cent across the nation, up from 1.05 per cent in 2021, signifying a return in line with pre-pandemic levels.

“However, many schools are conscious of the financial impact on families and have kept increases below inflation, with over half of schools (56 per cent) keeping their fee increases below the Consumer Price Index (CPI),” the report read.

While the highest fees (including additional costs) in WA reached above $30,000 a year for the first time in 2022, it is still much lower than in New South Wales and Victoria, where the highest fees are more than $43,000.

Edstart chief executive Jack Stevens said many of the contributing factors to the increases were out of the schools’ control.

“The transition to the ‘new normal’ of living with the virus means schools are incurring extra costs like additional teaching and support staff, increased cleaning requirements, procurement of rapid antigen tests, and alterations to classrooms to improve air quality,” he said.

“More than half of our Edstart partner schools have indicated to us that the costs of these future-proofing initiatives are having the most significant impact on their budget.

“In addition, changes to the federal government funding model for non-government schools will also continue to impact school budgets this year.”

Despite fee increases returning to pre-pandemic levels, schools have kept the rate of increase in line with inflation, according to Edstart.

Somerset Education director John Somerset said wages and other costs continued to rise at or above CPI, so school revenue must similarly rise to ensure long-term sustainability.

“Schools need adequate operating surpluses to ensure they can sustainably reinvest in crucial facilities and equipment, and also to service loans used to fund buildings and equipment that the students enjoy,” he said.

“As you know costs have increased considerably during 2021 and 2022 due to labour shortages, transport disruptions, extra COVID-related costs.

“So all in all, a return to business-as-usual fee increases in 2022 is very reasonable.”