The search for the second black box of MU5735, the doomed China Eastern Airlines flight that plummeted 29,000 feet into the ground on March 21, is reportedly being hampered by complex coronavirus protocols.

Workers at the disaster scene, in Guangxi, near the city of Wuzhou in southern China, are being required to wear protective suits to guard against the deadly infection.

MU5735, a Boeing 737-800, was carrying 123 passengers and nine crew when it nosedived into the ground, whilst flying from Kunming to Guangzhou. 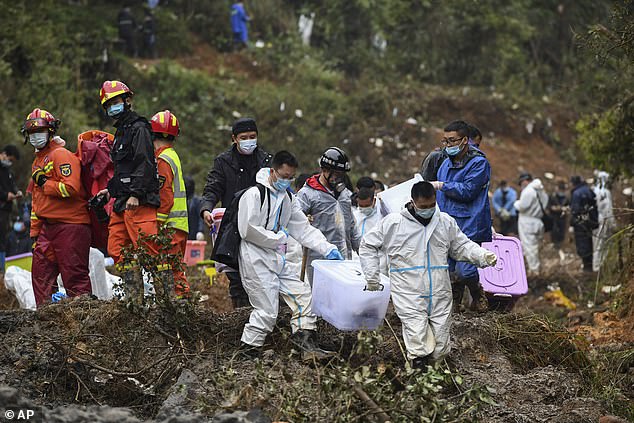 Chinese rescue workers wear protective gear as they recover remains from MU5735, which crashed on Monday near Guangxi 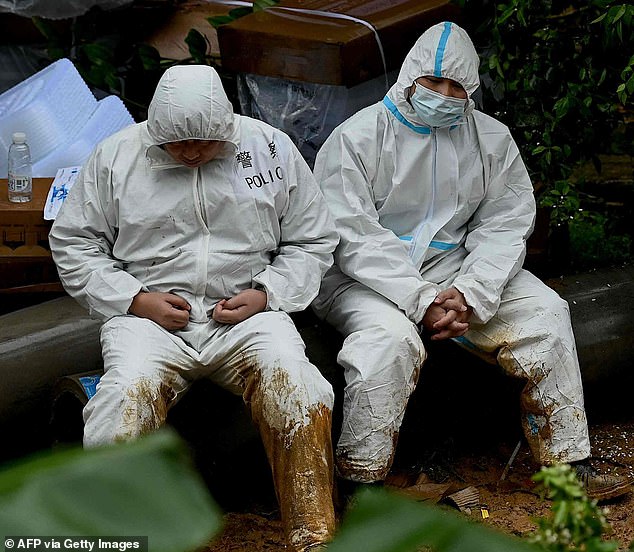 Protective clothing is worn to guard against coronavirus which is currently surging across China – with 5,000 cases reported on Friday

No survivors have been found during a search of the crash site, which has been expanded over an area of 200,000 square metres, and all onboard are now presumed dead.

Rescue workers have found the flight’s cockpit voice recorder, one of two black boxes onboard which record crucial data about the flight.

However they have yet to locate the second, a flight data recorder.

This would provide investigators with details of the communications between the flight’s three pilots, which is one more than is normally required on board a Boeing 737-800 plane.

According to the South China Morning Post, rescue work is being slowed by stringent rules to guard against Covid-19.

‘Given the rain and high temperature, Covid-19 prevention is very important.

‘So everyone working on the scene wears protective suits.’

Some orange debris, the black boxes’ colour despite the name, was found on Friday in Guangxi autonomous region’s Teng county.

Referencing an unnamed source, the CCTV reporter suggested the second black box is likely to be found nearby.

They stated: “It’s likely the second black box is somewhere near the place the orange debris was recovered.”

More than 2,000 people are involved in combing the crash area, with human remains and aircraft wreckage, including parts of the engine blade and wings, having been found.

The Civil Aviation Administration of China (CAAC) is leading the investigation, with a preliminary report expected within the next month. 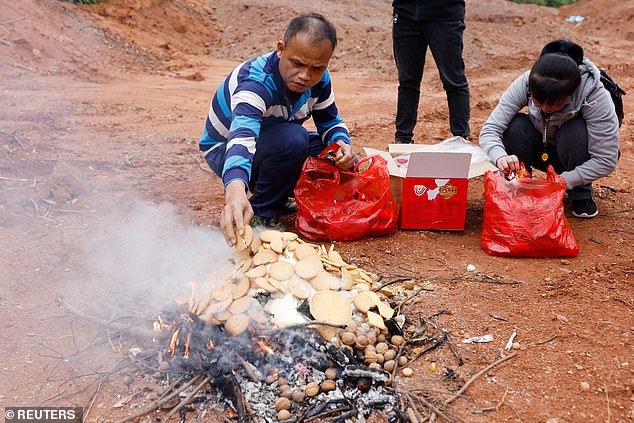 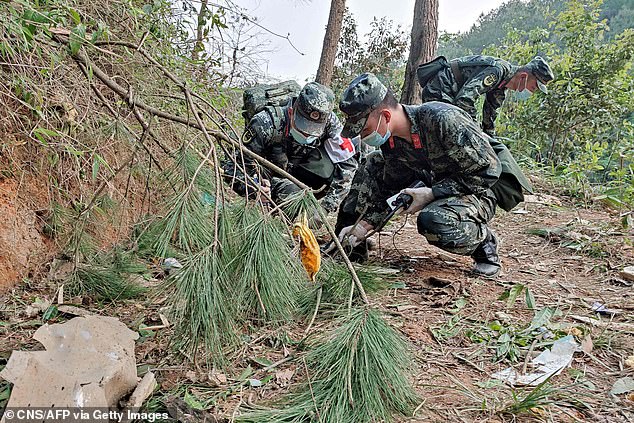 He commented: “The Civil Aviation Administration of China laboratory staff has been intensively repairing and downloading data from the device since they received the recorder.

“There is still no definite time when the download will be completed and analysis can start.”

To establish identities authorities are conducting DNA tests on human remains found, whilst 375 family members of the deceased have visited the crash site.

China’s transport ministry said China Eastern has grounded all of its 737-800s, a move that could further disrupt domestic air travel already curtailed because of the largest Covid-19 outbreak in China since the initial peak in early 2020.

The Boeing 737-800 has been flying since 1998 and has a well-established safety record. It is an earlier model than the 737 Max, which was grounded worldwide for nearly two years after deadly crashes in 2018 and 2019.

China is fighting a surge in coronavirus cases, more than two years after the pandemic began, with nearly 5,000 cases recorded on Friday.

Experts have blamed the renewed spread on the highly transmissible Omicron variant, which is harder to contain than the original form of Covid-19 which emerged in China’s Hubei Province in late 2019.

More than 5,000 deaths have been reported in Hong Kong alone, with the city suffering the world’s highest coronavirus mortality rate.

Experts have blamed this on low vaccine update, particularly amongst the elderly, and China’s only partially effective Sinovac jab.