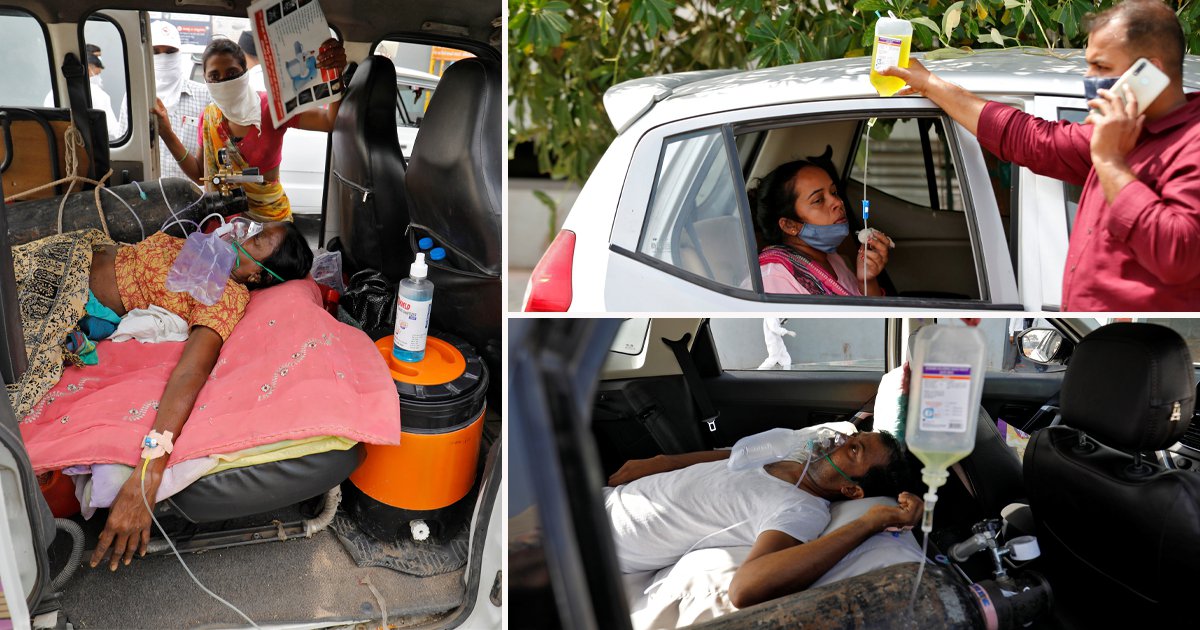 Coronavirus patients in India are being tended to in cars by their loved ones while they wait to get into hospitals.

Many overcrowded health centres have run out of medical supplies – but the worst is likely yet to come as the country’s desperate health crisis deepens. Makeshift facilities for seriously ill people are cropping up across the country, with pictures showing relatives trying to help their stricken loved ones through car windows in hospital car parks.

The horrific situation in the country has seen the authorities struggling to burn bodies quick enough – as the remains of Covid patients pile up.

Countries including the UK have pledged to send urgent medical aid to help battle the crisis, which is fast overwhelming local hospitals.

Facilities in Delhi and elsewhere turning away patients after running out of supplies of medical oxygen and beds.

A spokesman for the Sir Ganga Ram Hospital in the capital, New Delhi, explained: ‘Currently the hospital is in beg-and-borrow mode and it is an extreme crisis situation.’

Mona Desai, a former president of the Ahmedabad Medical Association, added: ‘The problem is grim everywhere, especially in smaller hospitals, which do not have central oxygen lines and use cylinders.’

On Sunday, Prime Minister Narendra Modi urged all citizens to get vaccinated and exercise caution, while hospitals and doctors have put out urgent notices saying they were unable to cope with the rush of patients.

In some of the worst-hit cities, including New Delhi, bodies were being burnt in makeshift facilities offering mass services.

Local media broadcast images of three health workers in the eastern state of Bihar pulling a body along the ground on its way to cremation, as stretchers ran short.

Vipin Narang, a political science professor at Massachusetts Institute of Technology (MIT) in the United States, tweeted: ‘If you’ve never been to a cremation, the smell of death never leaves you.

‘My heart breaks for all my friends and family in Delhi and India going through this hell.’

The world’s second most populated country has confirmed some 17.31 million infections and 195,123 deaths since the crisis began.

Another 2,812 deaths were confirmed in the latest health ministry toll, but health experts say the death count is probably far higher.

Politicians in the country, especially Mr Modi, have faced criticism for holding rallies attended by thousands of people, packed close together in stadiums and grounds, despite the brutal second wave of infections.

Several cities have ordered curfews, while police have been deployed to enforce social distancing and mask-wearing.