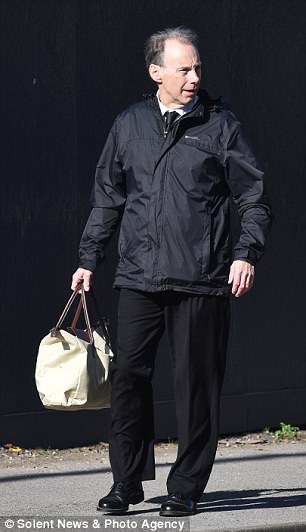 A bigamist who set himself up with a new wife and children but continued to call his first wife every day for 17 years was today jailed for eight months.

Neil Rattue, 60, was married to his first wife Susan for 15 years, buying a home together which he said they had to sell and move in with her mother because they were in debt.

Fifteen years after his first wedding, he forged a divorce certificate so he could marry his second wife Rebecca, with whom he had two children and lived 256 miles away.

Though he stopped seeing his first wife in 2001, he dutifully continued to call her daily for 17 years to ask how she was and discuss their debts, which she was paying off.

A court previously heard Susan had paid off £30,000 of debt, from credit cards and loans taken out with Rattue, but still had a ‘staggering’ £37,500 to be paid.

Judge Richard Parkes QC today said Rattue had been ‘cowardly’ and ‘deceitful’ in maintaining his marriage to Susan despite having started a new life without her.

Salisbury Crown Court, Wilts, heard today Rattue had met his first wife Susan in Wiltshire in 1980 and they were married three years later.

The bigamist, who often worked away, then met his second wife Rebecca while in Stratford-upon-Avon.

The pair, who married on October 3, 1998, lived together in York, North Yorks, having two children together.

It was heard Susan was left with tens of thousands of pounds worth of debt, incurred after she and Rattue had taken out loans and credit cards in the 1980s.

Prosecutor Phillip Warren said Rattue had taken a friend’s divorce certificate without him knowing, before using it to forge his own.

Mr Warren said: ‘The marriage between [Rattue and Susan], one might say coloquially, drifted apart. He was working away a lot.

‘They had a house together, which they sold and moved in with Susan’s parents. She, it seems, got nothing out of the proceeds.

‘Mr Rattue then met the second Mrs Rattue. He had taken up with her in the normal way, but for the fact he was already married.

‘There was, he says, pressure from her family for them to get married and have children.

‘Another factor of this case is that the defendant produced a doctored decree absolute to a registrar to establish his eligibility to get married. 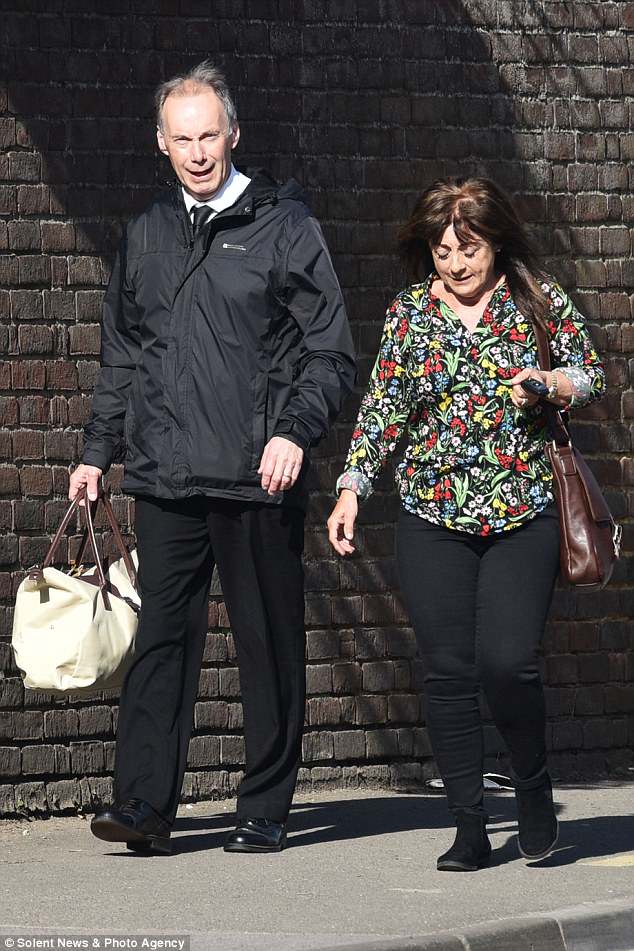 Fifteen years after his first wedding, Rattue (pictured outside court with a friend) forged a divorce certificate so he could marry his second wife

‘The decree absolute that [Rattue] used [to prove he was divorced] was that of a friend, Paul Reid.

‘Mr Reid showed him the decree absolute. The defendant got hold of that without Paul knowing and photocopied the document.

‘He then changed the names and he produced that document to Rebecca to reassure her that he was not married.

‘When it was shown to York County Court [before Rattue’s second marriage], it seems nobody looked at that document as well as should have been.’

Rattue, of York, admitted bigamy at a a hearing at Salisbury Magistrates’ Court last month.

The court today heard a victim statement from Susan Rattue, read out by the prosecutor, who said she felt like her husband had ‘stolen her life’ from her.

She said: ‘Why did he not ask me years ago for a divorce or when he met his new wife? Instead he was leading a double life.

‘I have spent the last 19 years living with my mum as he left me with no other option. I am paying for this both mentally and emotionally.

‘He has stolen my life from me.

‘I could have remarried and moved on. I could have had children. It hurt me to learn he has gone on to have children of his own.

‘We were still married but I did not see my husband.

‘I was having to work a lot of overtime in the hospital to pay off my debts. I could not get a mortgage with my debts and would not want to give a partner the baggage.

’18 months ago he would still phone me at work every day where he would ask me how I was. He still made me pay off all the money.

‘He said we have got to stay married for the purpose of the loan and I believed him. Little did I know, it was because he had already forged our divorce certificate.

‘This has been a prison sentence since 2001 when he left and stole my life from me.’

In mitigation, Nicholas Cotter, for Rattue, said that his client had acted in a ‘cowardly fashion’ and should have dealt with the matter in his 20s or 30s.

He said: ‘There’s not many sights sadder than a man of an older age and good caharcter coming to court with a bag and entering the dock.

‘This does not just affect him but his two wives and two children. He has acted in a cowardly fashion.

Appealing for his client not to be prisoned, Mr Cotter added: ‘I do not think it helps anyone else [for him to go to jail].’

Sentencing him to eight months in prison, judge Richard Parkes QC said a prison sentence was ‘unavoidable’ after Rattue, who stared down at his feet, had acted in such a ‘cowardly’ way.

The judge said: ‘You pleaded guilty at the first opportunity to the offence of bigamy.

‘You have been a cowardly and deceitful man. You kept Susan married to you by telling her it was necessary for the debt repayments.

‘She has been left owing a staggering amount, meanwhile you were saving money with Rebecca for a family home.

‘This case undoubtedly meets the custody threshold. You shall go to prison for eight months.

‘I am not going to make a compensation order simply because it is not possible for the court to quantify this. But I undertand there are proceedings ongoing to resolve this matter anyway.’