A government watchdog has ruled changes to Crossrail’s designs and mismanagement by bosses have added unnecessary costs to the £17.6billion project.

Changes to designs and contractors’ delivery schedules cost around £2.5 billion between 2013 and 2018, according to the National Audit Office’s analysis.

A report by the NAO highlighted several other factors which contributed to the spiralling budget of the delayed scheme to build a new east-west railway in London.

These include a focus on achieving the planned opening date of December 2018, the absence of a detailed plan to track progress and a lack of pressure on key contractors to work efficiently.

Delays were compounded when testing of train and signalling systems were carried out in early 2018. A report said ‘few meaningful results could be acquired’ because of a software problem. 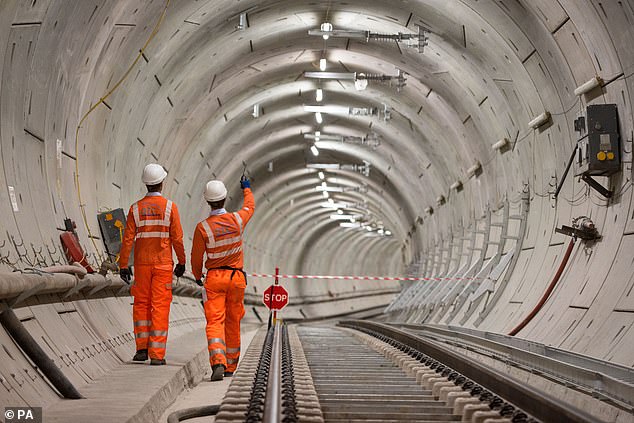 Changes to designs and contractors’ delivery schedules to the Crossrail project cost around £2.5 billion between 2013 and 2018, a report found (file image) 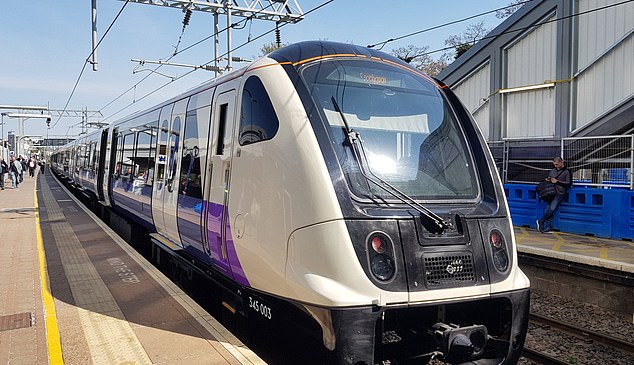 The line was due to open in 2019 but has been further delayed to 2021, it was announced last week (file picture)

This took time away from those involved in construction work.

Crossrail is being jointly funded by the Department for Transport and Transport for London.

It is ‘not possible to conclude overall value for money’ until services begin and the final cost of the programme is known, the NAO warned.

Crossrail Ltd, the company building the railway, announced last week that services in the central section between Paddington and Abbey Wood will begin by March 2021 at the latest, although Bond Street station will not be ready.

Full services across the line from Reading and Heathrow in the west to Abbey Wood and Shenfield in the east will begin ‘as soon as possible’.

The railway will be known as the Elizabeth line once it has opened.

Amyas Morse, the head of the NAO, said: ‘Throughout delivery, and even as pressures mounted, Crossrail Ltd clung to the unrealistic view that it could complete the programme to the original timetable, which has had damaging consequences.

‘DfT and TfL must support the new Crossrail Ltd executive team to get the railway built without unrealistic cost or time expectations.

‘While we cannot make an overall assessment of value for money until Crossrail is complete, there have been a number of choices made in the course of this project that have clearly damaged public value.’

Crossrail Ltd chief executive Mark Wild said: ‘We take the views of the National Audit Office very seriously and will be reviewing their recommendations carefully.

‘I share the frustration of Londoners that the huge benefits of the Elizabeth line are not yet with us.

‘A new leadership team and enhanced governance structure has been put in place to strengthen the Crossrail programme and put the project back on track.

‘The new team has undertaken a detailed audit of the outstanding works and produced a robust and realistic plan to complete the Elizabeth line and bring the railway into passenger service at the earliest possible date.’

The complete history of Crossrail: How project was first envisioned in 1880… to be built nearly 100 years later

1880  The idea for a scheme like this actually began more than one hundred years ago, with a company called the Regents Canal & Railway Company which lobbied for permission to build a railway that would link Paddington with London’s docks.

1974 The idea was not forgotten as London continued to grow and flourish. In the 1974 London Rail Study, published by the then Greater London Council and Department for Environment, the line finally got a name – Crossrail.

Unfortunately, the study estimated the cost of such a scheme at £300m, and thus although it recommended feasibility studies be undertaken as a priority, it could do little more.

Although the 1980 discussion paper ultimately led to nothing, the looming threat of Underground congestion that both it and the 1974 study had highlighted continued to develop.

1989  The government commissioned and published the Central London Rail Study in 1989 – a report which took many of the schemes highlighted in the 1974 study and developed them into more concrete schemes.

In November 1991, a private bill was submitted to Parliament. The cost of the Crossrail scheme was given as just over £2bn at 1993 prices

The onset of the recession in the early 1990s, combined with the increased constraints on public finances, proved key factors that lead to Parliament rejecting the Bill in May 1994.

1994 In July 1994 it was announced that the Crossrail project would be pushed forward under the Transport and Works Act (TWA) system, which had replaced private bills as the procedure by which large infrastructure projects could be brought about.

Before the draft order was lodged, however, the Government commissioned a further study to determine whether any smaller scale alternatives could achieve the same benefits as Crossrail.

2000  Cross London Rail Links Ltd (CLRL), jointly owned by the SRA and Transport for London (TfL), was set up to undertake project definition work on a Crossrail link and a feasibility study of a possible Hackney-southwest London scheme. CLRL’s initial budget was set at £154 million and the company was launched in January 2002.

2005 A Crossrail Hybrid Bill was presented to Parliament in February 2005 and the principle of the scheme was established at the second reading debate in July.

2009 After 35 years of planning and development, Crossrail finally broke ground on 15 May 2009 at Canary Wharf, when the Mayor and the then Transport Secretary Lord Adonis launched the first pile into the North Dock in Docklands at the site of the new Canary Wharf station.

2012 Crossrail tunnelling began in May 2012 and ended at Farringdon in May 2015 with the break through of tunnelling machine Victoria.

2018 All of the permanent track was installed and the new Elizabeth line trains were being tested using the line’s new automatic train control system which operates in the central section of the route.

The line was due to open in December but has been delayed for further testing to be carried out.

2019  Crossrail says software problems in its 2018 tests mean ‘few meaningful results’ were recorded. This meant further delays to construction and the opening of the central section of the line between Paddington and Abbey Wood is delayed until March 2021. Bosses say Bond Street station will not be ready by this point.