Huge hound mauled my chihuahua! Crufts judge is quizzed by police after her two giant dogs attacked a toy-sized pooch 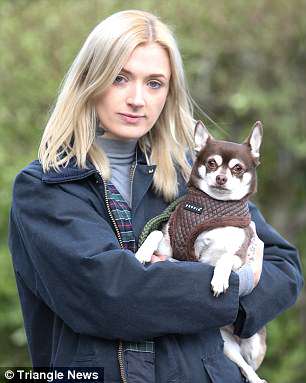 Ella Tramonte, described how one of the deerhounds grabbed Rolo in its mouth

A Crufts judge faces a police probe after one of her deerhounds savaged a chihuahua in the grounds of a stately home.

Breeder Joan Wragg was holding her two giant dogs on leads when they dragged her across a pathway towards the toy-sized pet, named Rolo.

The chihuahua’s owner, Ella Tramonte, described how one of the deerhounds then grabbed Rolo in its mouth, and only let go when her boyfriend Elliot Hills leapt forward to prise open the dog’s jaws.

Rolo suffered a puncture wound and was left bleeding and with loose fur following the incident at Mottisfont, a National Trust property in Romsey, Hampshire, last month.

Mrs Wragg, 75, who judged at Crufts in 2017, has now been reported to police for allegedly having an out-of-control animal.

The couple, both 25, had stopped off at the 13th century country estate to exercise the seven-year-old pet ahead of a family party they were travelling to.

Miss Tramonte, a business analyst, said the couple had been walking for less than ten minutes when they saw the deerhounds lying beside a path with their owner.

She added: ‘They were huge, two great big shaggy, grey things. The lady that was holding them was looking at something. 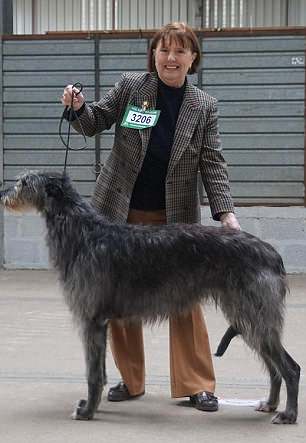 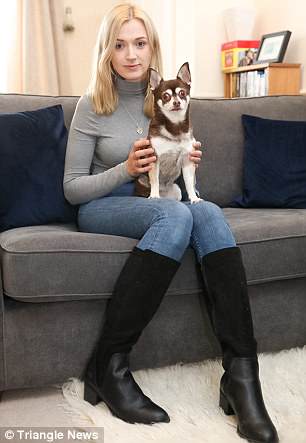 Joan Wragg, 75, (pictured left) who judged at Crufts in 2017, has now been reported to police for allegedly having an out-of-control animal. Rolo suffered a puncture wound and was left bleeding and with loose fur following the incident at Mottisfont

‘We had gone to walk past them and the dogs had got up, pulled her across the path and one had picked up my chihuahua in his mouth. They just lunged over and grabbed him and luckily my boyfriend managed to get him off. I grabbed my dog and curled up in a ball around him in case it tried to get him again.

‘It was so quick. She [Mrs Wragg] just stood there. She didn’t even seem that shocked.’

Miss Tramonte, from Witney, Oxfordshire, said as they went to leave to take Rolo to a vet they encountered Mrs Wragg again.

She added: ‘We confronted her there and said, “Look what you’ve done to our dog.” ‘That was when it got quite heated. We asked why she was taking these dogs out if she obviously couldn’t control them. She’d been pulled halfway across the path. Why were they not muzzled?

‘She just said they were gentle and we were like, “Clearly not. Look at my dog.” Elliot was so upset as he said it could have been a baby.’

Mrs Wragg, who has edited the Deerhound Club’s newsletter, paid the £314.55 emergency vet’s bill, but Miss Tramonte says she has never said sorry or emailed the couple to ask after Rolo. However, she is said to be ‘mortified’ by what happened.

When approached at her home in Huntworth, Somerset, Mrs Wragg denied her pets were off the lead or out of control. 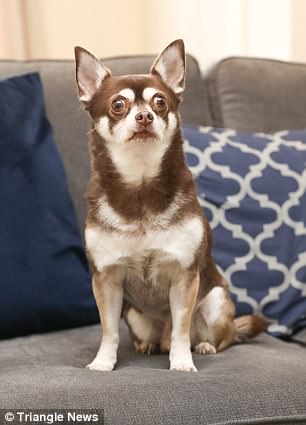 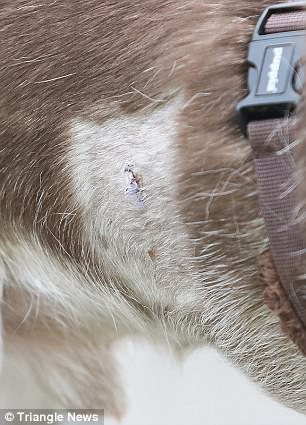 Ms Tramonte, described how one of the deerhounds then grabbed Rolo in its mouth, and only let go when her boyfriend Elliot Hills leapt forward to prise open the dog’s jaws

The chihuahua is the smallest breed of dog and is named after a state in Mexico.

They became popular in the 1800s as companion dogs for women

The average male is around 9in tall and weighs 4lb 4oz

Despite their tiny size, they are feisty and can take on larger breeds

They should not roam outside unsupervised.

This is because due to their small size, they are not safe from the likes of hawks and most other wild predators

Deerhounds were once known as the royal dogs of Scotland, as only nobles were allowed to keep them

Originally bred to hunt deer, they are quick off the mark when the spot potential prey. Owners are advised to take care when wildlife is nearby

Loyal but stubborn, they have been place on the UK’s native vulnerable breed list although their numbers are increasing steadily

She said: ‘I’m a responsible dog owner and immediately apologised for my dogs turning on the chihuahua.’

But Miss Tramonte insisted: ‘She was completely unaware of the severity of the situation. She said it was a stressful day for everyone but she didn’t seem to be stressed by it at all.

‘An experienced dog handler should not be allowing their animals to pull them along. I would never have taken one of those dogs out, let alone both.’

A Hampshire Police spokesman said: ‘We are currently looking into a report of an incident at Mottisfont Abbey on April 20 between 1.25pm and 1.35pm.

‘A 25-year-old man was scratched by two dogs as he intervened to separate the dogs from his dog.’