Havana: Cuban authorities said the fiery crash of an aging Boeing passenger jet on Friday shortly after takeoff from Havana had killed 110 of the 113 on board, making it the Caribbean island's deadliest air disaster in nearly 30 years.

Flags flew at half-mast in Cuba on Saturday, marking the start of two days of national mourning while authorities worked to recover evidence from the site of the crash and to identify the crash victims.

Fifteen have been identified so far and one black box retrieved, officials said.

Damojh declined to comment while Mexico's Directorate General of Civil Aeronautics said a new audit of the company would be undertaken to ensure it was still "fulfilling norms".

Meanwhile, Cuban authorities told a news conference on Saturday at Havana airport that 99 of the passengers killed on the domestic flight to the eastern city of Holguin were Cuban, while three were foreign tourists – two Argentines and a Mexican – and two were Sahrawi residents in Cuba.

Ten Nazarene pastoral couples returning home after a retreat were among the victims, the Cuban Nazarene Church said.

Three Cuban women survived the crash, but are still in critical condition, said the head of the hospital where they are being attended.

"My daughter is a fighter, she's strong, she'll save herself," said Amparo Font, the mother of 23-year-old survivor Gretel Landrove, with a trembling voice and tears welling. 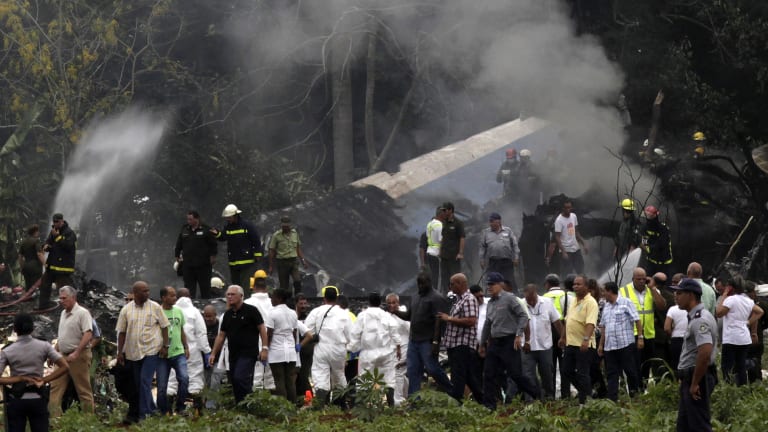 Cuban authorities have said 110 of the 113 passengers have died in the the Caribbean islands’ deadliest air disaster in 30 years.

Outside the morgue, distressed relatives cried and hugged one another, as they gave authorities information on loved ones to aid in the identification process. "This is a very unexpected death, she didn't deserve it. My grandmother was a strong person," said Katherine Lucia Martinez, 18, bursting into tears and clinging to her father.

Her 60-year-old grandmother was among the dead, and she was waiting with other relatives of the deceased at a Havana hotel for an update from authorities.

President Miguel Diaz-Canel on Saturday visited the morgue, a day after reviewing the site of the crash, which is the first big test of his presidency after taking the reins from Raul Castro last month.

Some locals who saw the crash say one of the engines appeared to have caught fire before the plane hit the ground.

"The plane was on fire, it flipped and then nosedived," said farmer Marino Perez Alvaredo.

Cubana leased the jet less than a month ago, Transport Minister Adel Yzquierdo said on Saturday. The carrier was struggling to meet demand for flights and was serving many domestic routes by bus instead.

Cuba often resorts to leasing due to the decades-old US trade embargo which makes it difficult to acquire newer aircraft, Yzquierdo said. Damojh operates three planes, according to the Mexican government.

Ovidio Martinez Lopez, a retired Cubana pilot, wrote in a widely-shared post on Facebook that Cuban airlines had leased planes from Damojh in 2010 and 2011, but one of its aircraft dropped off the radar while over the city of Santa Clara.

Cuban officials suspended the captain and co-pilot of that flight for "problems and serious lack of technical knowledge," he said, and Cuba's aviation security authority had recommended Cubana no longer lease from them.

Separately, a pilot who used to work for Damojh was quoted on Saturday by Mexican newspaper Milenio criticising the company for lack of adequate maintenance of planes.

"I experienced several incidents at this company, like engine failure or the electrical system went when we took off from Mexico on one occasion," Marco Aurelio Hernandez was quoted as saying.

Cuban investigators have so far recovered the cockpit voice recorder in "good condition," Yzquierdo said, and are still looking for the flight data recorder.

The crash was the worst in Cuba since a Soviet-built Ilyushin-62M passenger plane crashed near Havana in 1989 killing all 126 people on board and another 14 on the ground.