Girl kicks football into a dustbin after creating an elaborate chain reaction using a clothes line, garden chairs and even a car’s windscreen wipers

This is the moment a simple challenge to kick a football into a nearby bin was transformed into an elaborate chain reaction sending balls rolling around a back garden and finally into a front driveway dustbin.

An unnamed girl, from Penrith in Cumbria, found a new and inventive way to keep busy during lockdown with the football-themed obstacle course.

In a video posted online, the woman filming says ‘I bet you £10 you can’t get that ball in the bin.’ 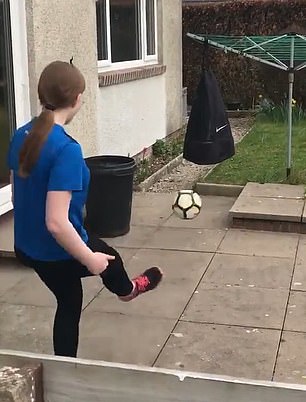 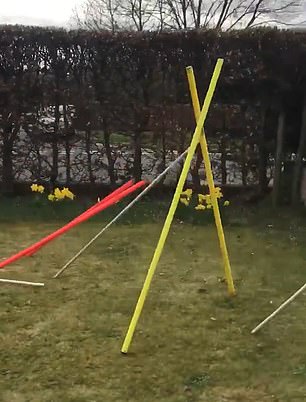 A girl from Cumbria created an elaborate chain reaction trick to land a football in a dustbin on her driveway, starting when she kicks the ball towards her washing line

At first it looks like she misses as the ball flies past the dustbin next to her, but instead the girl sets off a chain reaction by kicking the ball at a bag hanging on a rotary washing line.

A ball travels down a ramp, hitting a line of plastic chairs that tumble like dominoes before tipping the next ball on its way.

After another domino effect is used, a third ball flies out of a dustbin lid, rolling towards the car parked in their driveway.

The fourth football used is placed between two flags, which is nudged out of place to hit the back of the car. 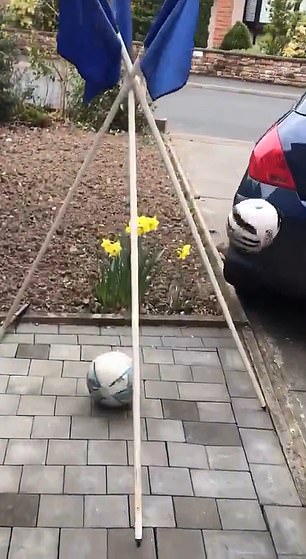 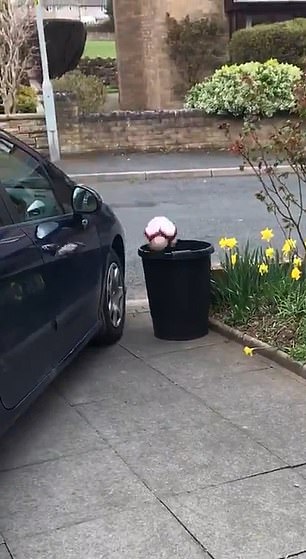 The trick ends as the car rolls down the driveway towards the bin waiting at the bottom of the drive. For the grand finale, the windscreen wipers knock the football into the dustbin

For the grande finale, the car rolls towards the dustbin at the front of their driveway, where the final ball is pushed from the windshield by the windscreen wipers and into the bin.

The woman filming laughs as the final football successfully drops into the dustbin, completing the elaborate obstacle course.

A grand total of six footballs were used in the chain reaction trick, showing the new and inventive ways families are keeping busy during lockdown.