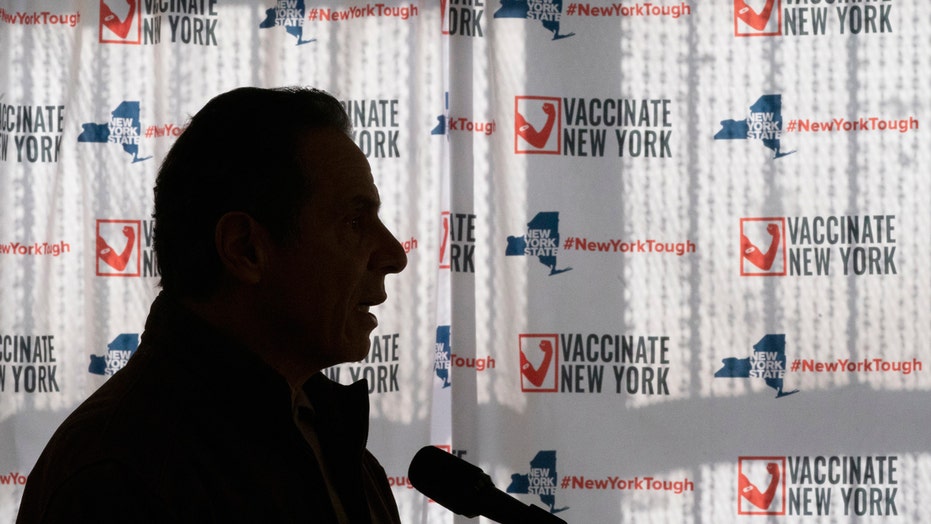 And thousands of additional coronavirus-positive patients were sent to nursing homes under the governor’s widely criticized directive back in March.

“The big picture is that the nursing home pandemic in New York, the way it affected nursing homes in New York, was much, much worse than we knew,” said Bill Hammond, senior fellow for health policy at the Empire Center think tank in Albany. “And it was much, much worse than state officials were admitting. And by state officials I mean Gov. Cuomo and the health commissioner.” 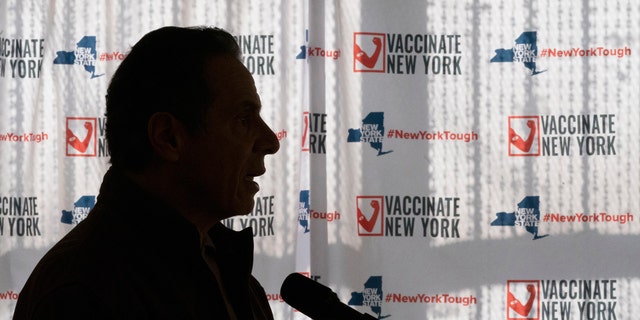 FILE – In this Saturday, Jan. 23, 2021 file photo, Gov. Andrew Cuomo speaks to reporters during a news conference at a COVID-19 pop-up vaccination site in the William Reid Apartments in the Brooklyn borough of New York. More than 9,000 recovering coronavirus patients in New York state were released from hospitals into nursing homes at the height of the pandemic under a controversial order that was scrapped amid criticisms it accelerated outbreaks, according to new records obtained by The Associated Press. (AP Photo/Mary Altaffer, Pool)

“Up until about 10 days ago, the official death toll was about 9,000,” at nursing homes and other long-term care facilities, Hammond said. “It’s not that more people died in that time, it’s that we have a more accurate count.”

NY UNDERCOUNTED NURSING HOME CORONAVIRUS DEATHS BY AS MUCH AS 50%, STATE AG SAYS

Initially, state health officials were only releasing numbers of people who physically died within the nursing facilities – but they were leaving out sick patients who had been transferred to hospitals with severe cases.

“That turns out to be a lot of people, thousands of people, and we knew that they were doing it this way, they admitted it,” he said. “But they never gave a good reason for doing it that way.”

That raised questions from reporters, researchers and even state legislators, Hammond said – and the administration’s response was to continue withholding the information.

At least 14,100 nursing home or assisted-living facility residents have died from the coronavirus, according to the new data – with another 949 victims from other adult-care facilities confirmed or presumed to have died from the illness, the Wall Street Journal reported Thursday.

That marks the second correction of underreported deaths in as many weeks.

New York Attorney General Letitia James’s office said on Jan. 28 that the state had undercounted its death toll from the coronavirus linked to nursing homes by as much as 50%.

“The attorney general’s report confirmed what many of us already knew: The Cuomo Administration intentionally withheld information from the public, because the COVID-19 reality in nursing homes was far worse than anyone imagined,” William Barclay, the Republican leader in New York’s State Assembly, told Fox News Thursday. “Democrats in the Legislature have the ability to compel testimony from Health Commissioner [Dr. Howard] Zucker and obtain documents explicitly detailing exactly what happened surrounding the governor’s March 25 order to admit COVID-19 positive residents to state nursing homes. It’s time they do it.”

The administration has been plagued by criticism over a controversial move on March 25, when Cuomo told nursing facilities to accept patients who had confirmed or suspected coronavirus cases.

Hammond said the data from his request significantly increased the total number of cases, but trends remained consistent in terms of when spikes in cases occurred, shedding little new light on the governor’s controversial order.

But in response to a separate freedom of information request this week, state health officials told the Associated Press that more than 9,000 virus patients had been sent into nursing homes in the state before Cuomo reversed the directive on May 10.

“At least 98% of nursing home facilities in the state had COVID in their facility before their first admission or readmission, and as we’ve seen across the nation, the major driver of infections appears to be from asymptomatic staff through no fault of their own,” state Health Commissioner Dr. Howard Zucker said in a statement. He added that the March 25 order followed Trump administration guidance, a point Cuomo has also made.

The revelations undercut some of the “good will” Hammond said Cuomo earned during his daily press briefings at the height of the outbreak in New York.

“He was saying things about the situation in New York’s nursing homes that were sort of obviously misleading and false,” he said. “I don’t think he understands the point about why his briefings worked was that they were largely about transparency and real-time access to data.”

Cuomo wrote a book about his pandemic leadership and previously used the since-debunked lower numbers in an effort to illustrate his success at piloting the Empire State through its pandemic ordeal.

The New York Post reported Thursday evening that a top Cuomo aide told Democratic state lawmakers in private that the state had concealed nursing home data in order to prevent the Trump administration from finding out.

His office did not immediately respond to a Fox News request for comment.