State schools reopen amid tight security after fighting broke out on Sunday between ethnic Sinhalese people and Muslims. 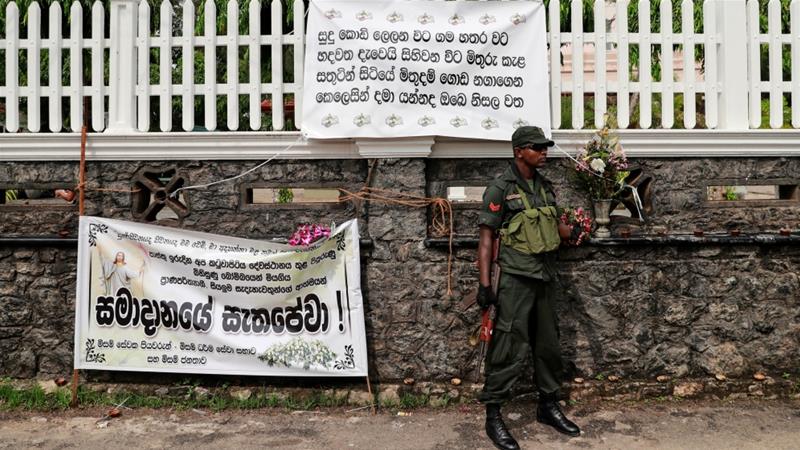 Sri Lanka has imposed a curfew in the city of Negombo, site of one of the Easter Sunday bombings, to contain religious violence.

St Sebastian’s Church in majority-Catholic Negombo was among the six sites bombed in the Easter Sunday bombings that killed 257 people.

“At least two motorcycles and two three-wheel taxis have been damaged in the clashes,” a police officer told AFP news agency. “We declared a curfew till 7am (01:30 GMT) to contain the unrest.”

There were no immediate reports of casualties.

The country’s main international airport is located in the area, but police said there was no disruption to airport traffic. Elite Special Task Force commandos were deployed to patrol the streets, police said.

The senior officer said an investigation was under way into the clashes, the first violence between Muslims and Christians since the April 21 attacks targeting three churches and three luxury hotels in the country.

The Sri Lankan government has also reimposed a ban on social media platforms in an effort to stop the spread of rumours after the violence.

Sri Lanka has been under a state of emergency since the suicide bombings. Security forces and police have been give sweeping powers to arrest and detain suspects for long periods.

Police spokesman Ruwan Gunasekera said: “Police and soldiers combed school premises and the surrounding areas to make sure it is safe for children to go back” on Monday.

Home Affairs Minister Vajira Abeywardena said 200 Muslim scholars were found to have overstayed visas, for which fines were imposed and they were then expelled.

“Considering the current situation in the country, we have reviewed the visas system and took a decision to tighten visa restrictions for religious teachers,” Abeywardena told AFP.

“Out of those who were sent out, about 200 were Islamic preachers.”

Last week, Sri Lankan police released the names and photographs of nine alleged suicide bombers who carried out the attacks, all belonging to an offshoot of a local group called National Towheed Jamaat.

They included Mohamed Zahran, also known as Zahran Hashim, who was described as the attack’s leader, and the wife of another suicide bomber who blew herself up along with her children and three police officers, at a villa belonging to her father-in-law, who was a prominent spice trader.