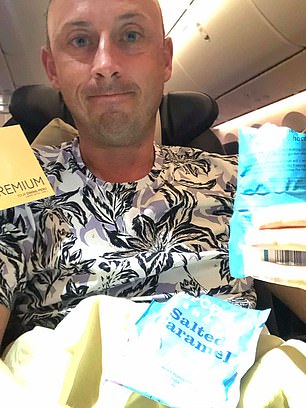 A newly-wed was left furious after he paid an extra £500 to upgrade his 10-hour flight only to end up with nothing but ‘popcorn and crisps to get him through’.

James Howe booked his flight in July through TUI and ordered a gluten-free meal for the return journey from his honeymoon in Cancun, Mexico, to Gatwick Airport.

The 39-year-old from Watford suffers from coeliac disease and was told after take-off that there was no three course, gluten-free meal available.

Desperate cabin crew even checked the captain’s meal to see if it could be safely served up to him.

Mr Howe and his new wife Claire spent £5,500 on the break, paying £1,000 extra for premium seats because it was their honeymoon.

After the flight on October 18, a furious Mr Howe took to Facebook to complain to TUI, who claim online that their catering options offer an ‘abundance of choice’.

He posted a photo of himself posing with the snacks with the caption: ‘Thanks TUI, this was the gluten free meal option given in premium flight on our way home from Mexico.

‘Popcorn and crisps to get me through 10+ hours. Fabulous way to end our lovely honeymoon.’

He added; ‘People beware if you book a meal ‘they are subject to availability and nothing is guaranteed.’

‘Well sorry I won’t be booking another holiday with you and advising anyone to go anywhere near a TUI shop.’

Speaking today he said he had pre-booked the gluten-free option when he first booked the holiday back in July.

‘My flight from Gatwick to Cancun was fine my meal was ready and nice. My flight back however – nothing.

WHAT IS COELIAC DISEASE?

Coeliac disease is a genetic autoimmune disorder in which gluten leads to damage in the small intestine.

Gluten provokes inflammation in the small intestine which affects the body’s ability to absorb nutrients from food.

The condition is estimated to affect one in 100 people worldwide.

One percent – or three million Americans – are living with coeliac disease.

There are more than 200 symptoms of coeliac disease but the more common ones are:

The only treatment for the disease and is a strict gluten-free diet.

Only foods and beverages with a gluten content less than 20 parts per million are allowed.

‘When food was coming round they had no indication of my needs. There were gluten meals on board, as other passengers had some. As we had already taken off, there was nothing the crew could do.

‘The crew at one point brought out all the captain’s food to read the packaging, but none of this was suitable. They could see how hungry I was.’

His post sparked condemnation from fellow social media users, with many saying the treatment he received was ‘terrible’.

Kelly Wombwell said: ‘Awful James.’ This is while Emma Roberts added: ‘Disgusting, how can large companies like this provide such poor service?’

Tui state on their website that ‘a standard meal is included’ on long haul flights.

They also boast of the variety available on boarding, saying: ‘On board, you can enjoy our offer of hot and cold drinks, (non-)alcoholic drinks, sandwiches and snacks.

‘You can choose what you want to eat or drink and there’s an abundance of choice.’

Coeliac disease is an autoimmune condition where the body mistakenly attacks substances found inside gluten, causing inflammation of the small intestine.

In a statement TUI said: ‘We’re very sorry to hear of Mr Howe’s experience on his journey home from Cancun.

‘We have contacted the customer directly to apologise and offer a gesture of goodwill.’