The torrential rain afflicting Sydney is expected to ease significantly on Wednesday, but not before dangerous winds compound the wild weather which has sent flood levels on their way to eclipsing last year’s levels and prompted evacuation alerts from Manly to Mulgoa.

The Bureau of Meteorology issued a severe thunderstorm warning for Sydney’s north just before 3pm on Tuesday, bringing “intense rainfall that may lead to dangerous and life-threatening flash flooding”. The storm had moved into the Mona Vale and Terrey Hills area by 3.30pm. 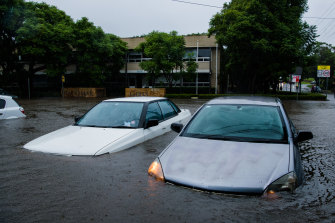 An evacuation warning was in place for low-lying areas near Manly Dam on the northern beaches, with residents on alert for the dam to start spilling over. An initial “red alert” advising people to “get out now” was quickly downgraded to amber on Tuesday afternoon with the State Emergency Service saying water levels had started to drop.

“There isn’t a risk of the dam wall breaking, it is more the overflow from the top of the dam,” SES Commissioner Carlene York said.

It is already Sydney’s wettest start to the year on record, with Weatherzone reporting more than 820 millimetres has fallen since January 1. The previous record was 783 millimetres by the same date in 1956.

Senior meteorologist Dean Narramore said the heavy rain would continue on Tuesday night before easing in the early hours of Wednesday and then drying out during the day. Some sunshine is even forecast for Thursday.

“There is some good news, the low-pressure system is moving off the mid north coast … and that’ll continue to track to the east and south-east,” he said.

“Even though the sun does come out, we are likely to see many of these rivers continuing to experience major flooding and for some, the flood peak won’t occur until Wednesday or Thursday.”

But in the meantime, forecasters were most concerned by escalating winds in Sydney and the Illawarra as the low deepened offshore, making for especially hazardous driving conditions.

“These kinds of wind speeds gusting up to 90km/h are likely to bring down trees and power lines,” Mr Narramore said, warning that 50 or 60km/h winds were enough to bring down power lines. He said the weather system over Sydney and surrounds was “dangerous and rapidly evolving”.

Drivers were warned to take extra care on the roads, avoid unnecessary travel and never drive through flood waters.

“It is good news that it will ease off by Thursday, but we still have a way to go with these thunderstorms,” Ms York said. 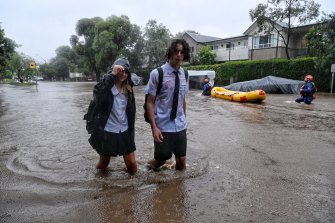 The Hawkesbury and Nepean rivers are already experiencing major flooding and were expected to peak at levels equal to, or higher than, those seen in the March 2021 floods.

Flooding at Penrith remained moderate but would depend on rainfall on Tuesday evening, Mr Narramore said. The south coast had been spared the worst but could still experience minor to moderate flooding.