What’s all the lo-commotion? Daredevil hangs from side of fast moving train before angry passengers beat him for his antics

This is the moment a daredevil hangs on for dear life off the side of a train as locals urge him to climb back in.

Passengers later thrashed him with sticks and kicked him in the head for his dangerous antics.

The incident took place on a train between the cities of Saharanpur and Dehradun in the northern Indian states of Uttar Pradesh and Uttarakhand.

Shocking footage shows how startled travelers called for the daredevil to come back into the train as he ignored their pleas.

As the train rushes through the rural landscape, he calmly continues to hang himself out a door just out of reach of any passing train.

Clinging onto the window bars, he appears to be play up to the cameraperson filming him. 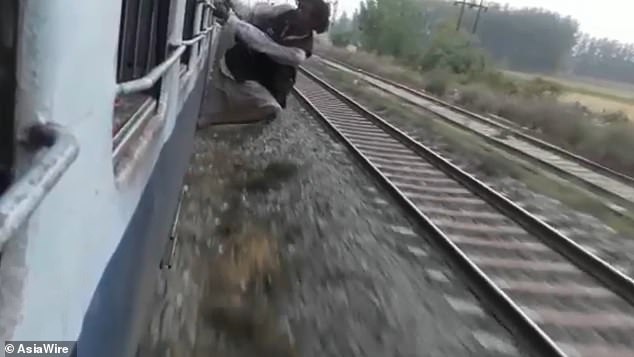 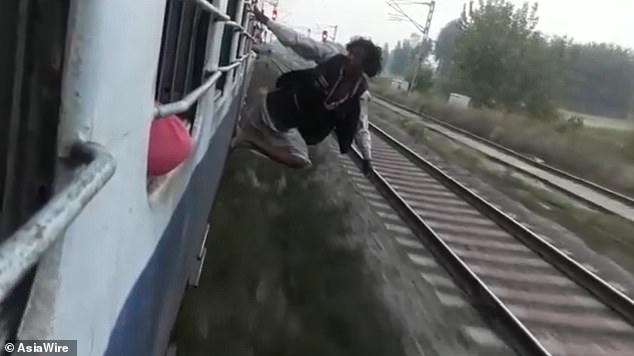 When he later got off at his stop, several angry passengers confronted him and allegedly assaulted him.

Eyewitnesses claimed that the man was rude to the upset passengers and got a beating as a result.

In the next scene, an angry passenger in a yellow top is seen hitting the prankster with a stick before kicking him to the ground.

But when he attempts to leave the train at his stop, it is believed a group of angry passengers took him to one side (in between two railway lines) and beat him to the floor for his antics

He appeared to lay on the tracks while the two other kmen take out their frustration on him.

Passenger then gave him a final boot to the head which appeared to momentarily stun him.

It is unclear whether the authorities are investigating the incident.