Alix Daguin, the daughter of a founder of the meat purveyor, runs All for One One for All Farm in Goshen, N.Y. 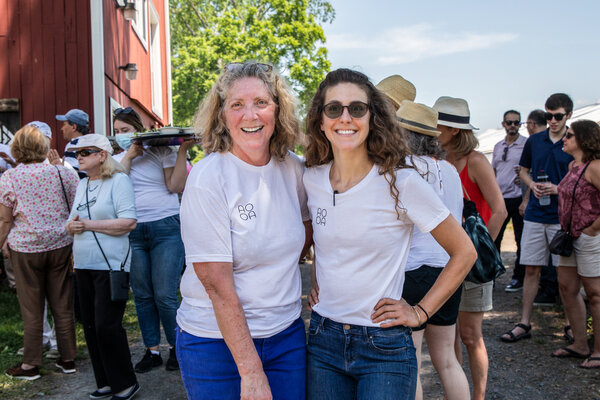 As if she didn’t have enough to do, running D’Artagnan — the meat, poultry, charcuterie (and now also seafood) company that sells to restaurants, stores and consumers — Ariane Daguin, a founder and owner of the company, now has a farm, All for One One for All, in the Hudson Valley. Its grand opening to the public, with a busy farm stand, was June 6. There are 14 rolling acres of planted crops including a small vineyard, trees and livestock like ducks, geese, sheep and chickens. The farm practices silvopasture, meaning the sustainable integration of all these elements. The farm is run by Alix Daguin, Ms. Daguin’s daughter, and its goal is to support their new educational D’Artagnan Foundation, which has started holding workshops for the community. A restaurant, also run for the foundation, is being planned in a big red barn where there is already a kitchen preparing food for the farm stand. There is also a farmhouse dating from 1805. The farm stand is open daily, on the honor system from 9 a.m. to 5 p.m. Mondays through Thursdays, and with personnel from 11 a.m. to 7 p.m. Fridays, Saturdays and Sundays.

All for One One for All Farm, 221 Craigville Road (Coleman Road), Goshen, N.Y., alloneoneall.com.