David Cameron has revealed intimate details of his marriage to his wife Samantha – from how they met as youngsters to how Theresa May walked in on her having a final dance in the Downing Street kitchen.

The couple first met when the young Samantha Sheffield was just 17 and grew close on a family holiday organised by Mr Cameron’s father.

Mr Cameron credits his wife, whom he married in 1996, with turning ‘a pretty traditional Home Counties Tory boy’ into ‘someone a bit more rounded’, the latest extracts published in The Times reveal.

However, he revealed the couple had frequently argued about how his career would affect their private lives. 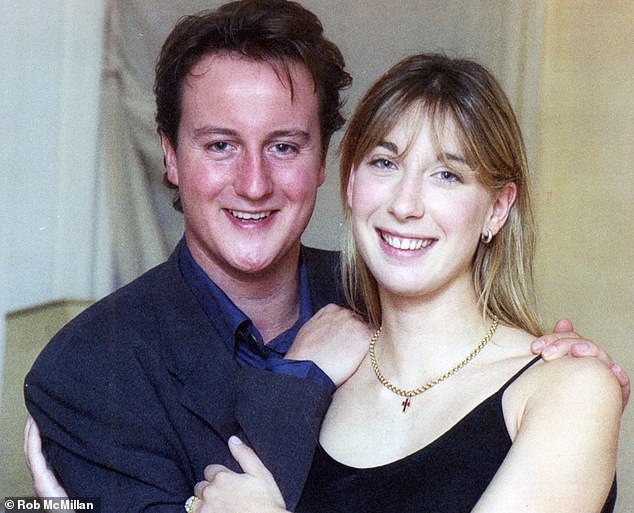 Former Prime Minister David Cameron’s memoirs have revealed intimate details of his marriage to his wife Samantha (they are pictured in 1995, the year before they married)

Mr Cameron’s book describes how the young Samantha Sheffield was initially a friend of his sister Clare.

He recalled being ‘struck’ by Samantha smoking on a sofa and laughing as his sister teased him.

Clare Cameron invited Samantha on a family holiday to Italy but warned her that ‘I think my brother fancies you’.

‘I did. And it was a blissful week,’ Mr Cameron recalls.

At the time she was a 21-year-old art student in Bristol while he was a 25-year-old working as an adviser for the then Tory chancellor Norman Lamont.

He said Samantha would grow irritated when Mr Lamont would call up about that day’s papers – suggesting he ‘f*** off and buy them himself’.

Describing how his friends doubted their relationship, he said: ‘I was the ambitious Tory apparatchik. She was the hippie-like art student.’

‘My friends would say she helped to turn a pretty traditional Home Counties Tory boy into someone a bit more rounded, more questioning and more open-minded,’ Mr Cameron writes.

‘But many of the arguments we had about politics were actually about logistics, rather than issues. Samantha worried hugely about how it would affect our life. Where would we live? How would we stay together? How much would we see of each other?’

Moving ahead to their final days in Downing Street, Mr Cameron recalls how he had to call his daughter back from a school trip when his departure was brought forward. 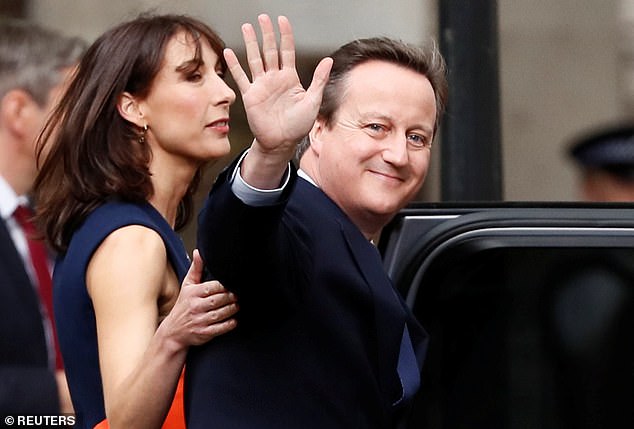 Mr Cameron quit in the hours after the EU referendum result but initially intended to stay on for a few months while the Tory leadership campaign took place.

However, the leadership election collapsed in on itself after every candidate except Theresa May withdrew or was knocked out.

That meant Mr Cameron’s resignation was hurried forward – though his daughter Nancy asked if the Queen could be persuaded to amend her schedule.

Mr Cameron said it ‘didn’t feel right’ for him to go back to Downing Street and help pack away after he left office, meaning that Samantha was left to clear up on her own.

At one point she put on some music and had a ‘final dance around the kitchen’ – at which point the new occupants, Theresa and Philip May, walked in.

In the latest extracts Mr Cameron also admits that both he and Samantha started smoking cigarettes again in the stress of the referendum result.

The ex-PM has already confessed that he got ‘off his head’ on dope while at Eton, and said he smoked it later with his wife and her friends.

Mr Cameron has consistently refused to answer questions about whether he ever took cocaine as a young man.

During the 2005 Tory leadership election, other candidates publicly stated that they had never used Class A drugs.

But Mr Cameron declined to give a similar statement, saying: ‘I did lots of things before I came into politics which I shouldn’t have done. We all did.’

Earlier this year, the issue of drug use erupted in the latest Tory leadership race when it emerged that Michael Gove had taken cocaine on ‘several social occasions’ 20 years ago. The revelation weakened Mr Gove’s campaign for the leadership.