The former Brexit secretary made his first speech since resigning from the Government over its white paper detailing its desired EU withdrawal plan, as ministers struggled to keep tensions in check.

Mr Davis urged MPs to back the Taxation (Cross Border Trade) Bill, also known as the customs bill, and the Trade Bill before arguing how business can operate post-Brexit.

He bemoaned the EU for being a “slow and not very effective” negotiator of free trade agreements, as he claimed the UK has distinct advantages “over and above our economic weight” – including the English language, law and the internet. 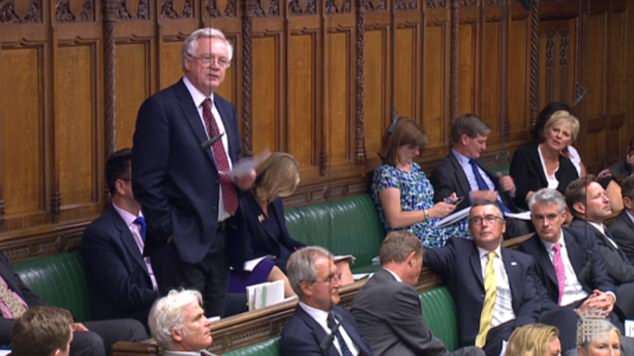 Former Brexit Secretary David Davis made his first intervention since his sensational resignation tonight, speaking up for the rebel amendments Mrs May has been forced to adopt.

Mr Davis’s remarks came after an emotive speech from Tory former minister Anna Soubry, as she urged Tory colleagues to have a “reality check” on Brexit and how the party is conducting itself.

She also said a group of 40 “hard, no deal Brexiteers” should be “seen off” by the Government.

The stormy scenes in the Commons emerged after the Government said it would accept four amendments to the Bill, which allows the UK to establish a new customs regime and ensure VAT and excise laws operate as required upon Brexit, tabled by Eurosceptic Conservative backbenchers.

Ms Soubry was among those who said she could not support new clause 36 – which prevents the UK collecting tariffs on behalf of the EU unless the EU agrees to collect them from the UK – and amendment 73, which stops the UK from joining the EU’s VAT regime. 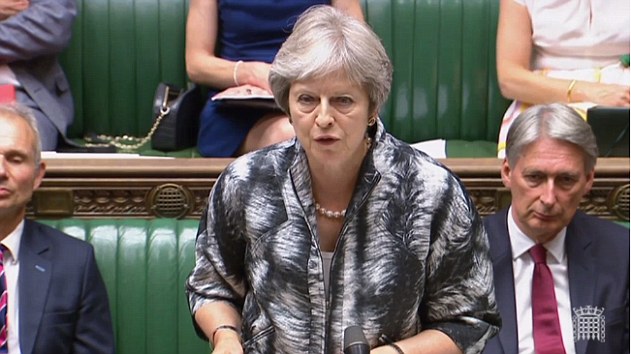 Tory former attorney general Dominic Grieve labelled the two amendments as “unnecessary” and “useless”, adding the only reason behind their tabling was “malevolent”.

Surrounded by Brexiteers, Mr Davis also said: “There may be 300 border crossings, but there are only six ports. So rest of world imports can actually be surveilled and controlled very straightforwardly.

“So the issue which has got much more difficult since becoming politicised, it was actually working quite well in negotiations before it became politicised is eminently soluble, soluble by technical means, soluble by co-operation between the two states.”

Mr Davis told MPs that what the UK would have to give up to join a customs arrangement with the EU “is much more than is imagined”.

He said: “The European Union is a slow and not very effective negotiator of free trade agreements, we keep hearing about their negotiating power, their size.

“Actually the fact that they represent 28 different countries means they come up with sub-optimal outcomes all the time and actually we’re the country that does least well out of the EU free trade agreements.”

He went on to tell MPs that the UK had distinct advantages “over and above our economic weight”, he said: “We have the English language, we have English law, we’re leaders in life sciences, artificial intelligence, Internet, medicine, a whole series of areas.”

Ms Soubry was earlier told by Tory former minister Sir Edward Leigh she “ain’t no Margaret Thatcher” after she praised the former prime minister for her support of free trade.

Ms Soubry later said: “This Government is in grave danger of not just losing the plot but losing a considerable amount of support from the people of this country unless we get Brexit right.”

Ms Soubry went on: “Members on the frontbench and across this place should be shaking their heads with shame – this is the stuff of complete madness.

“And the only reason that the Government has accepted these amendments is because it is frightened of somewhere in the region of 40 Members of Parliament – the hard, no deal Brexiteers, who should have been seen off a long time ago and should be seen off.

“These are people who do not want a responsible Brexit, they want their version of Brexit – they don’t even represent the people who actually voted Leave.

“The consequences of this are grave, not just for our country but also for this party.”

Tory former chancellor Ken Clarke, on the Government accepting Brexiteer amendments, said: “If one week after the Government has set out a policy which I’m prepared personally to give a fair wind to, I find that they are going to accept amendments like new clause 73 and new clause 36 which promptly change the policy in a quite ridiculous way I shall despair.”