Solai, Kenya: The death toll from a commercial flower farm dam that collapsed in Kenya's Rift Valley late on Wednesday, local time, has risen to at least 47.

The dam burst after weeks of torrential rain, unleashing a "sea of water" that careered down a hillside and smashed into two villages. 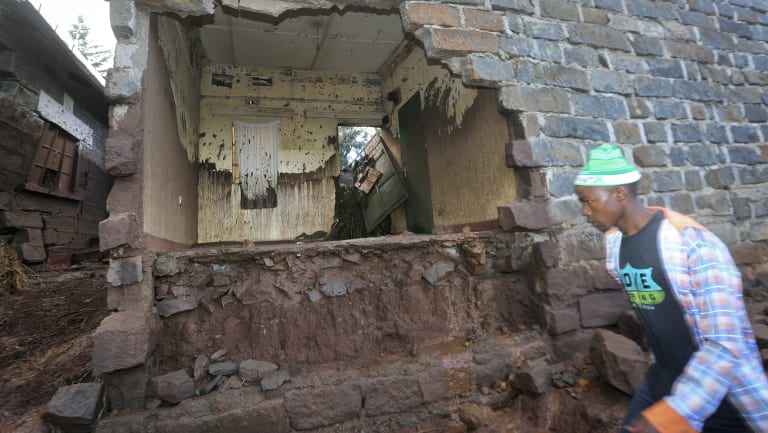 A man walks past a house damaged by the dam flooding, near Solai, in Kenya’s Rift Valley.

The walls of the reservoir, on top of a hill in Nakuru county, 190 kilometres north-west of Nairobi, gave way late on Wednesday as nearby residents were sitting down to evening meals.

Kenya is one of the largest suppliers of cut flowers to Europe, and roses from the 1400-hectare Solai farm are exported to the Netherlands and Germany, according to Optimal Connection, its Netherlands-based handling agent. 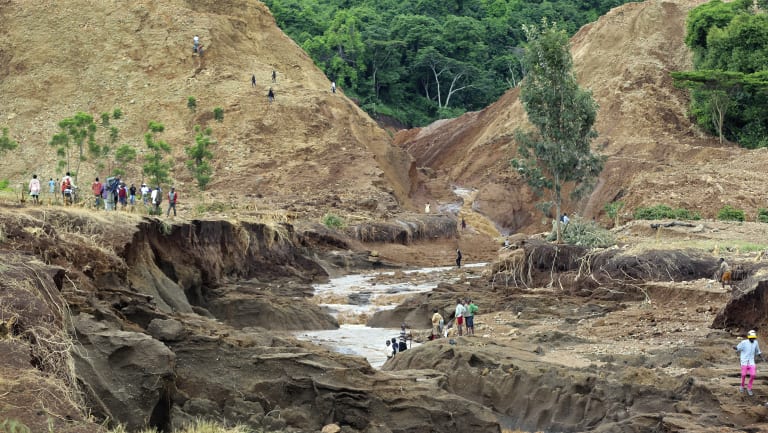 People gather in front of the broken banks of the Patel dam near Solai.

The floodwaters carved out a dark brown chasm in the hillside and swept away everything in their path – powerlines, homes and buildings, including a primary school.

The bodies of two women were found several kilometres away as excavators and rescue workers armed with shovels picked through rubble and mud searching for survivors and victims. The body of a child could be seen in photographs on a destroyed flower field. 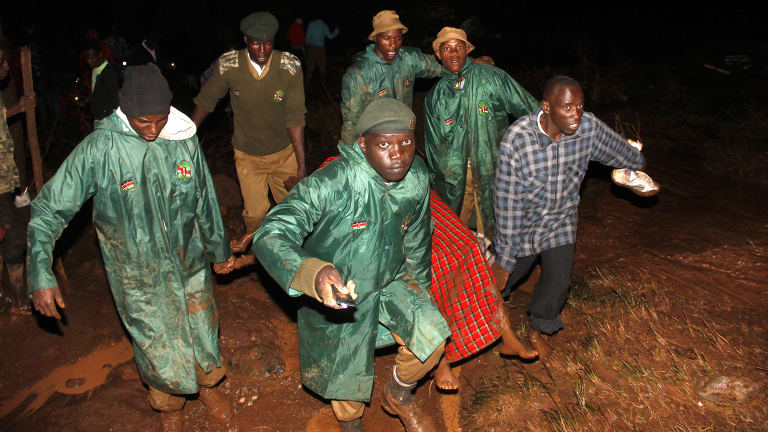 Members of the Kenya’s National Youth Service carry away a dead body covered in a blanket during the early hours of Thursday.

Local Police Chief Japheth Kioko said the death toll could climb. "So far it is 47 dead. We are still on the ground," he said.

Nakuru Governor Lee Kinyanjui said on Twitter that another 40 people were reported missing and a decision had been made to discharge water from another nearby dam as a precaution.

After a severe drought last year, East Africa has been hit by two months of heavy rain, affecting nearly a million people in Kenya, Somalia, Ethiopia and Uganda. Bridges have been swept away and roads turned into rivers of mud.

In Solai, Veronica Wanjiku Ngigi, 67, said she was at home brewing tea with her son at about 8pm when his wife rushed in to say the dam had burst and they needed to get to higher ground immediately.

"It was a sea of water. My neighbour was killed when the water smashed through the wall of his house. He was blind, so he could not run. They found his body in the morning," she said. "My other neighbours also died. All our houses have been ruined."

The governor said 450 homes had been hit by the floodwaters and safety engineers had been sent to inspect three other dams to check for cracks or breaches.

Wanjiku, the survivor, said at least one looked like it was ready to burst. "There is another dam which is also overflowing which is looking risky," she said. "We are scared."

One primary school had been closed as a precaution, education officials said. Arriving at the scene, Interior Minister Fred Matiangi pledged central government assistance to those affected.