A Victorian couple attacked by their pet deer exchanged goodbyes after realising one or both of them would not survive.

The husband suffered fatal puncture wounds from the deer’s antlers in April 2019. He had raised the buck from a fawn. 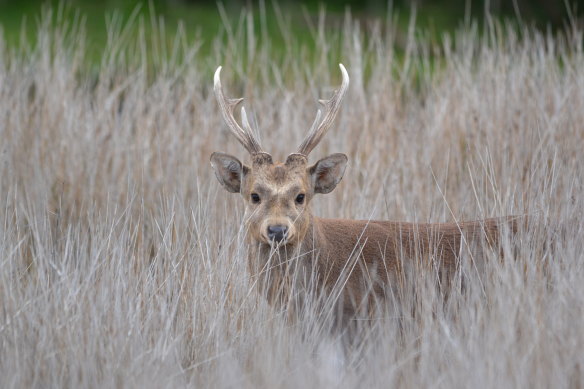 His wife was flown to hospital for treatment and survived.

The deer’s behaviour had changed in the days before the incident and the man, identified as MD in coronial findings, was no longer prepared to go into its enclosure, his wife said.

It is believed he was trying to untangle the deer’s antlers from a fence when he was attacked and pinned to the ground.

His wife and their son ran to his aid, bringing stones, timber and a crossbow to protect themselves.

The son ran to get a gun from the shed but returned when he heard his mother scream. She had tried to put herself between the deer and her husband, and the animal turned on her.

A paramedic who lived next door to the family went to help and fired three shots at the deer, which did not seem to be affected.

He helped the woman from the enclosure before returning for her husband, who died at the scene.

More than 20 people went to Victorian hospital emergency departments with injuries caused by deer between 2010 and 2020, Olle found.

“Even when bred in captivity, deer do not make good pets,” he said.

While they can be tamed, they become increasingly unmanageable as they mature, he said. During mating season, which runs four to five weeks from late March in Australia, male deer exert dominance over each other.

“Domesticated deer may attack humans during mating season and can turn dangerous to protect their young,” he said.