Dubai: Hundreds of thousands of Iranians have marched and some burnt US and Israeli flags to mark the revolution's 40th anniversary, as Tehran showed off ballistic missiles in defiance of US efforts to curb its military power.

Soldiers, students, clerics and black-clad women holding small children thronged streets across Iran, many with portraits of Ayatollah Ruhollah Khomeini, the Shiite cleric who toppled the Shah in an Islamic uprising that still haunts the West. 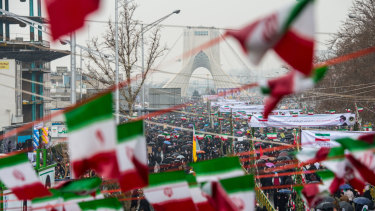 Iranians fill the street leading to the Azadi Tower during celebrations marking the 40th anniversary of the Islamic revolution in Tehran on February 11.Credit:Bloomberg

On February 11, 1979, Iran's army declared its neutrality, paving the way for the fall of US-backed Shah Mohammad Reza Pahlavi. 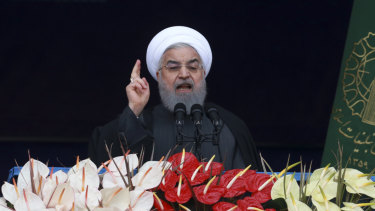 The Islamic Republic has vowed to increase its military strength despite mounting pressure from Western countries to curtail its ballistic missile program.

Those capabilities were on display during the march, including the Qadr F, a ground-to-ground missile with a 1950-kilometre range, the Tasnim news agency said. 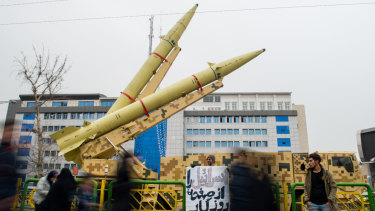 "We have not asked and will not ask for permission to develop different types of … missiles and will continue our path and our military power," President Hassan Rouhani said in a speech at Tehran's Azadi (Freedom) square.

US President Donald Trump tweeted on Monday that the Iranian government had let down its people.

"40 years of corruption. 40 years of repression. 40 years of terror. The regime in Iran has produced only #40YearsofFailure. The long-suffering Iranian people deserve a much brighter future," he posted in both English and Farsi. 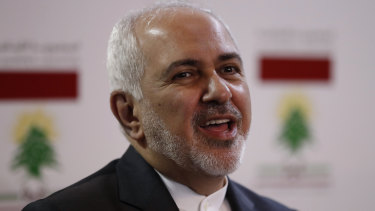 "Our presence in the 40th anniversary of the revolution is to show our support for the Islamic Republic," said one sign held by a protester. "But it does not mean we support corruption of some officials and their betrayal of the oppressed people."

Reuters could not independently verify the pictures. 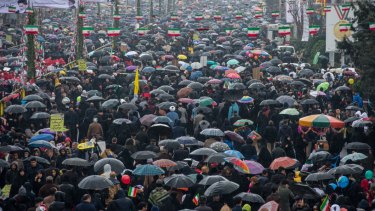 Iranians braved the rain to join in the march on Monday.Credit:Bloomberg

Last year, Iran cracked down on protests over poor living standards that posed the most serious challenge to its clerical elite since a 2009 uprising over disputed elections.

Prices of basic foodstuffs have soared since Trump withdrew Washington from the world powers' 2015 nuclear deal with Iran last year and reimposed sanctions on Tehran.

In January, Rouhani said Iran was dealing with its worst economic crisis since the Shah was toppled.

But he remained defiant on Monday as Iranians recalled the end of a monarch who catered to the rich.

"The Iranian people have and will have some economic difficulties but we will overcome the problems by helping each other," he said.

But if they attack us, we will raze Tel Aviv and Haifa to the ground.

"The United States does not have the courage to fire a single bullet at us despite all its defensive and military assets. But if they attack us, we will raze Tel Aviv and Haifa to the ground," Javani told the state news agency IRNA.

Israeli Prime Minister Benjamin Netanyahu dismissed the threat. "I am not ignoring the threats of the Iranian regime, but nor I am impressed by them," he said. 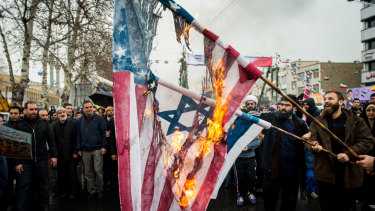 Iranians burn U.S. and Israeli national flags during celebrations marking the 40th anniversary of the Islamic revolution in Tehran.Credit:Bloomberg

"Were this regime to make the terrible mistake of trying to destroy Tel Aviv and Haifa, it would not succeed, but it would mean that they had celebrated their last Revolution Day. They would do well to take that into account." 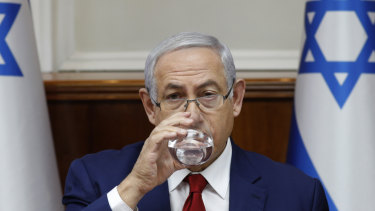 Washington and the Arab world have viewed Iran with great suspicion since the Islamic Revolution, fearing Khomeini's radical ideology would inspire militants across the Middle East.

Today, the United States, its Arab allies and Israel are trying to counter Tehran's growing influence in the Middle East, where it has proxies in Syria, Lebanon and Yemen.

Netanyahu has said Israel would ramp up its fight against Iranian-aligned forces in Syria following the withdrawal of US troops.

On Monday, local time, an Israeli drone fired four missiles near a demolished hospital and an army observation post in Syria's southern Quneitra province near the border with Israel. There had been only material damage, the Syrian army said.

The area is a bastion of Iranian-backed militias led by Lebanon's Hezbollah group.

Israel has mounted several attacks in Syria as part of its effort to counter the influence carved out there by Iran, which has supported Syrian President Bashar al-Assad in the war that erupted in 2011.

Iran also has vast clout in Iraq, where Major-General Qassem Soleimani, head of the overseas arm of the Revolutionary Guards, was frequently photographed guiding Shiite militias in the war against Sunni Islamic State militants.