A delivery driver has been caught red-handed hurling a parcel of baby bottles and dummies on to a first floor balcony in central London.

The driver, subcontracted by a third party, made the strange decision after he rang the doorbell of an Amazon customer who wasn’t home.

The customer, who wishes to remain anonymous, said he had expected his wife to be home as she is currently on maternity leave, but she had an appointment at the time.

He told Mail Online: ‘The package was baby bottles, dummies and other baby bits because I had a child four months ago. So it was probably the least breakable thing ever!

‘But the point is that he (the delivery driver) doesn’t know that.’ 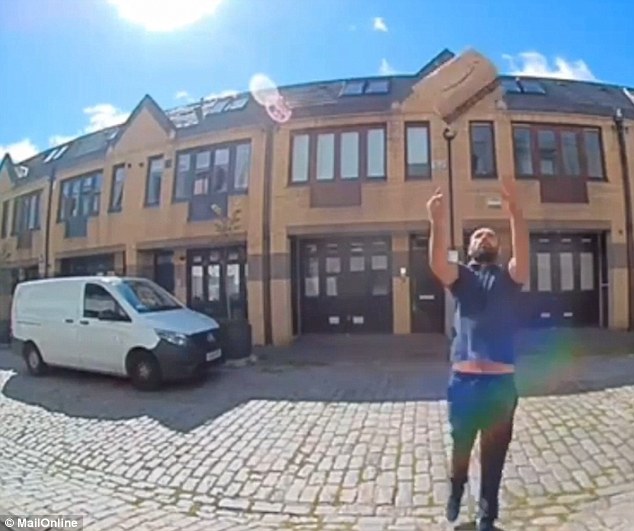 The footage was captured last Friday on a front door camera connected to the customer’s phone. He said he would usually use the Ring app to tell the courier to leave the package in a refuse cupboard by his front door when he’s not home.

He missed the call on this occasion and that’s when the driver chose to hurl the package one story, not thinking he was being recorded.

He told Mail Online: ‘Had the package been heavier it could have caused damage to my property.

‘He threw it like a rugby player, like a spin pass on to my balcony! The fact is that there are glass windows there so it could have been much worse.’

He added: ‘My wife came home confused to find the package there outside.’ 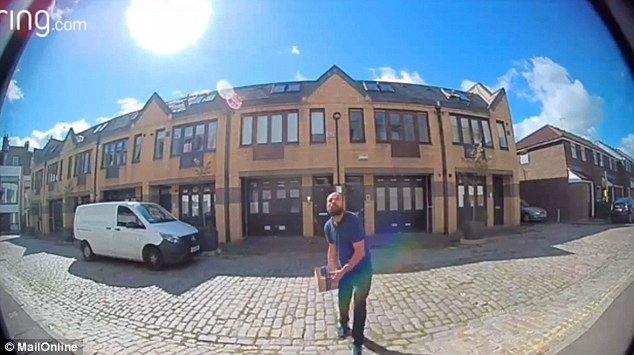 The customer posted on his LinkedIn account saying: ‘#busted Amazon. Apparently lobbing a package onto my 1st floor balcony is an acceptable way to deliver these days …’

His video has garnered several hundred likes and over 50,000 views.

The London-based customer said he was happy with the way Amazon dealt with his issue, offering him £40 compensation.

He added: ‘I’ve dealt with Amazon many times and I’m happy enough. Nothing’s broken so it’s fine but I’m concerned with what is causing this behaviour.

Posting on LinkedIn, people were both unsurprised with the driver’s behaviour and even impressed with his throw. 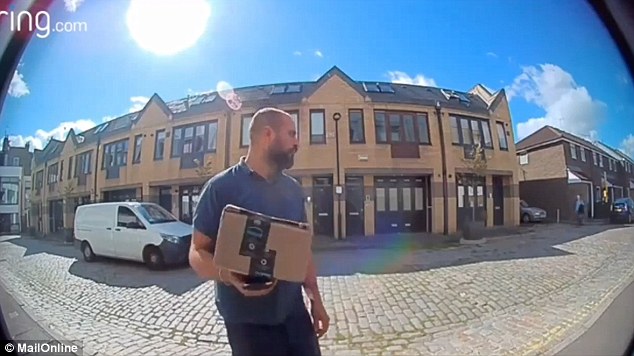 Before throwing, the delivery driver appears to check to see if the coast is clear for a throw 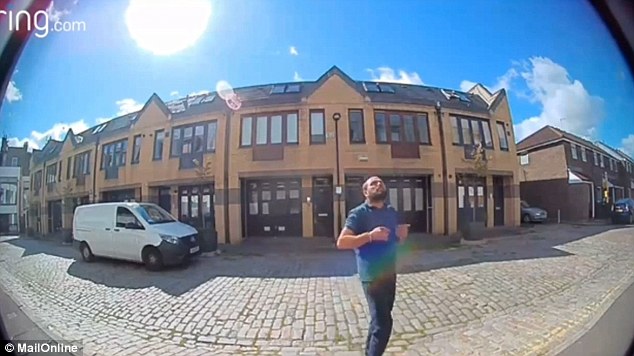 ‘I think problem is how little the delivery co’s pay people and probably per delivery they make, so they rush through as much as poss, not wanting to take time for notes through door or finding a neighbour to accept parcel. ‘

Jake Mattock posted: ‘Irrelevant of what businesses earn or what the delivery driver is paid you shouldn’t be launching people’s stuff about.

‘That said, if it was clothes or something not fragile I’d provably actually appreciate it being there when I got home. Problem solver.’

Byron Warmington said: ‘Hats off to that man for a great throw.’

A spokesman for Amazon said: ‘We have very high standards for our delivery service providers and expect every package to be handled with care.

‘We’ve notified the right teams internally and have worked with the customer directly on matters related to their package delivery.’