A man who strangled his girlfriend and left her body in a Chinatown alleyway has been jailed for 21 years for her murder after the trial judge took into account delusions caused by his untreated schizophrenia.

The legislated standard sentence for murder is fixed at 25 years but in the Supreme Court on Friday, Justice Lex Lasry found that Christopher Allen Bell's moral culpability was reduced because of the delusions, despite the killer having a long history of domestic and family violence and a string of assault charges to his name. 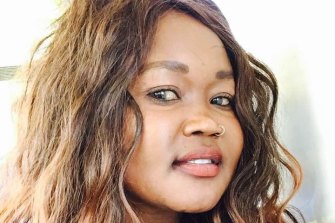 Bell, who pleaded guilty to murdering his girlfriend Natalina Angok in a CBD laneway last April – a week after checking himself out of a psychiatric hospital – will be eligible to apply for parole in 18 years.

The 33-year-old murderer, who appeared in court via videolink, has already served 535 days of pre-sentence detention, so could be released not long after he turns 50.

Bell had previously told the court he was “remorseful” despite not calling for help, buying cigarettes, going to the casino and eating a souvlaki in the hours after killing Ms Angok.

“Having killed her for reasons you yourself do not comprehend, you abandoned her, and left her alone and dead in an alleyway,” Justice Lasry said. 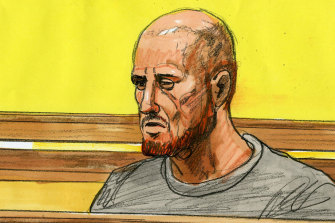 Christopher Bell in court at an earlier hearing.Credit:Nine News

“Like so many similar cases this case was a tragedy. So many men feel the need to inflict violence on women, sometimes fatally, as in this case. Although in this case, the need was in part based on the delusions which arose from your schizophrenia.

“Natalina Angok’s death was futile, except to the extent that it may once more draw the community’s attention to the often fatal outcomes of male violence against women, for whatever reason it occurs.”

The crouched body of Ms Angok, 32, an aspiring dental nurse, was found by a passerby in Celestial Avenue, near Little Bourke Street, with her handbag and cracked phone beside her just after 6.30am on April 24, 2019.

Justice Lasry said that DNA belonging to Bell was found under Ms Angok’s fingernails. Detectives went to the Space Hotel where Bell was living at the time and noted a scratch to his neck. 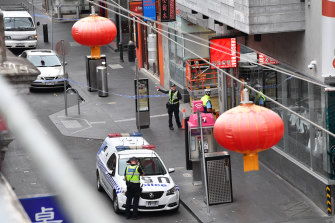 Police at the scene of the killing off Little Bourke Street.Credit:Joe Armao

The pair had been in a relationship for about a year, according to her family. She had a warehouse packing job and was one of five siblings.

Bell and Ms Angok were captured on CCTV at the Exford Hotel on Russell Street, where they went into the venue's bottle shop about 2am on April 24.

On the Friday after Ms Angok's death, more than 50 people attended a vigil on the steps of Parliament House in the CBD.

Justice Lasry leant heavily on the psychological analysis provided by Associate Professor Andrew Carroll, who said it was likely that Bell’s untreated schizophrenia, turbulent relationship dynamics with Ms Angok and inhibition caused by drug and alcohol use on the night contributed to the murder.

“On balance, although multiple factors were most likely at play, I consider it more likely than not that the symptoms of his untreated schizophrenia made a significant causal contribution to the offending,” Dr Carroll said.

“It is certainly possible that his delusions regarding the victim were a necessary causal factor in the killing, but I cannot be definitive on that point.

“I note that in particular, [he has] a long history of violence towards women that predates the onset of his schizophrenia.”