Cleveland Browns quarterback Deshaun Watson, now released from his 11-game suspension for violating the NFL's personal conduct policy, spoke to the media on Wednesday for the first time in four months. He refused to answer any questions about his current legal proceedings with several women who are suing him for sexual misconduct, or about any of the 20-plus other women who have accused him of sexual misconduct.

Watson, who will make his first NFL start in two years on Sunday, opened the session by giving a personal statement. He thanked backup quarterback Jacoby Brissett, his teammates, trainers, and fans.

Deshaun Watson’s opening statement. Thanks Jacoby Brissett. Thanks browns and trainers and fans. Also says he is only answering Football questions for legal reasons. pic.twitter.com/rHemk0eD8I

Watson: Excited to be back. Have to thank the Browns and my teammates for welcoming me back and also my trainers for helping get me ready.

“Also the city of Cleveland fans for embracing me.”

Watson had to emphasize that he would only answer football questions more than once. He was asked about therapy and counseling, and about whether he should be the face of an NFL franchise. He declined to answer both.

Watson starts by choosing not to answer a question about how his counseling and therapy went.

First question to Deshaun Watson was about his treatment:

"I've been advised to stay away from that and keep it personal."

"There are only football questions that I can address at this time."

Reporter: "What do you say to fans who say you shouldn't be the face of an NFL franchise?"

Watson: "Like I said, I'm going to focus in on football."

Watson also wouldn't answer a question about his mental state during the suspension, but did discuss his general outlook on life.

Deshaun Watson speaking for the first time since Aug, was advised to only answer questions about football per his legal team. This is the closest answer we got pertaining to anything off the field. Watson was asked about the 11 game suspension and his mindset during it. pic.twitter.com/azxhwuvq5l

The football questions were mostly focused on Watson coming back to play his first game in two years (against his former team the Houston Texans, no less) and how he's been shaking off the rust and preparing.

Watson on rust from layoff.#Brownspic.twitter.com/nrsUPPTxs2

“My biggest focus was the mental part. Staying locked in on defensive schemes and staying locked in on the scheme we have here. Just following Jacoby, asking him questions … preparing like I was the starter that week.” https://t.co/0ywikzCGwL

Watson: “Always appreciative. Always thankful. I grew up with pretty much nothing.”

How close do you feel to being the player we saw?

“We have to see Sunday. Two years is a long time but I’ve been doing this since I was six years old.”

He also gave a lot of love to Brisset for his good quarterbacking over the first 11 games of the season.

What can you add to the offense?

Watson: Really just trying to make as many plays as I can. Jacoby had this offense in the top five in pretty much every category. I gotta hold up to that standard.

Watson said he's been liking the Browns' QB-driven system, and has been learning more every day.

Watson said the Browns have “a QB driven system and definitely have guys around the QB who can make plays.”

“Great system to be in. Happy to be in it. Continue to learn and grow every day.”

Watson emphasized that communicating with those big playmakers is important, and it's something that Brissett was very good at. He's also really looking forward to playing with running back Nick Chubb.

“When I first got back my thing was hearing Jacoby talk to those receivers. We watch tape. I’m able to stand up in the meeting … let’s be able to have that communication and talk.” https://t.co/iATvTZY17r

Watson and the Browns will take on the Texans at 1:00pm ET on Sunday. 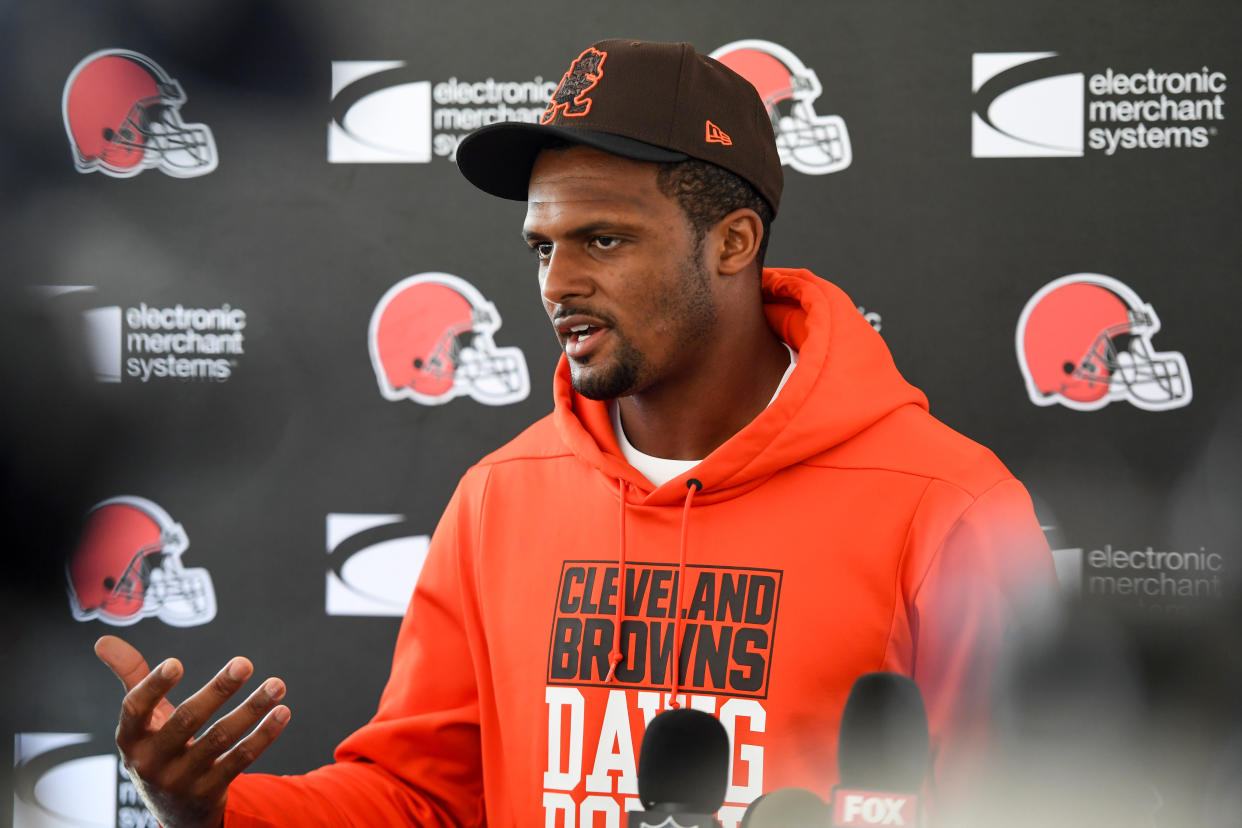