Jakarta: Indonesian rescue workers are scrambling to reach an estimated 60 people trapped by landslides that caused an illegal gold mine in North Sulawesi to collapse.

One body has already been pulled out from the rubble, 13 people have been rescued with a range of injuries and authorities believe at least some of the 60 people buried in the landslide are still alive in Bakan village, Lolayan. 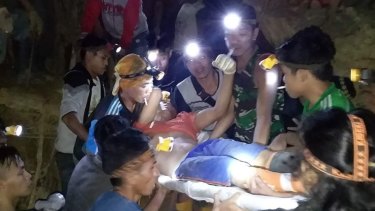 Indonesia’s national disaster mitigation agency the BNPB scrambles to save those still trapped after an illegal gold mine collapsed.Credit:BNPB

The incident took place at about 9pm local time (1am AEDT) on Tuesday.

Sutopo Purwo Nugroho, the spokesman for Indonesia's national disaster mitigation agency BNPB, said dozens of people had been mining for gold on the site, when "suddenly the poles and supporting boards were broken due to the unstable condition of the soil and the large number of mining holes".

It is not clear whether there were other contributing factors to the landslide.

"It is estimated that as many as 60 people are buried under landslide and rock material at the location of the people's mining area," he said.

"It is estimated that there are still dozens of victims trapped in the rubble of mine excavation holes." 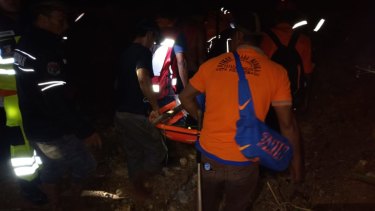 Sutopo said the rescue teams worked through the night because of the large number of victims buried and the fact that authorities believe the workers are still "aman", an Indonesian word that means safe but that can also be understood to mean alive in this context.

A number of groups and agencies including rescue agency Basarnas, the Indonesian army, police and local miners are involved in the rescue efforts.

Illegal gold mining is common in Indonesia and it is also not uncommon for these mines, which are often poorly constructed, to collapse.