Disabled mother living on the 15th floor of Grenfell Tower had only used the stairs once before she was forced to flee down them on the night of the fire, inquiry hears

A mother with mobility problems who lived on the 15th floor of Grenfell Tower had used the stairs just once prior to fleeing down them on the night of the fire, an inquiry heard.

Rashida Ali, who had a heart operation four months before the fire, had been helped up the stairs when the lifts were broken, shortly after she moved in in 2014, and since then had always used the lifts.

Before the fire on June 14 last year, the 55-year-old had ‘chronic multiple health conditions’, including heart problems and shortness of breath, and she used a walking aid. 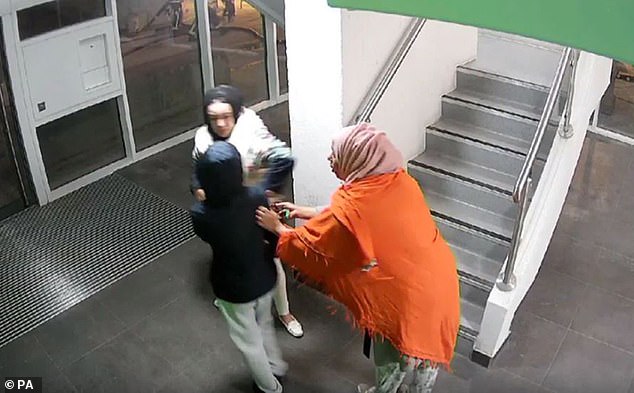 Rashida Ali (in the orange) has only used the lifts because of mobility problems, but was forced to use the stairs on the night of the tragedy

Kensington and Chelsea Council (RBKC) were aware she had problems with her mobility, she told the public inquiry into the fire.

On the night of the fire she fled with her daughter, then 10, after smelling burning and noticing smoke at the bottom of the high-rise when she looked out of the window.

She said her husband, Sid Ali Atmani, was sick in bed and refused to go with them, believing the fire was ‘no big deal’.

When she got to the bottom of the tower she handed her daughter to a neighbour and returned to try to get her husband.

But Mrs Ali was stopped by a firefighter, who refused to let her past the second floor and promised to get Mr Atmani out when she handed him her flat keys.

After about half an hour, she saw her husband exit the tower, disorientated, barefoot and covered in soot. 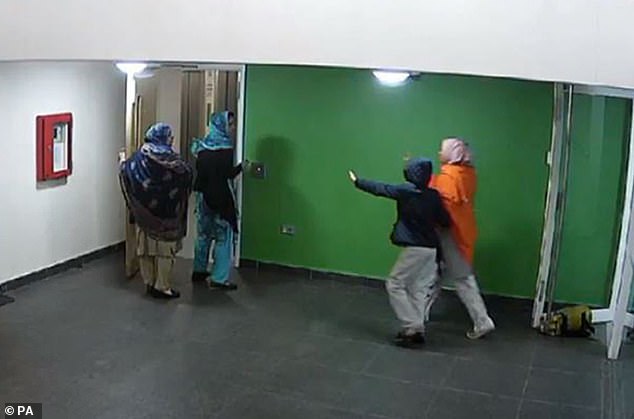 When Mrs Ali got to the bottom of the tower she handed her daughter to a neighbour and returned to try to get her husband, the inquiry heard 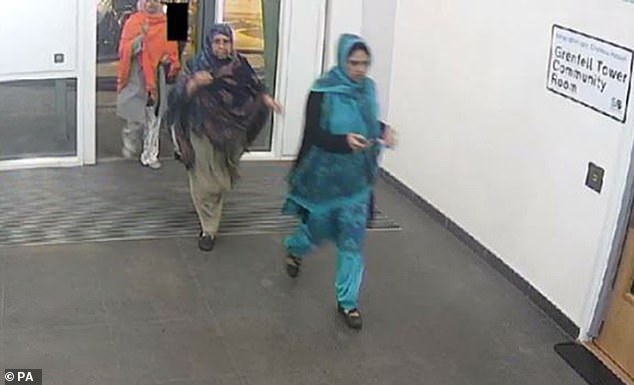 Kensington and Chelsea Council (RBKC) were aware Mrs Ali had problems with her mobility, she told the inquiry. Pictured: The women run into the downstairs floor community room

In her written statement Mrs Ali said: ‘He was not talking or responding. He was in shock.

‘I had a whole mixture of emotions when I saw him; I was angry with him for staying and putting us through such pain and worry, and I was obviously relieved that he has survived.

‘I started to shake him, speak to him, then I couldn’t stop crying.’

Mrs Ali, who is originally from Somalia, first came to London into 1996, and had lived in Liverpool since 2010.

She returned to north Kensington to live in Grenfell Tower in 2014 because she needed to be close to family who could support her after her heart operation.

Mrs Ali, who described herself as the ‘keeper’ for her family, said she lost a lifetime of treasured mementos as well as friends. 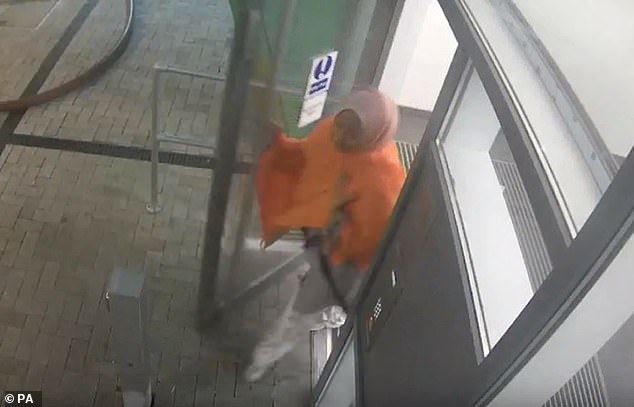 Mrs Ali, who is seen running of Grenfell Tower to safety, said she had friends in the fire as well as a lifetime of treasured mementos

She said: ‘People dear to me have died. I have survived but have lost everything.

‘My possessions have been destroyed – wedding jewellery, clothes and things that I had collected over the years which would remind me of a time, place or person.

‘I had separate photo albums for each of my children, where I collected photos from when they were babies.

‘I also had family photo albums from my mum and my dad, all the history of the family.

‘I used to gather all the pictures from them and said I would look after them, I was the ‘keeper’ and now I have lost them all.’

A total of 72 people perished as a result of the tower block blaze.

The public inquiry is in its first phase at Holborn Bars in central London, and is hearing evidence from survivors of the fire and those who lost loved ones.