Pink sand beaches, crystal clear waters and year-round warm weather have long drawn the rich and famous to the tiny island of Bermuda.

The chilled-out vibe offers the perfect weekend break for stressed-out Americans and a luxury getaway for travelers from the UK, while the waters filled with coral and shipwrecks provide thrill-seekers with something extra.

Keen to get away from stifling heat and hustle and bustle of New York for a few nights, I visited for the first time in July. 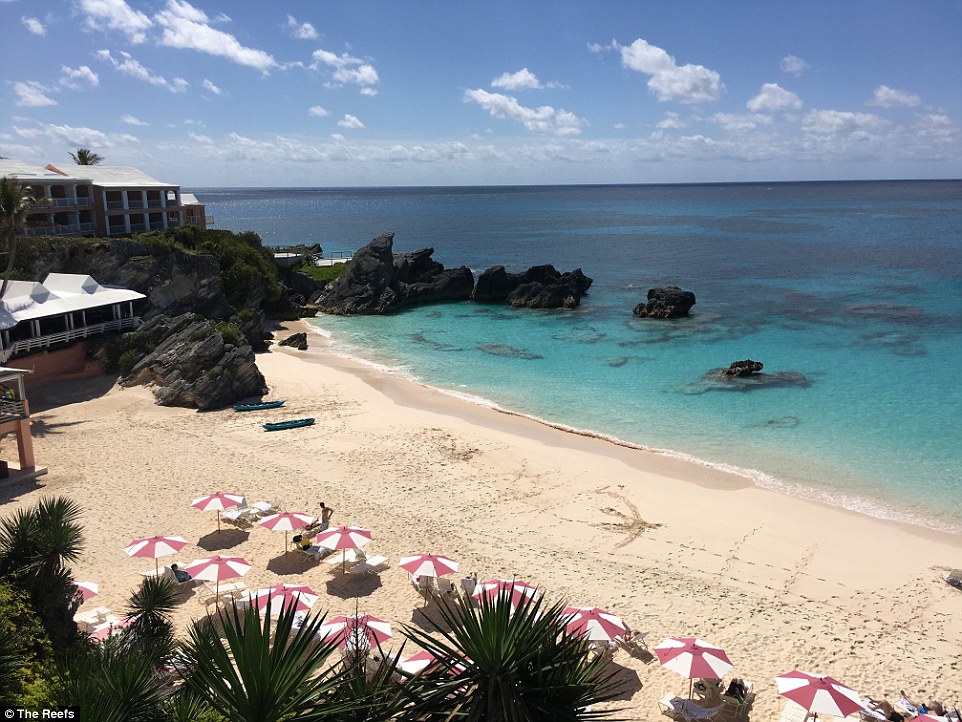 Paradise: One of the best features of The Reefs is undoubtedly its private pink sand beach just a few steps from the rooms 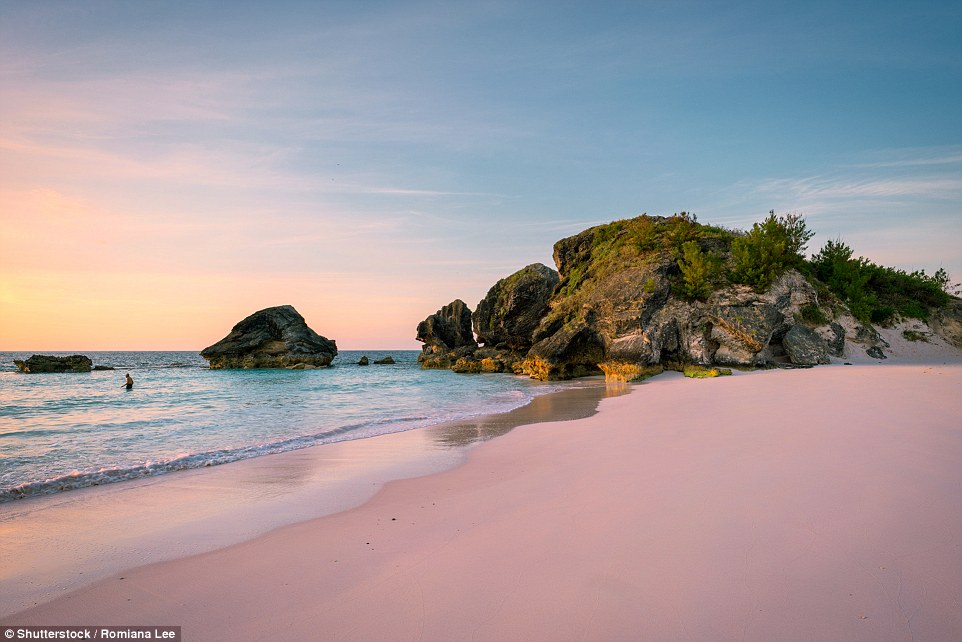 Pink sand: A selfie-lover’s paradise, Horseshoe Bay Beach has been ranked as one of the best in the world

Just over two hours away and with reasonably inexpensive flights, Bermuda is fast becoming the perfect alternative to The Hamptons for New Yorkers seeking a short break in paradise.

I stayed at The Reefs, a stunning family-owned boutique retreat with its own private beach on the celebrated South Shore.

The beachfront location with views across the Atlantic is without a doubt the resort’s best selling point. Just a few steps from your room, you’re greeted by the island’s famous pink sand, coral reefs and warm water.

A dedicated team on the beach means you’re never without clean towels and, of course, one of the island’s signature cocktails – the rum swizzle.

Those keen to be active can take out a kayak for the day, or like I did, a mask and snorkel. 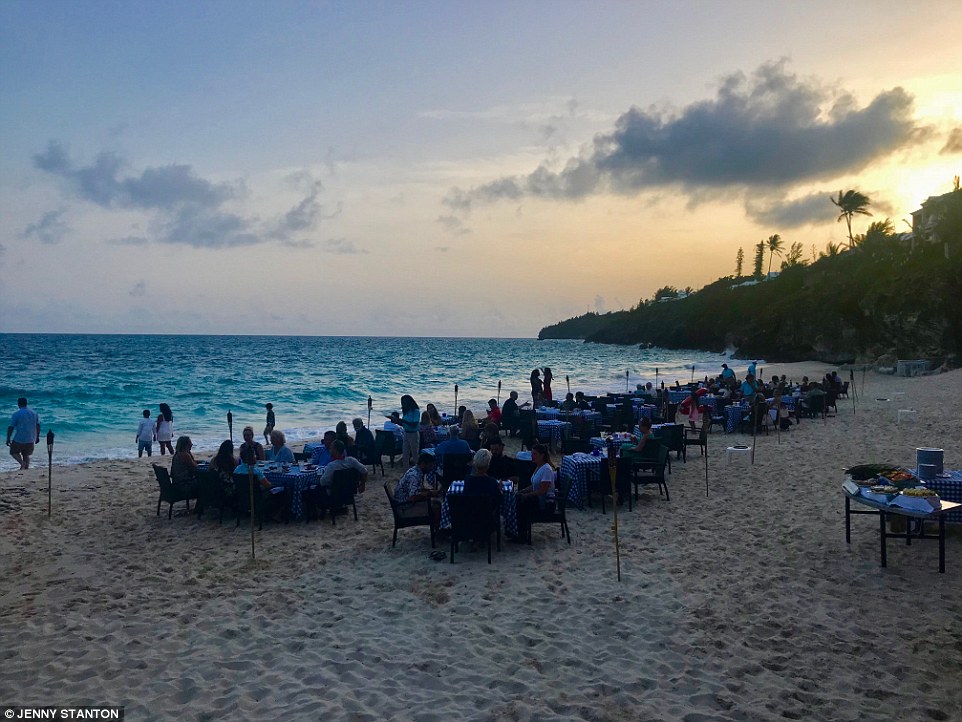 Al fresco: The Reefs has four bars and restaurants, but eating dinner on the beach was the best dining experience 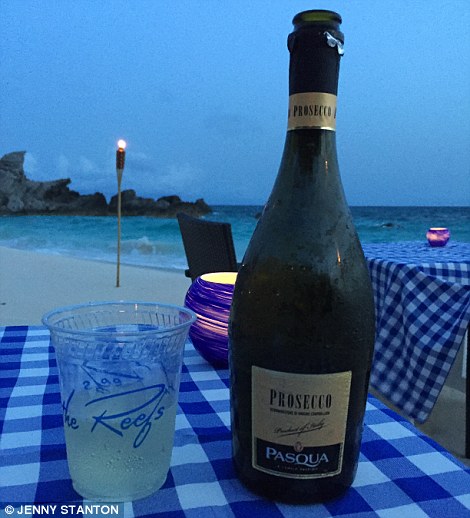 Unique: I ate (and drank) as the sun set over the cliffs and the tide came in

Although the convenience of a private beach is appealing, I was keen to seek out other spots around the island.

Because of the size of Bermuda, you are never more than a mile from the ocean.

A short walk away from the hotel is the famous Horseshoe Bay Beach.

A selfie-lover’s paradise, it has been ranked as one of the best beaches in the world, although it can become crowded when cruise ships dock a few miles away.

I was keen to find somewhere a little more secluded and asked the Bermudian bar staff where they would go on their days off. The consensus was Admiralty House Park in northern Bermuda.

Buses cost just a few dollars – both US and Bermudan dollars are accepted on the island – and are the best  way to explore without splashing out on taxis.

Admiralty House Park, which was once home for British Royal Navy admirals, was wonderfully deserted, bar a few locals.

It boasts a completely isolated beach called Deep Bay, which you can only enter through an unmarked hole in a wall. If you’re a confident swimmer, you can make your way round to nearby caves. 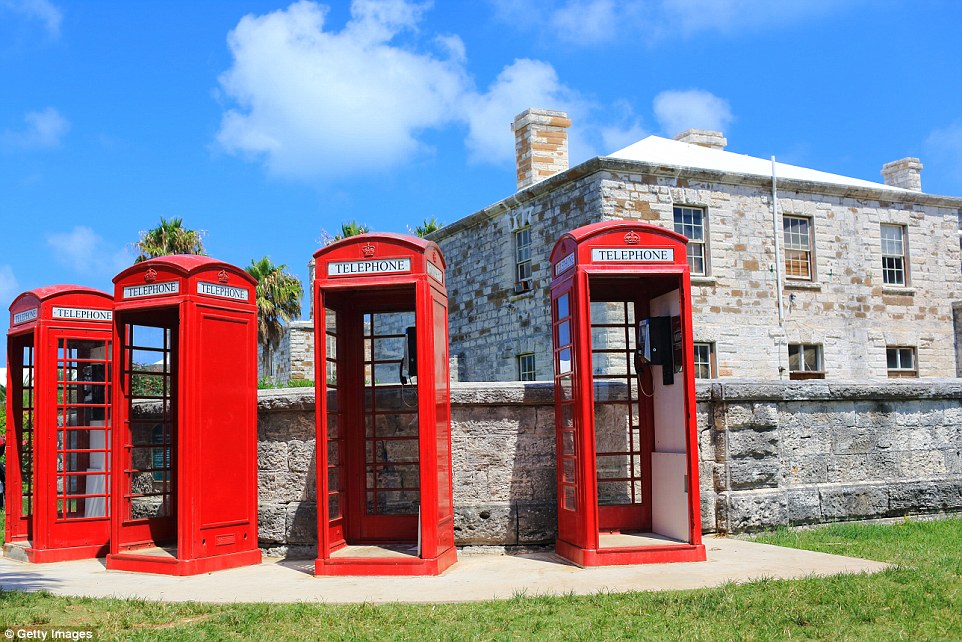 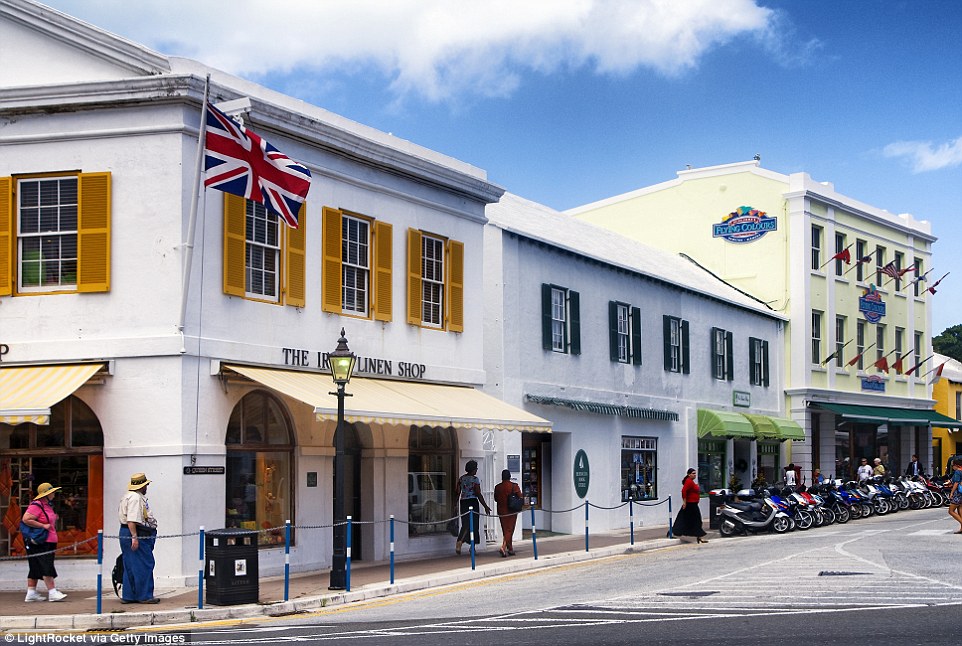 British charm: The streets of Hamilton wouldn’t look out of place in any old English town

WHY IS THE SAND PINK?

The pink beaches are a combination of crushed coral, calcium carbonate and the red shells of tiny single-celled animals called foraminifera.

Hopping back onto the bus, the capital Hamilton is just a few minutes away.

For me – a Brit who has been living in the US for more than two years – one of the biggest draws to this 21 square mile island in the Atlantic is the British charm, and Hamilton has it in abundance.

Bermuda is a British overseas territory, discovered in 1505 by the Spanish, but later colonized and settled by the English in 1612.

Cute cobbled streets and even the familiar green, amber and red traffic lights just two hours from my home in Brooklyn stirred a little nostalgia in me.

The real highlight of my stay, however, was the accommodation. The Reefs boasts four restaurants and bars, an infinity edge pool overlooking the ocean and a spa. 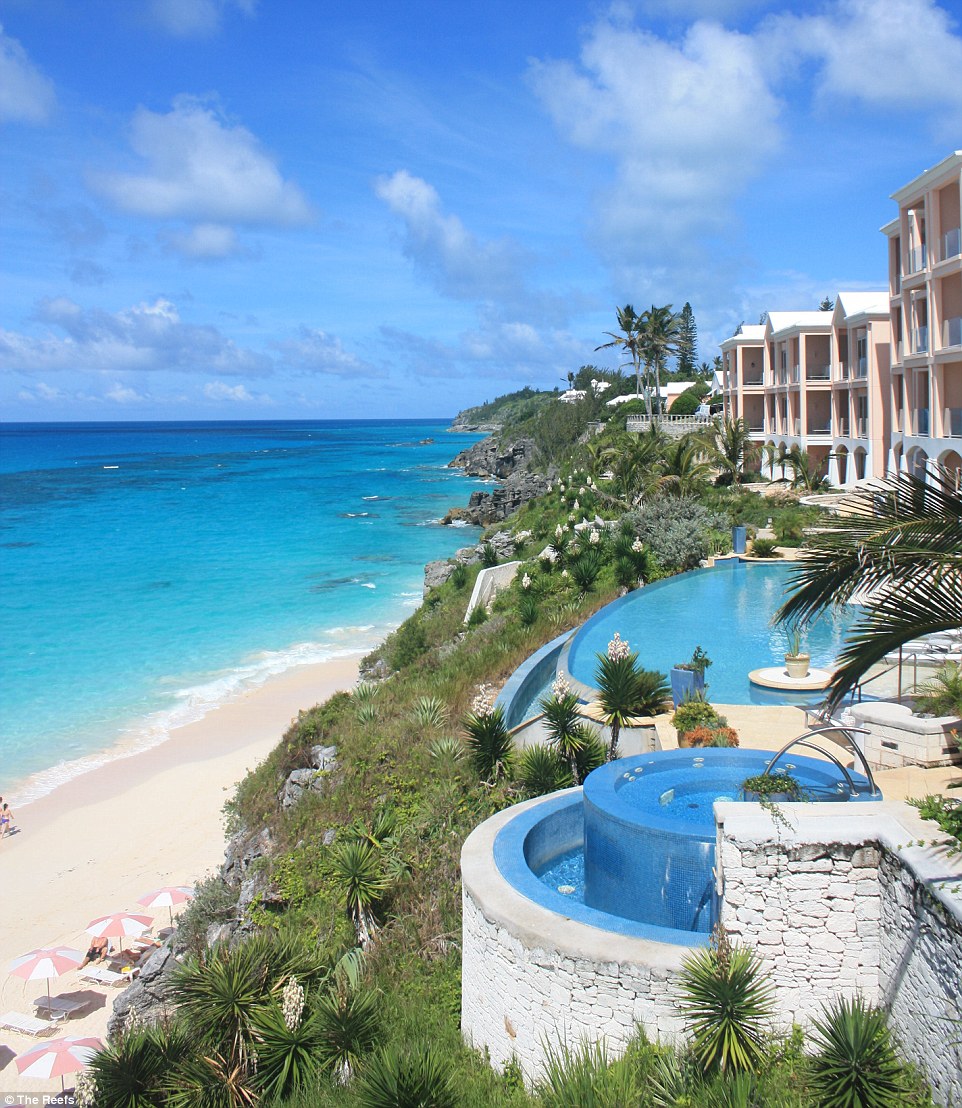 Amenities: As well as it’s own beach, the hotel has an infinity pool overlooking the turquoise ocean 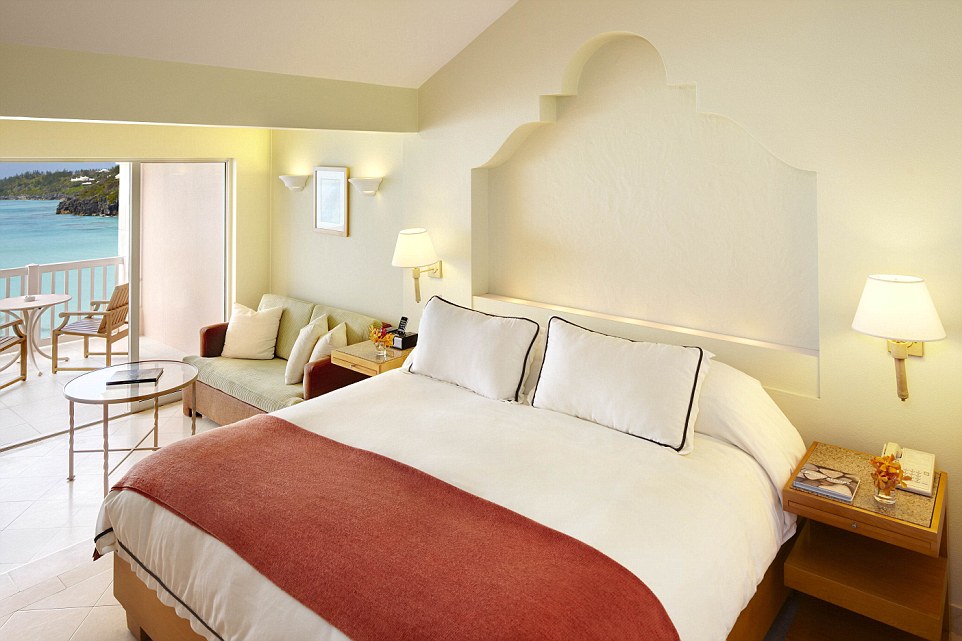 Luxury: I stayed in a junior suite (pictured) with its own balcony, the deepest soaking tub I’ve ever seen and a plush king bed which you can see the ocean from

Coconuts restaurant is located just a few steps from the beach, offering both casual lunches and intimate, romantic dinners with menus filled with mouth-watering fresh seafood.

But it was Thursday’s BBQ on the beach was truly extraordinary.

Coffee rubbed baby back BBQ ribs, slow braised beef brisket, wahoo fish, and mussels were among the delectable dishes cooked up by chefs.

After a long day swimming, I was grateful to be able to go back for seconds and even thirds.

I ate as the sun set over the cliffs and the tide came in, at one point drenching my bare feet. A DJ played the latest tunes and guests danced around the bonfire after a few drinks.

I stayed in a junior suite with its own balcony, the deepest soaking tub I’ve ever seen and a plush king bed which you can see the ocean from. 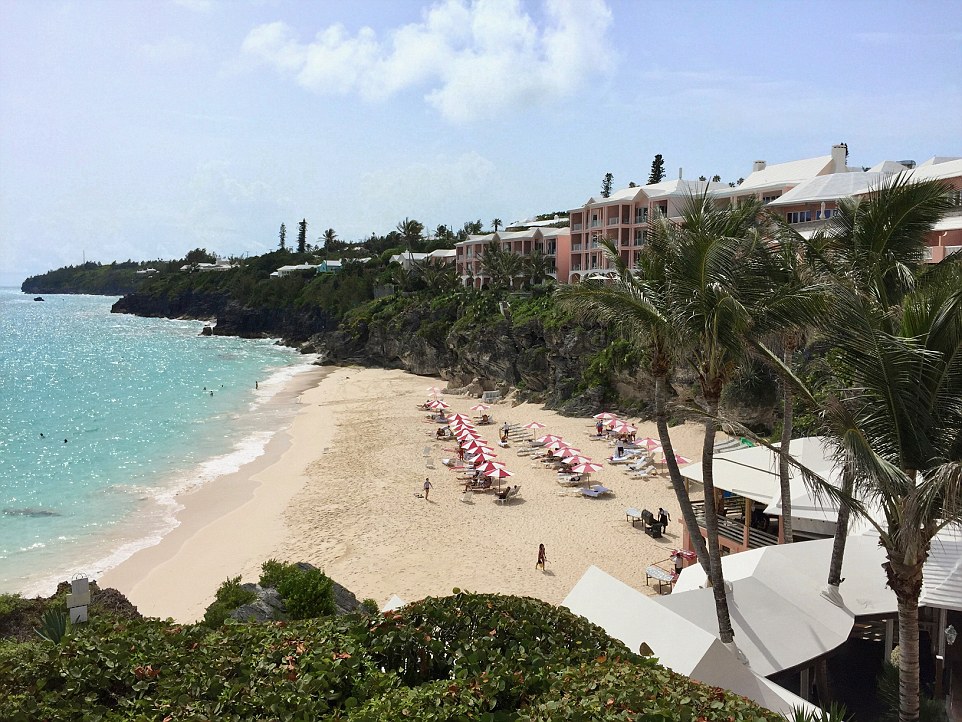 A room with a stunning view: I stayed in a junior suite at The Reefs with its own balcony which overlooks the ocean 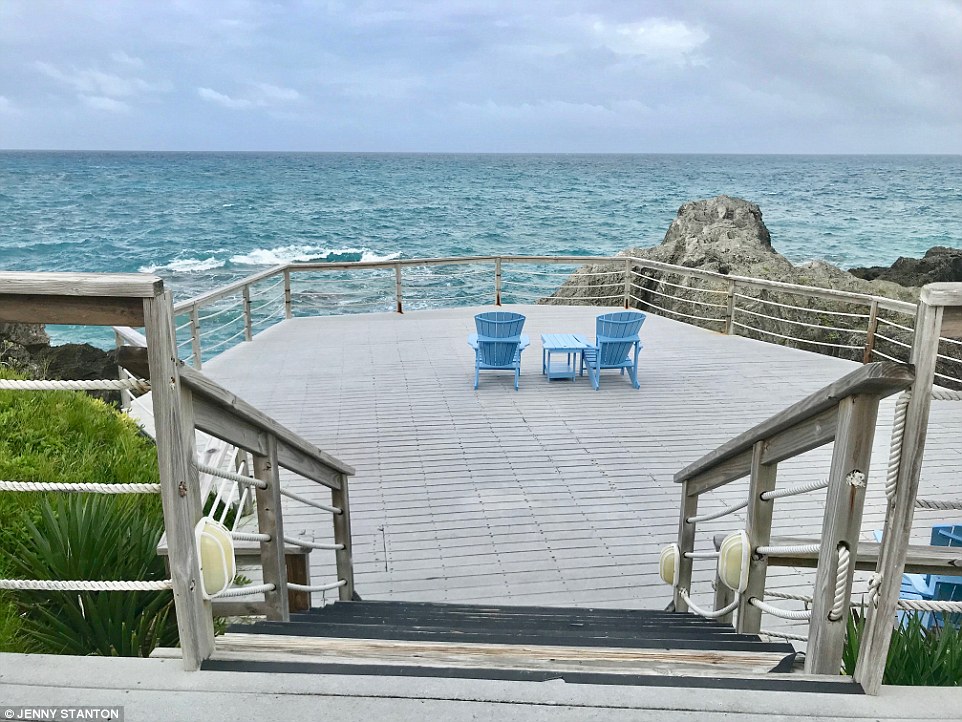 Romantic spot: Caso’s Point is a deck overlooking the water where couples can tie the knot. It is named after Larry Caso, who visited more than 120 times

At night you can hear the whistling tree frogs, which although only being the size of a thumbnail, are surprisingly loud.

However, much like cicadas in other countries, you quickly get used to them.

The family-run business has many personal touches, including Caso’s Point – a deck overlooking the water where couples can tie the knot.

General manager David Dodwell Jr told me it is named after Larry Caso, who visited more than 120 times. He would sit at that spot, which was then just rocks, and fish each day. Following his death, it was named after him.

After just three nights at The Reefs, it was clear to me why Mr Caso visited year after year. The beauty of the resort, on this unique island truly won me over.

For US travelers, rates start from $375 per night based on two adults sharing a poolside room on a bed and breakfast basis.

For UK travelers, Prestige Holidays (tel: 01425 480400) offers 7 nights in a poolside room at The Reefs Hotel & Club from £1,615 per person, based on two adults sharing on a bed and breakfast basis, including return flights from London Gatwick to Bermuda with British Airways and private transfers. Price includes a saving of £766 per couple for bookings made by 30 September. Priced for travel on 16 January 2019.