Lahore: Imran Khan made a name for himself on the world's cricket pitches and in London's nightclubs. But in the two decades since he began striving for higher office in Pakistan, he has undergone a complicated transformation.

He has embraced pious Islam, railing against the United States and distancing himself from his partying days – though his political organisation still uses a cricket bat as its symbol.

After declaring victory on Thursday, Khan looks set to become the leader of Pakistan, an Islamic republic with nuclear weapons. He enjoys genuine popularity across this country and cordial relations with Pakistan's domineering military. He has used his celebrity, his charisma and his money to campaign against corruption, one of the most unifying issues in a poor nation that struggles with many dividing lines.

Pakistanis have witnessed one political dynasty after another enrich itself while the country crumbles. Public hospitals languish in frightening disrepair; infant mortality has reached higher rates than just about anywhere else in Asia; and countless young Pakistanis flee this country each year in search of work as drivers, janitors and construction workers abroad because there are so few decent jobs at home.

Khan has presented himself as a populist antidote to all that.

"He has no direct corruption scandal attributed to his person, which is rare in Pakistan, particularly with politicians," said Raza Rumi, a prominent Pakistani journalist who is a political analyst at Cornell's Institute of Public Affairs.

But it is not simply Khan's clean image that explains his success this time around. 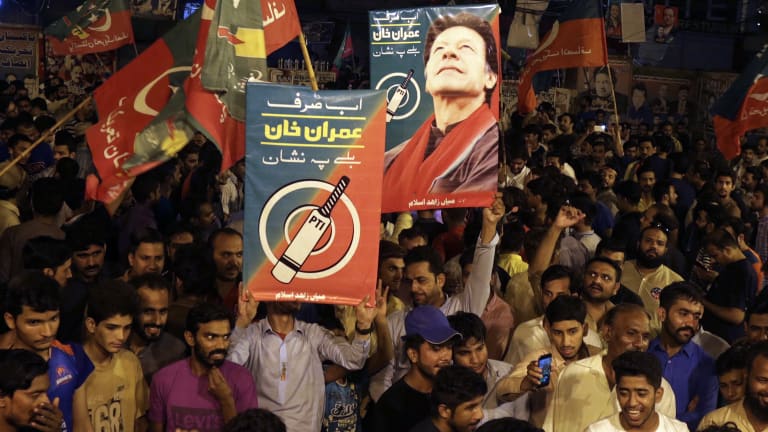 Supporters of Imran Khan celebrate reports of his victory in Islamabad, the capital of Pakistan.

Evidence is mounting of extensive political manipulation by the country's military authorities. Rights advocates and Khan's political rivals accuse the military of selectively targeting Khan's opponents, and muzzling the press when it has been critical.

The leader of what had been Pakistan's pre-eminent political party, three-time prime minister Nawaz Sharif, was imprisoned less than two weeks ago. A year before, Supreme Court justices ousted him from office in a ruling that was widely seen as having been made under pressure by the army.

Many members of Sharif's party – the Pakistan Muslim League (Nawaz) – have defected, in what others have described as a targeted campaign by the security services to effectively behead the organisation. 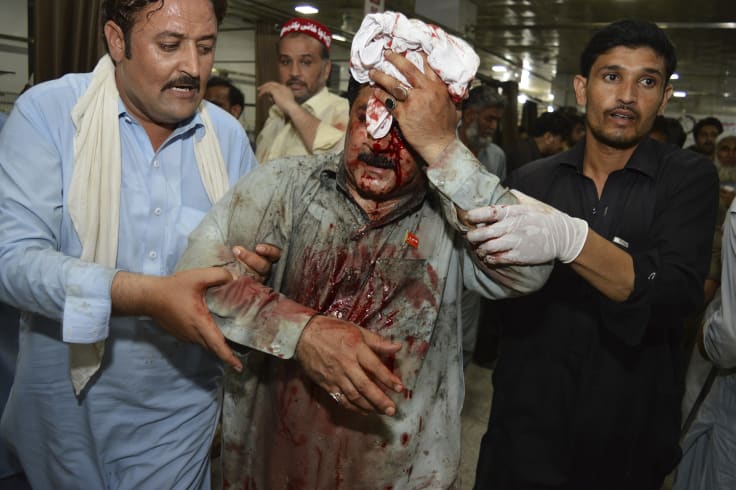 Volunteers rush an injured person to a hospital following a suicide attack on an election rally in Peshawar, Pakistan, earlier this month.

If the pattern of Khan's political career to this point has been to underperform despite his advantages, in this election he may finally have too many advantages to fail.

Khan speaks in a deep voice and comes across as confident and relaxed, down-to-earth but also perhaps a touch remote.

And he insists that he is not in the army's pocket – even as he expresses his support for the military.

"I think a democratic government rules from moral authority," Khan said in an interview with The New York Times this northern spring. "And if you don't have moral authority, then those who have the physical authority assert themselves. In my opinion, it is the Pakistan Army and not an enemy army. I will carry the army with me."

Pakistan's military has directly ruled for much of this nation's history and seriously meddled in political affairs for much of the rest. Many analysts are sceptical about Khan's claims of independence.

"He is their puppet," said Christine Fair, a political scientist at Georgetown University. "He is where he is now because of the army and ISI" – Pakistan's military intelligence service – "which have engaged in massive prepoll shenanigans and will continue the day of the elections and after to ensure an Imran Khan-led coalition."

How will Khan then govern? 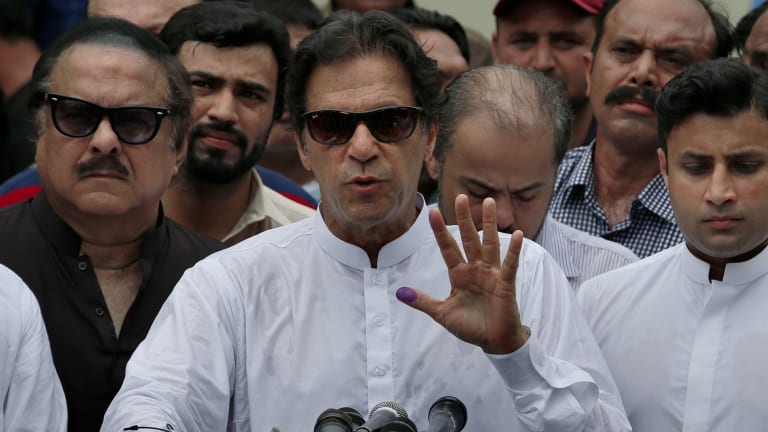 Imran Khan speaks after casting his vote in Islamabad.

Pakistan is a pivotal nation, the world's sixth most populous, nuclear-armed and a geopolitical hot spot because of its longstanding enmity with India and its support for militant proxies including the Afghan Taliban.

Khan has said he would like to make peace with India. And though he criticised some of the Taliban's violence, he has also publicly defended the group and its aims. He has taken a hard line against the US, bitterly complaining about drone strikes in Pakistan and calling the war on terrorism "madness". 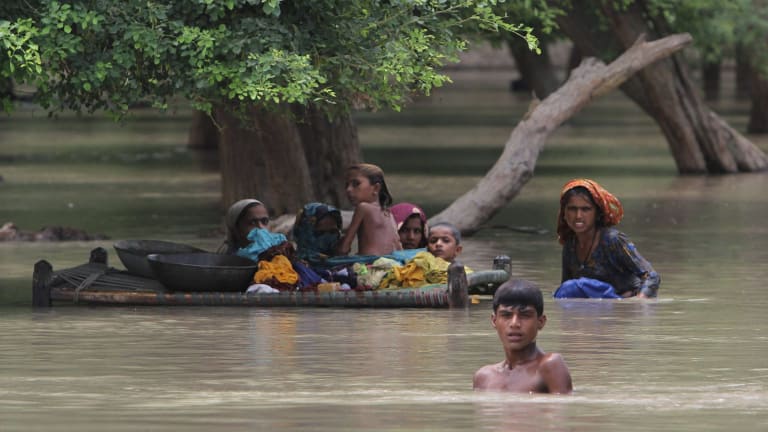 Villagers wade through floodwaters in Rajanpur, Pakistan, in 2015.

Domestically, he is likely to be overwhelmed. Pakistan's economy keeps sliding, and many public assets are in crisis, including the electricity grid and water supply. 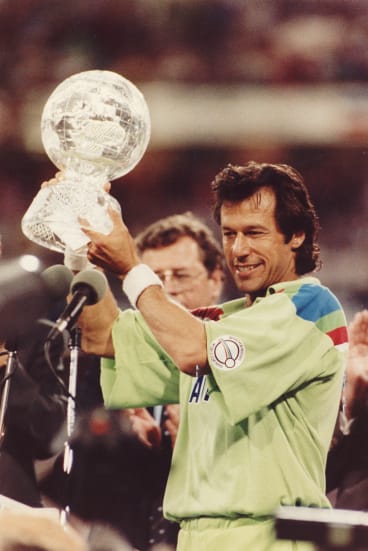 Imran Khan with the World Cup after Pakistan defeated England at the MCG in 1992.

Though Khan's personal credentials for governing are still an unknown, his party has governed the vast but sparsely populated province of Khyber Pakhtunkhwa since 2013. While its record there is mixed, it has been credited with improving government services.

Khan, 65, has had an enchanting life, though not always a consistent one.

Born to a privileged family, educated at Oxford, a lover to many beautiful and famous women and a superstar athlete considered one of the best in cricket's history, his experiences could not be more different than those of most Pakistanis.

He reached heroic status in 1992, captaining Pakistan's cricket team to a World Cup final victory over England, the former colonial power. It was an immense moment of national pride, and Khan was at the centre of it. He was also 39 and nursing a shoulder injury.

A few years later, he went through a soul-searching conversion. He raised millions of dollars to build a cancer hospital for the poor (his mother had died of cancer) and he started to become more deeply interested in Islam. He moved away from the limelight and dating celebrities, saying that kind of life had never been very satisfying.

"It looks from the outside very glamorous, great, but actually it's not," he told a British newspaper. "It's these transitory relationships. They're pretty empty."

In 1996, he founded his Movement for Justice, or Pakistan Tehreek-i-Insaf (PTI). His party struggled in obscurity for years, barely winning any seats in Pakistan's legislature, and for a time, Khan the superstar became Khan the joke. A Pakistani newspaper ridiculed him as "Im the Dim"; others called him "Imran Khan't".

The PML-N and the PPP, founded by the Bhutto family, proved better organised. They had established vast patronage networks throughout the country.

In many areas, landlords and tribal chiefs still command enormous sway. Such grandees, if given the right incentives, can deliver huge blocks of votes, which Khan's scrappy political outfit struggled against. 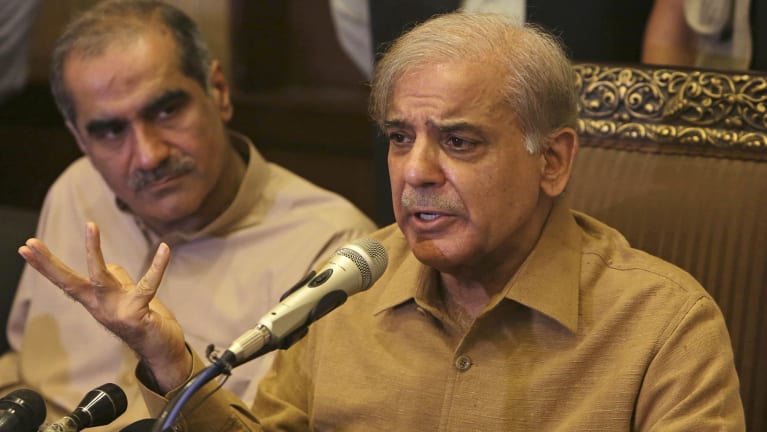 But even during these years, Khan attracted a passionate following. "Who will save Pakistan?" his supporters would cheer at his rallies. "Imran Khan! Imran Khan!"

Many conservative Muslim Pakistanis now forgive him for his decadent past.

"How he behaved before, that's his business," said Tanveer Haider, a Pakistani crane operator working in the Middle East who flew home this week so he could vote for the PTI. "I care about what he will do for this country. Of all the politicians, he will do the most."

Analysts say Pakistan is desperate for change, and that is what Khan represents.

"The vast section of urban Pakistanis, not all, are kind of tired of the two parties," Rumi said. "They feel that we need to move beyond them and he's a way out." 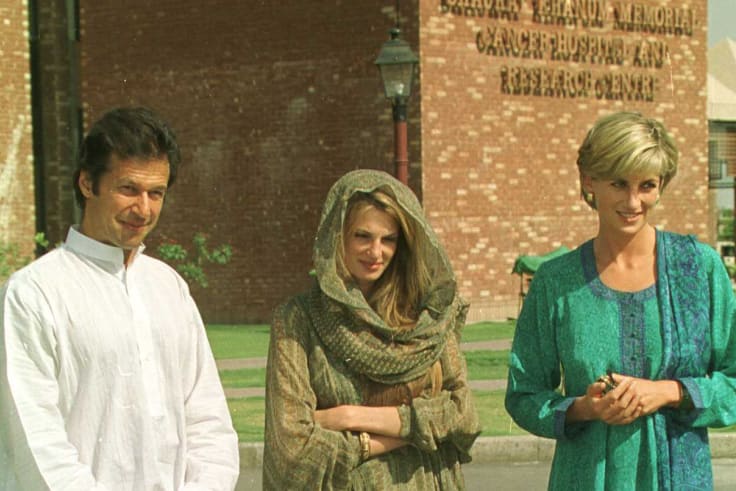 Imran Khan with his then wife Jemima and Princess Diana in 1997, outside the cancer hospital he built and named after his mother.

For all the fawning that Khan has enjoyed, he has also taken his lumps and shown a fair bit of resilience – particularly when it comes to the consuming attention given to his private life.

His first wife was Jemima Goldsmith, a British heiress with some Jewish heritage. Soon enough, Khan was accused by some Pakistanis of being controlled by a Zionist conspiracy, which he laughed off.

His second wife recently published a memoir that included allegations of lurid indiscretions in Khan's private life; he has let that roll off his back as well.

His third and current wife is known as a spiritual healer; already many Pakistanis are quietly talking about the rituals Khan and his wife are believed to practice.

Trying to sum up what Khan stands for, Ashutosh Varshney, the director of the Centre for Contemporary South Asia at Brown University, said: "Imran is a maddening medley of an incredible sporting talent, an incorrigible international playboy and a vengefully ambitious politician. He can't bring democracy to Pakistan – for democracy to institutionalise, the army must step back as a minimum condition."

"No democracy can work that way," Varshney added, "elections or no elections."

Shahbaz Sharif took over as chief of the beleaguered centre-right former ruling Pakistan Muslim League party after the Supreme Court last July ousted his elder brother and then-prime minister Nawaz Sharif from office on charges of corruption stemming from the leaked Panama papers. Shahbaz was twice chief minister in Punjab province, where 60 per cent of Pakistan's 200 million people live.

Nawaz Sharif, who is now in jail appealing a 10-year prison term for corruption, has had a tumultuous relationship with Pakistan's powerful military despite entering politics at the military's behest. Shahbaz Sharif, by contrast, has maintained balanced ties with the military.

Bilawal Bhutto Zardari, 29, is the son of the slain former prime minister Benazir Bhutto. His PPP's political strength lies in southern Sindh province. Since his mother's assassination by Taliban militants in 2007, the party's fortunes have dwindled. Benazir Bhutto served as prime minister twice and had returned to Pakistan in an attempt to return to power when she was attacked and killed.

The Bhutto family has been dogged by tragedy. The party's founder, Zulfiqar Ali Bhutto, was ousted in a military coup and hanged by military dictator Mohammad Zia-ul-Haq. Benazir's husband, Asif Ali Zardari, served as Pakistan's president for five years until 2013.

Maulana Fazlur Rehman, a pro-Taliban, anti-US radical Islamic leader, heads the alliance of radical religious groups that ruled Pakistan's north-west from 2002 to 2007 following the September 11, 2001, attacks in the United States.

In the past, the MMA had made political gains by opposing US involvement in Afghanistan. It was dormant for 10 years until leaders of right-wing religious parties decided to revive it and allow it to participate in this election. 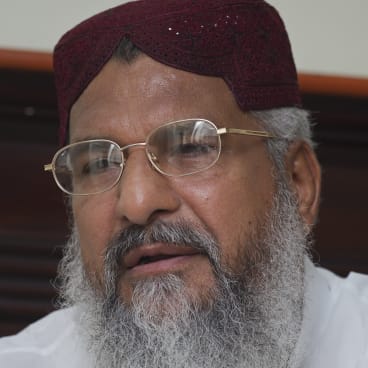 A viciously anti-Shiite leader, Mohammed Ahmed Ludhianvi heads this offshoot of the banned Sipah-e-Sahaba Pakistan, a radical religious party that reviles Shiite Muslims as heretics and has been accused of violent attacks against them.

ASWJ is not registered with the elections oversight body but its candidates are running for seats as independents both for the provincial legislatures and the National Assembly. According to party spokesman Oneeb Farooqi, it fielded 170 candidates.

The Pakistani government recently asked authorities to unfreeze Ludhianvi's bank accounts and assets and remove the ban on ASWJ, drawing criticism from rights groups and analysts who question the government's seriousness in tackling extremism. 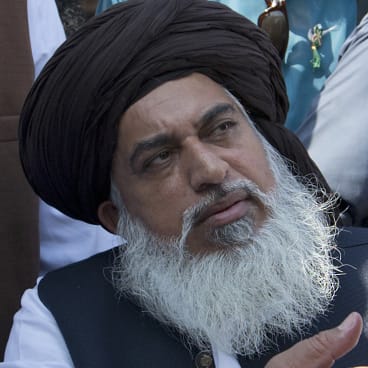 Rizvi has made enforcement of the blasphemy law a central plank in his party's campaign. The law calls for an automatic death penalty for anyone deemed to have insulted Islam or the Prophet Muhammad. Frenzied mobs have gone on rampages and killed people at the mere suggestion that  an act of blasphemy has been committed. Critics say the law is used to incite violence and also to settle individual grudges.