Do mutts REALLY enjoy the 'dogglebox'? The 'petflix' TV service

Do mutts REALLY enjoy the ‘dogglebox’? A ‘petflix’ TV service claims to keep your pooch happy… and it’s just part of a booming market in ways to entertain Fido

The rambling woodland trail, the muddy riverside path, the yomp up a grassy hill; each holds its own special appeal. But even the finest walk can start to feel monotonous when you’ve done it day in, day out for months during lockdown.

But there could be an answer for your four-legged friend: the virtual walk.

Windswept beach? You’ve got it. Or maybe a scenic meadow? It’s all there, a few clicks of the computer mouse or television remote control away.

An online subscription service for pet owners called Relax My Dog — and its sister site Relax My Cat — has been in big demand since the pandemic began. 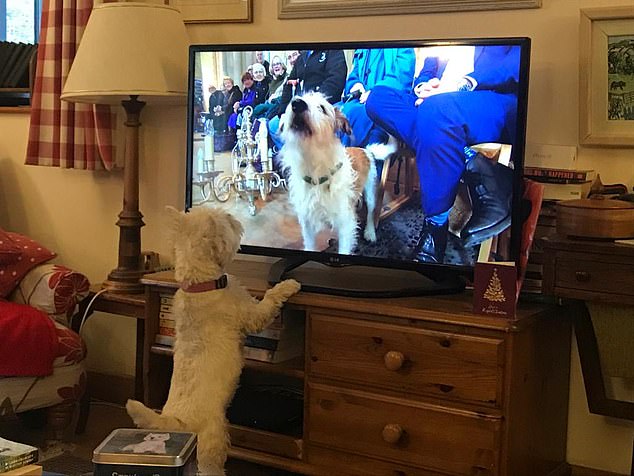 Hit the paws button: A West Highland terrier is glued to the screen

The site — Petflix, as it has been dubbed — has experienced rocketing growth in the past year, with more than 180 million views across its platforms in 2020, up from 120 million in 2019.

There are dozens of videos for dogs and cats available from the twin services, which offer both television and audio content on subscription for about £3.50 a month — a snip when you’re working from home and can’t afford to send your pet to doggy day care.

Alternatively, pet-specific music can be played alongside picture slideshows, some of which are available free on YouTube. One music compilation alone — ’15 hours of deep separation anxiety music for dog relaxation’ — has chalked up 15 million views since it was posted online two years ago.

But is television for pets just barking mad, or can our canine and feline friends actually obtain some benefit from a spot of screen time?

As plenty of dog owners will affirm, there is no doubt many of our mutts watch TV — or at least, recognise in some way what is happening on screen.

A 2013 study published in the journal Animal Cognition showed that dogs could identify images of other dogs among pictures of humans and other animals, using their visual sense alone.

How they react will differ, depending on their breed and nature.

Many will get excited if they see another dog or hear it barking — some dogs not only bark at animals on the screen but also run behind the television set looking for them. Others are less concerned by what’s going on and happy just to half-watch.

But what dogs can see on screen is different from what we see.

Dogs’ eyes are also more sensitive to movement — and some experts believe they have been better able to perceive (and so enjoy) television since the surge in high-definition viewing led to a reduced flicker-rate. 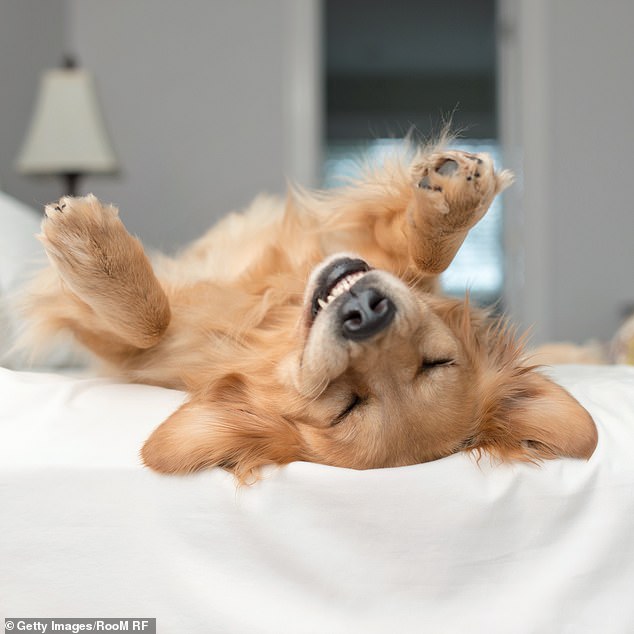 A 2013 study published in the journal Animal Cognition showed that dogs could identify images of other dogs among pictures of humans and other animals. Stock image

Viewers of Relax My Dog (and similar footage) will have noticed everything is shot low — at dog height — while colours are muted and sounds played at a frequency designed to appeal to pet hearing. Dogs and cats hear at a far broader range of frequencies than us: dogs can hear up to 45,000 Hz (Hertz), while cats have an even higher range. Humans, in contrast, have a range only up to 23,000 Hz.

Given the financial potential of doggy television, investment in it has boomed since Amman Ahmed, the entrepreneurial brains behind Relax My Dog, launched his service in 2012. There is also a rival outfit called Dog TV, a U.S.-based subscription channel that promises to ‘prevent mental fatigue, depression and boredom’.

Amman Ahmed says viewing preferences can vary enormously from one pet to the next.

‘Some dogs like watching other dogs,’ he says. ‘Others don’t. They will just start barking if they see another dog.

‘Some dogs like watching sheep or birds. But the most popular stuff is virtual walks on the beach. Sometimes there might be another dog running across playing fetch, sometimes it’s an empty beach.

‘The colour is graded for dogs, so it’s like a washed purple colour to us. It’s a bit like a visual form of a guided meditation.’ 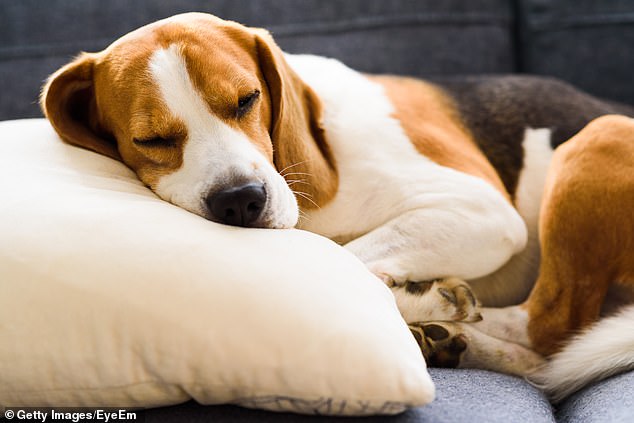 There are dozens of videos for dogs and cats available from the twin services, which offer both television and audio content on subscription for about £3.50 a month. Stock image

And what of cats? Does the average feline have similar tastes to its canine equivalent?

No, says Ahmed. ‘Cats like watching twitchy stuff, birds on the screen.’ Remarking on pets’ families being home more often, Ahmed says: ‘Cats are looking at their owners like, ‘Why are you still here?’ and he wonders whether owners are tuning in with their pets to unwind.

But it’s not just TV. Music is also being targeted at pets.

The music streaming site Spotify conducted a survey which found that 71 per cent of owners play music for their pets. Spotify subscribers can even create a playlist tailored for their dog, cat or hamster. Just log in, answer a few questions on your pet’s personality, provide its name and wait while the app scans your music catalogue to curate a suitable playlist.

Amazon Prime has also previously had content for pets on its site, and even Classic FM has an annual Pet Sounds evening, around Bonfire Night each year, to help pets and owners stay stress-free in the fireworks season.

The benefit of sounds for pets has long been espoused, with studies showing classical music had a calming effect on dogs in rehoming centres (Relax My Dog has several contracts with kennels in the U.S.). In 2018, police in Spain introduced a programme named the Mozart Effect (no, not Bach!) in which 22 service dogs were played concertos and symphonies to help calm them after the stresses of sniffing out explosives and rescuing people.

But if Mozart isn’t your bag, fear not. In 2017, researchers from Glasgow University played six-hour Spotify playlists from five genres of music to dogs from rescue centres.

Dogs’ heart rates, their cortisol levels and behaviour (barking, etc)was recorded as they listened and when no music was played.

The result? Fire up Bob Marley: stress levels were reduced when they listened to reggae music, soft rock and classical music, yielding (by a paw) better results than pop and Motown.

But clinical animal behaviourist Rosie Barclay warns that videos and music can never be a substitute for normal exercise during lockdown.

For one thing, television sets don’t smell — and for your dog, a walk isn’t so much about pleasing its eyes as following its nose. Yes, our pets need to get outside, as we do, for exercise — but they have a far sharper and more complex sense of smell than we do and need the stimulus it provides to remain happy.

They often chase prey animals because they smell them.

‘It’s best to go for a walk rather than sit in front of the television and watch one,’ says Rosie.

‘If your dog is sitting watching television and looks happy and relaxed and you think it’s enjoying what it sees, there is no harm in it. But if it suddenly jumps up and starts barking like mad, it’s probably overexcited and you don’t want to encourage that.’

She also cautions against using TV to provide a form of companionship for dogs that become distressed when left alone. If that’s the case, she says, owners should seek professional help.

In future, will there be a new page in the television listings just for our four-legged friends?

Unless someone brings us smell-o-vision, maybe not. But if you have run out of places to explore, you could settle down on the sofa with Fido and check out his favourite (virtual) place to visit.