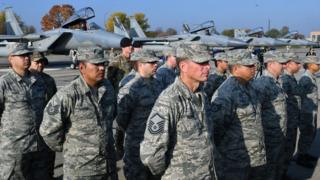 US President Donald Trump has repeatedly complained that Europe’s Nato members are not spending enough on the alliance.

He believes the US should not have to bear the burden of funding the defence of the continent.

Nato was set up 70 years ago as a collective defence system to guard against potential threats from the former Soviet Union.

So with the US president visiting Europe in June, what does the US contribute towards maintaining Nato compared with the other 28 members?

The United States accounts for nearly 70% of the total spending on defence by all Nato members.

In terms of its GDP (gross domestic product, the total value of goods produced and services provided) it spent roughly 3.4% on defence in 2018, according to Nato estimates.

The point to remember is the US is a global military superpower, so has defence commitments not only in Europe but around the world.

One report by the London-based International Institute for Strategic Studies (IISS) estimated that direct spending by the US on European security accounted for less than 6% of its total defence outlay.

This includes money for running Nato as an organisation and for US defence activity in Europe – the costs of missile and other defence systems and military and civilian personnel stationed in the continent.

But she adds that in the event of a major crisis in Europe, the US may well draw on more of its $643bn total defence outlay to reinforce Nato.

What do European countries spend?

As of March 2019, Nato information shows there were only six countries – apart from the US – who are estimated to have spent 2% or more of their GDP on defence the previous year:

Most of Nato’s European members spent an estimated 1% to 1.99% last year.

Overall, European defence expenditure has been growing since 2014, with the largest increases mainly in central and eastern European countries, although the rate of increase slowed last year. 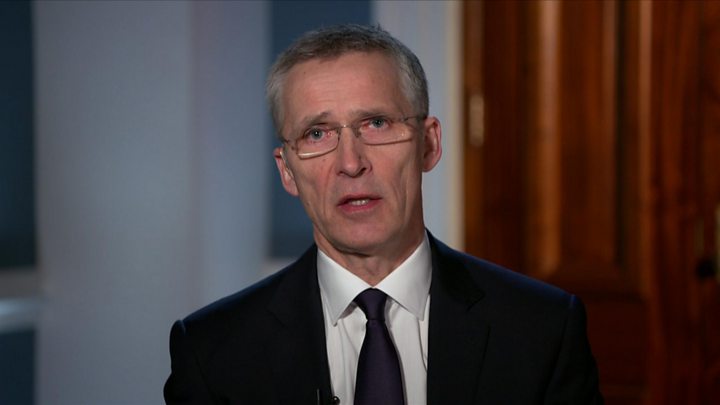 There is another target that Nato members pledged to meet by 2024 – that 20% of their defence expenditure should go on acquiring and developing equipment.

As of 2018, 15 Nato countries in addition to the US were estimated to have met this target.

An analysis for the UK parliament describes this as a more meaningful measure of defence capability because without adequate equipment, military effectiveness is reduced.

The BBC’s Defence correspondent Jonathan Marcus points out that there has been growing talk among some allies of building a more autonomous European defence system.

Angela Merkel: Europe ‘can no longer rely on allies’ after Trump and Brexit

However, he adds: “Any suggestion the Europeans could replace US military might is illusory.”

How many personnel does the US contribute?

At the height of the Cold War, there were more than 400,000 US military personnel in Europe.

Today, the US has just over 65,000 active duty personnel in Europe, including Turkey.

Germany currently hosts by far the largest number of US forces in Europe, followed by Italy, the UK and Spain.

But the biggest single deployment of US personnel overseas is not in Europe – it is in Japan, and there are also large numbers in South Korea.

In Afghanistan, the US is currently the biggest contributor to the 17,000-strong Nato-led mission there.

It is worth adding that some US personnel based in Europe support other non-Nato operations.

These include the US Africa Command, which has its HQ in Stuttgart, in Germany, as well as elements of the US Transport Command, which organises the movement of forces and material around the world.

US military numbers also fluctuate as forces are rotated in and out of the European theatre – sometimes for short-term military exercises.

Overall, the US has taken significant steps to increase the tempo of exercises in Europe – all in response to what is seen as a more assertive Russia.

What else does the US provide for Nato?

One key component of the US commitment to Europe is a missile defence system.

It is designed to help guard against potential ballistic missile attacks from outside the continent, particularly the Middle East.

The land-based missile sites are in Romania and Poland, with a radar system hosted by Turkey.

Interceptor missiles are also carried on board US warships operating in the Mediterranean.

The deployment of this system drew criticism from Russia, which described it as a threat.

It is one of several systems the US currently has to defend against incoming ballistic missiles.