A LIVE TV broadcast turned to chaos when it got crashed by the weatherman’s dog.

FOX13 Tampa’s Paul Dellegatto was giving the forecast when his Golden Retriever, Brody, ran into the makeshift studio in his home office. 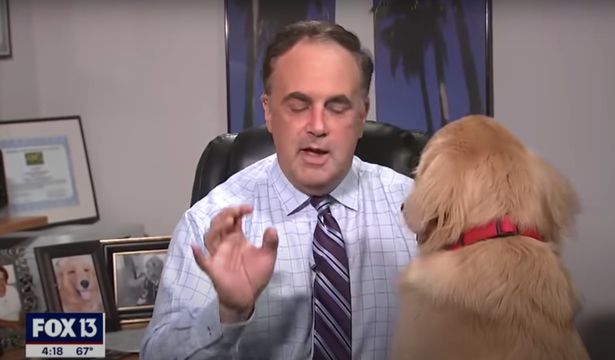 In a video that’s gone viral on social media, Brody jumps onto the TV meteorologist's lap, knocking the laptop and causing the program that shows the weather graphic to freeze.

“The [weather] map’s not gonna move because he just whacked the computer with his head, so let me just verbalize the forecast,” Dellegatto told viewers.

Carrying on despite the disruption, the weatherman finished the live segment while patting Brody, who stood with his paws on Dellegatto’s lap. 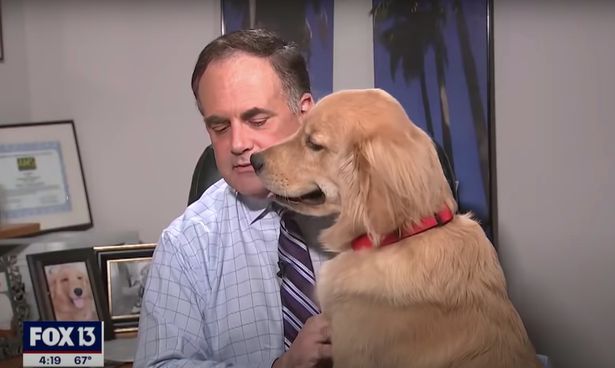 Brody’s starring role continued when he leapt up to the window, through which the FOX13 cameraman was filming the broadcast.

“He’s jumping up looking for [the cameraman] outside the window. He’s gone crazy trying to find him.”

"Don’t take this the wrong way, Paul, but this is amazing and great,” anchor Linda Hurtado said.

“Thanks for bearing with us, we’ll have your complete forecast including all the graphics, coming up at 4.45,” Dellegatto ended his broadcast.

Viral moments have brought some light relief to viewers during the coronavirus pandemic, as many news anchors and TV reporters work from makeshift home offices.

Florida reporter Jessica Lang was recording a new segment from home when her shirtless father walked into the frame.

A news reporter in California accidentally filmed her husband naked in the shower during a TV report from her home.

And an NBC weatherman who was working from home was recently caught on-air seemingly pant-less.