Bruce, a four-year-old brown bull lurcher, was found with holes in his head and a protruding eye after being attacked with a pointed object, believed be either a screwdriver or a piece of wood with a nail hammered into it. 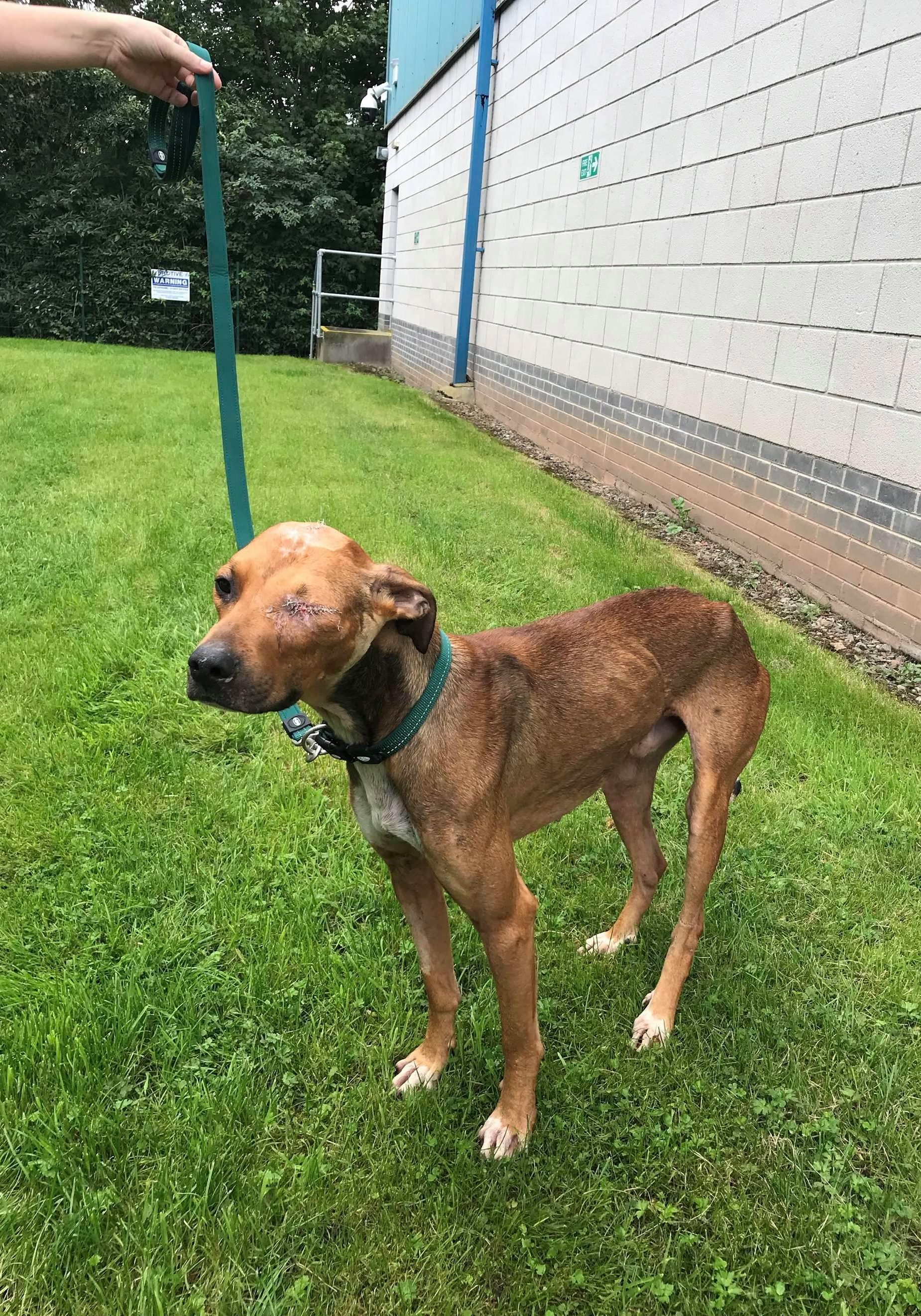 The traumatised pup was found wandering around Little Orton, on the outskirts of Carlisle, Cumbria, on Thursday 30 August.

A worried member of the public rushed him to a nearby veterinary clinic – where staff contacted the RCPCA who have cared for him since.

But now, after having his eye removed and being given plenty of care, Bruce is fighting fit and enjoying life.

RSPCA chief inspector Rob Melloy said he had never seen a dog in such a horrific state in his entire 20-year career. 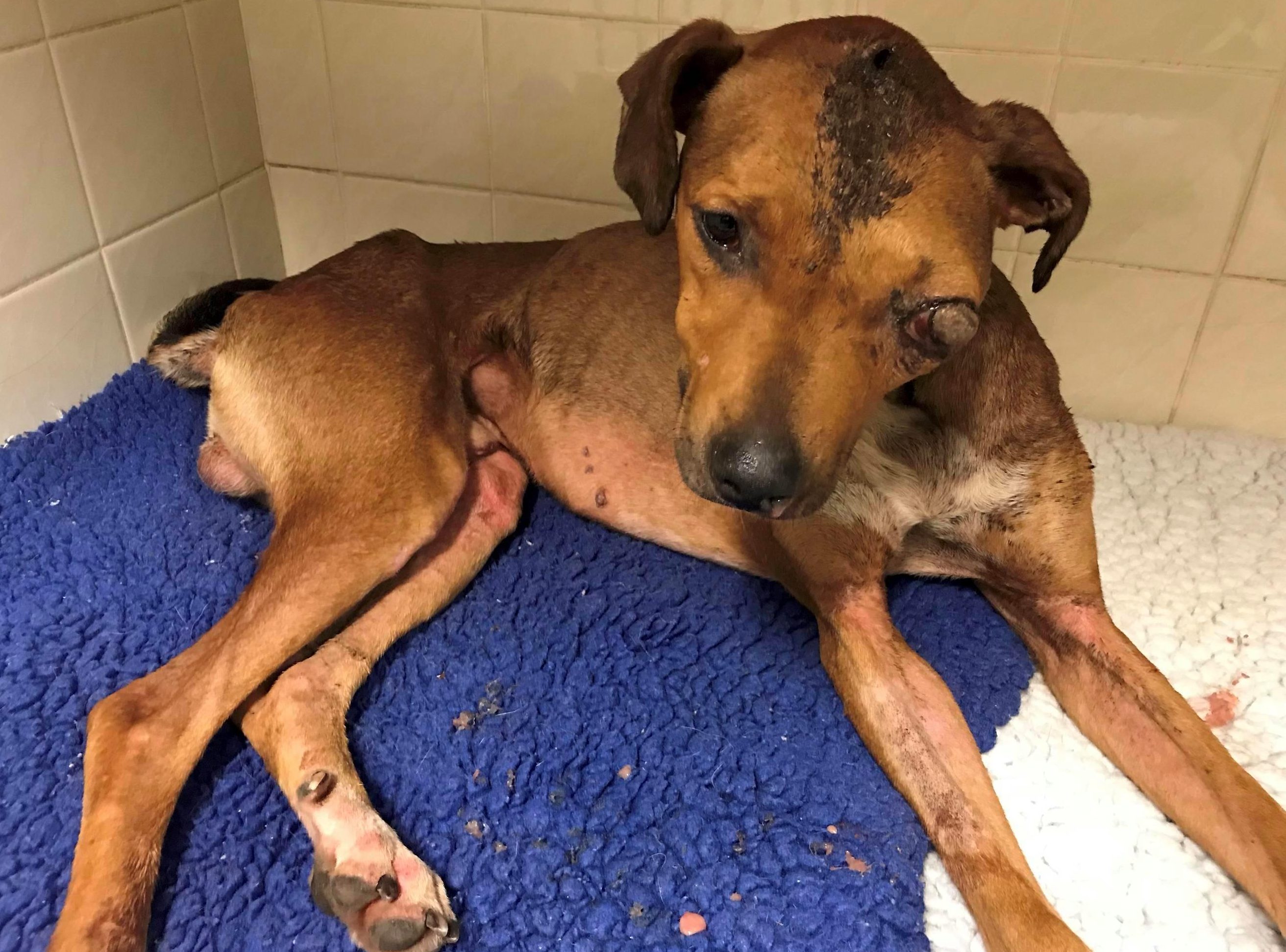 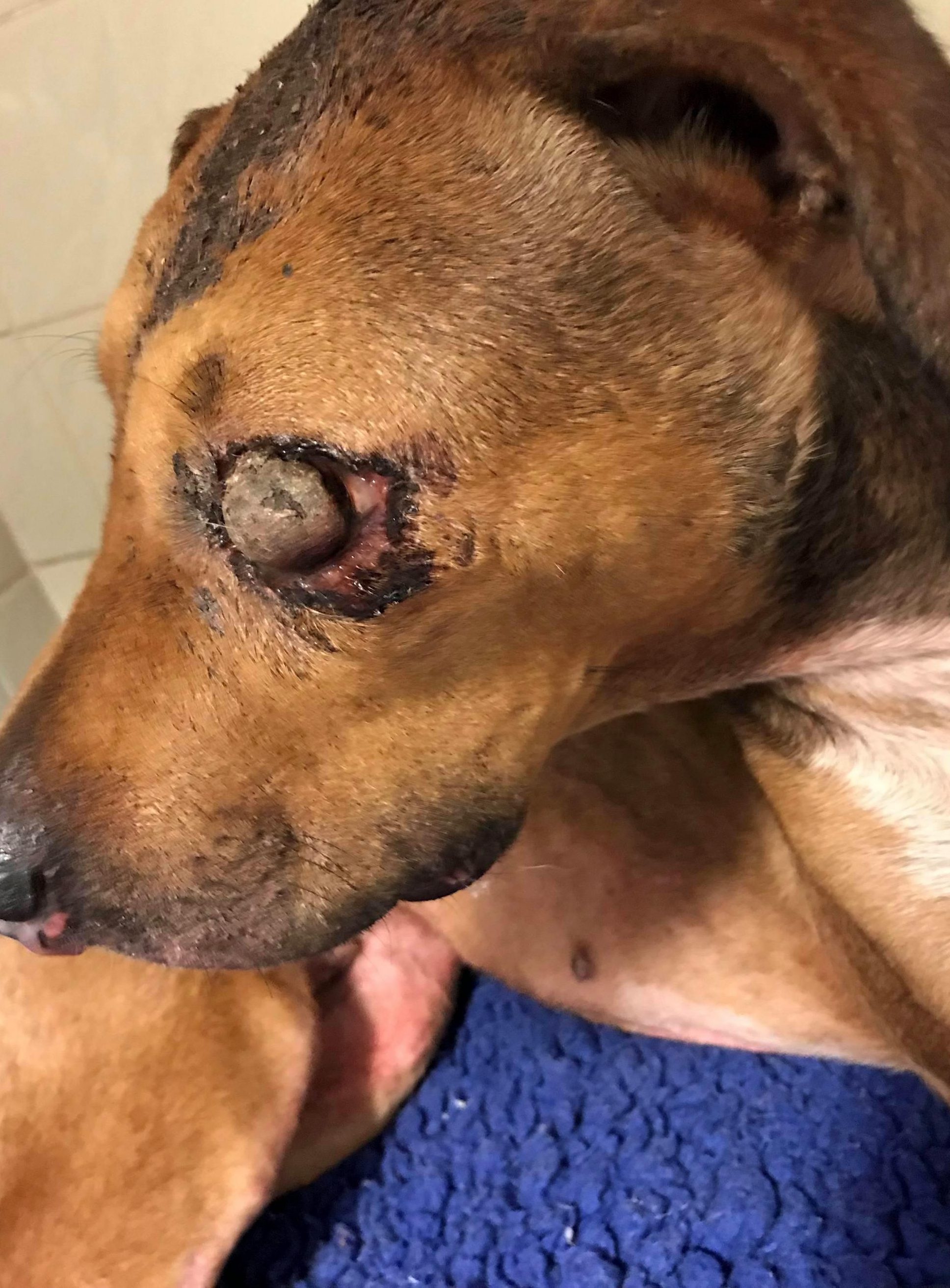 He said: "He had a swollen, protruding eye and a deep hole in the top of his skull.

"His face was bloodied and battered, his skull fractured in several places and his jaw broken, and his tail had been burned.

"He was also very skinny.

"We believe he had either been beaten with a screwdriver or a piece of wood with a nail hammered into it, giving him the severe puncture wounds and nasty eye injury which had then become infected and had to be removed. 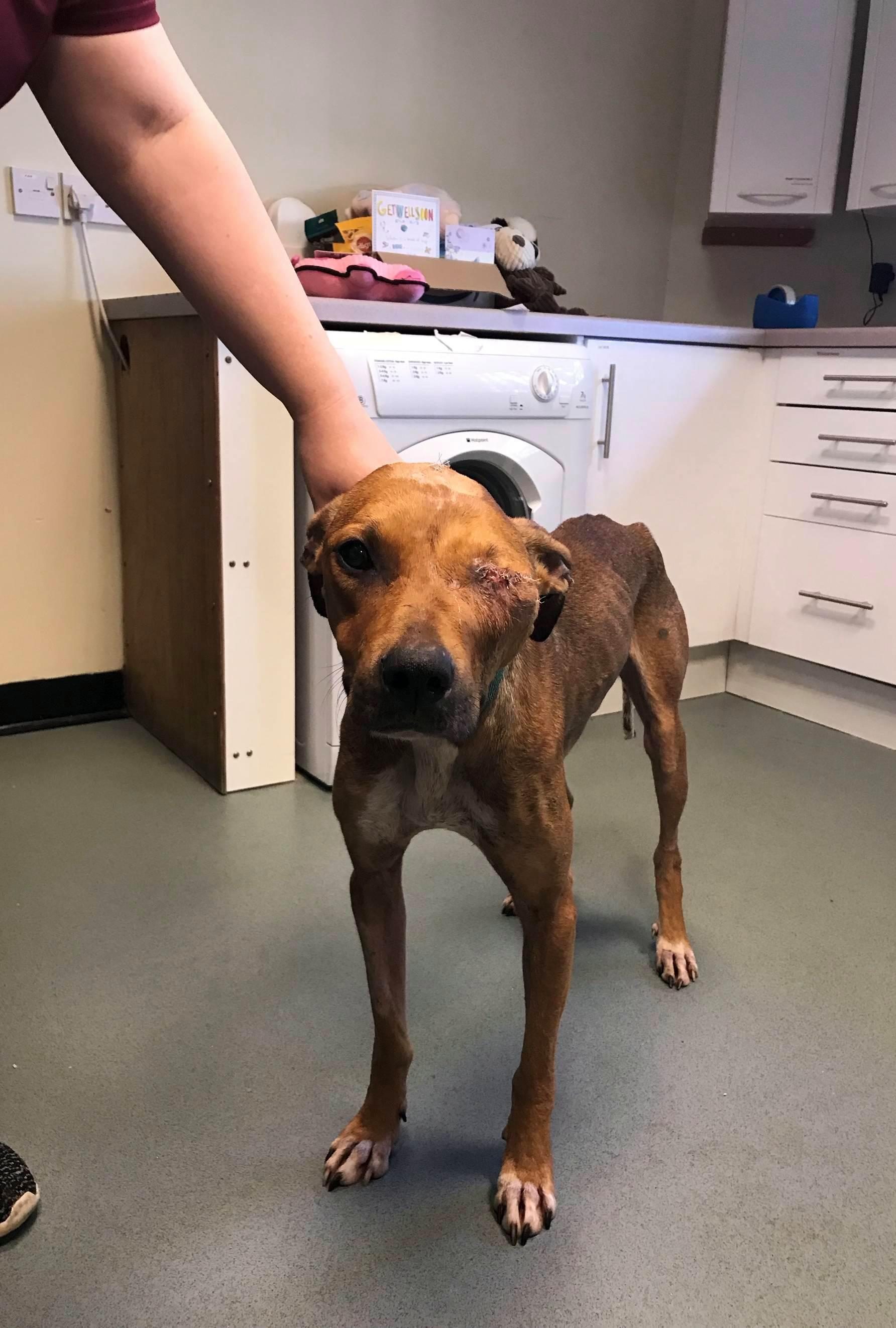 "The fur and skin around his rear end and tail were burned as if someone had tried to set him on fire.

"Shockingly, it's thought he'd been like that for three or four days before he was found."

Bruce is currently being looked after by a foster carer but efforts are not yet being made to find him a permanent new home.

Mr Melloy added:"It's nothing short of a miracle really. 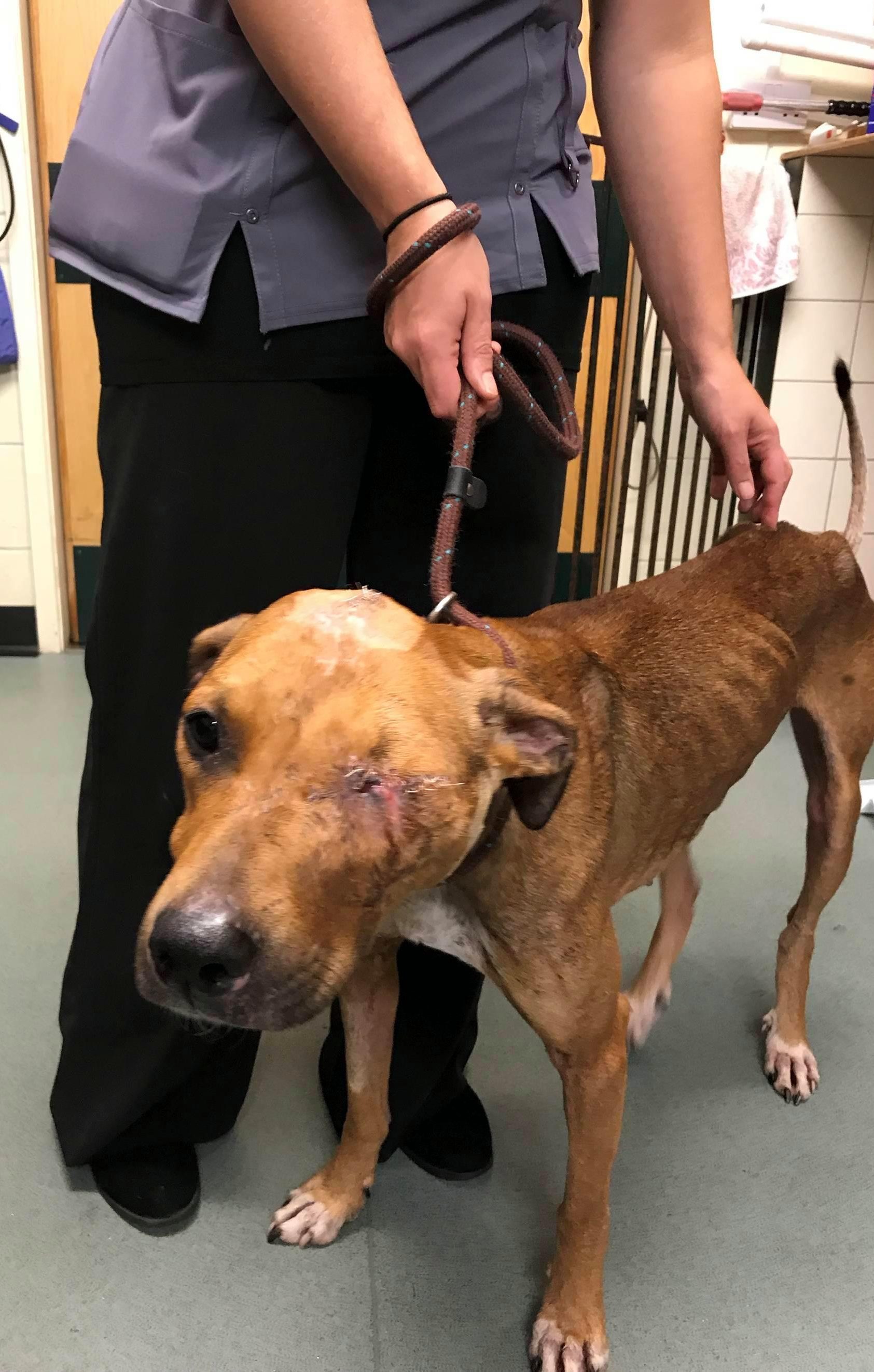 "We have been really worried, based on what we’ve been told by them, that Bruce was going to have such a poor quality of life in constant pain they may decide he needed to be put to sleep on welfare grounds.

"He can't yet open his mouth fully but is otherwise doing everything a healthy dog does which is amazing given all he’s been through.

"Some other specialists are looking over the scans and further surgery may be an option down the line, and if this is in his interest this will happen."

A national appeal for information to find the scumbags who abused Bruce – but they are still at large.

Rob added: "It’s very disappointing that we haven’t found who did this so far, and whilst we’re thrilled that Bruce is now able to move into the next chapter in his life, this case is not closed."

Anyone with specific information they think might help can call the RSPCA appeal line on 0300 123 8018.