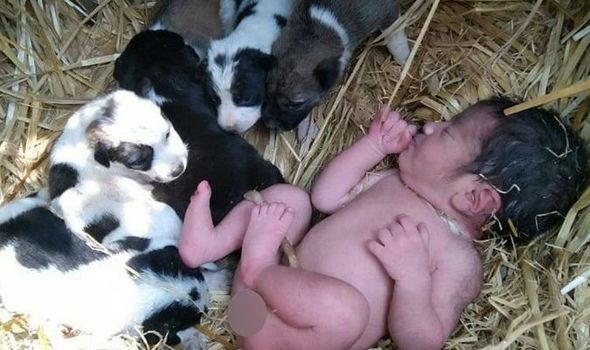 The baby was left in the night with no clothes and her umbilical cord still attached in the Chattisgarh province of India in mid-December. She was found the next day snuggled up with the dog and her puppies who were keeping her warm.

One local said the stray dog could have saved the tot’s life.

They said: “It’s possibly the warmth from puppies and their mother itself who had kept this newborn alive.

“Usually, the temperature dips at night and it’s already December. I must say, it’s her sheer luck.”

Incredible pictures show the newborn nestled alongside the puppies in the straw.

The baby was discovered uninjured after she was heard crying.

Locals alerted the panchayat, a local government body, who contacted the police.

She was taken to hospital and examined by doctors.

The little girl, who has been named Akanksha, has been referred to the Child Line Project.

An investigation is underway, and police are searching for her parents.

Local representative Munnalal Patel said they had found the newborn after heading out for daily chores.

They said: “At 11 in the morning, we saw that there is a newborn baby girl who was crying and lying alongside puppies in our village.

“We panicked and informed the health department before the newborn was taken to the hospital for further checkup.”

Of why the dog could have cared for the baby, animal trainer Shelby Semel told Romper dogs “bond tightly with their human pack.”

This could mean some dogs would “regard a baby as the latest addition to its own personal animal den.”

“[D]ogs are keenly aware of the hierarchy within their pack and are instinctively wired to watch over the weaker members.

“So they correctly identify the drooling, flailing creature that’s been brought into the home as not exactly being the alpha, and in need of their protection.”