A Canadian dog owner has been slammed for decorating her poodle to look like a skeleton from Mexico’s Day of the Dead festival.

But she has been criticized for going too far with the costume and people have questioned whether the dog is enjoying herself as she appears to be shaking. 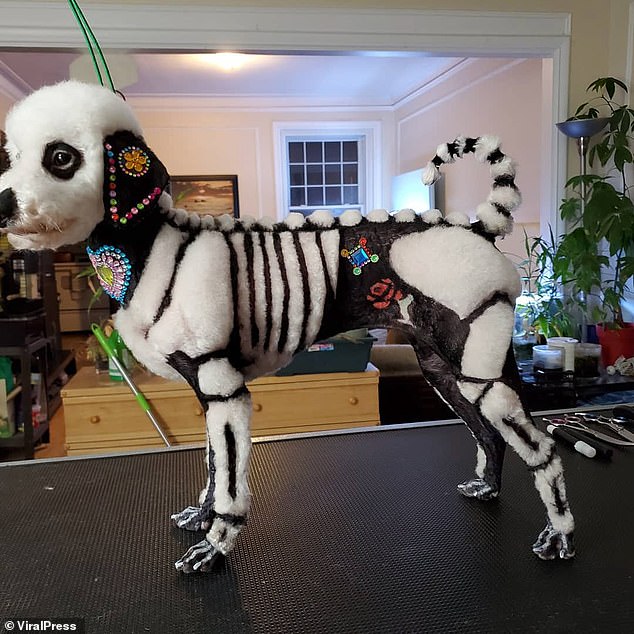 Video of the pet sparked outrage online with some viewers branding it ‘cruel’ and saying the dog appeared to scared.

Laura Chapman said: ‘That’s gone too far and I don’t like the look, it’s stupid. I feel sorry for the dog.’

Terez Maria wrote: ‘This is not cute or cool. It’a living thing not a toy. I think the owner knows its wrong.’

Alex Allen added: ‘This looks very uncomfortable and cruel, it’s like those toddlers in tiaras whose moms dress them up in skimpy clothes.’

Matthew Boudreau wrote: ‘Your dog doesn’t want to be dressed up and paraded. Why do people feel the need to do this? Why don’t you shave bits of your own hair off and post a picture of yourself?’

Samantha said that many people were supportive of her her dog’s appearance but admitted that others were having mixed reactions about it.

She said that her pooch had been trained from a young age for dog shows and had previously been part of the Canadian kennel club.

The dog lover added that now instead of doing dog shows, Glow Cotton Candy now shows off her talents in grooming competitions. 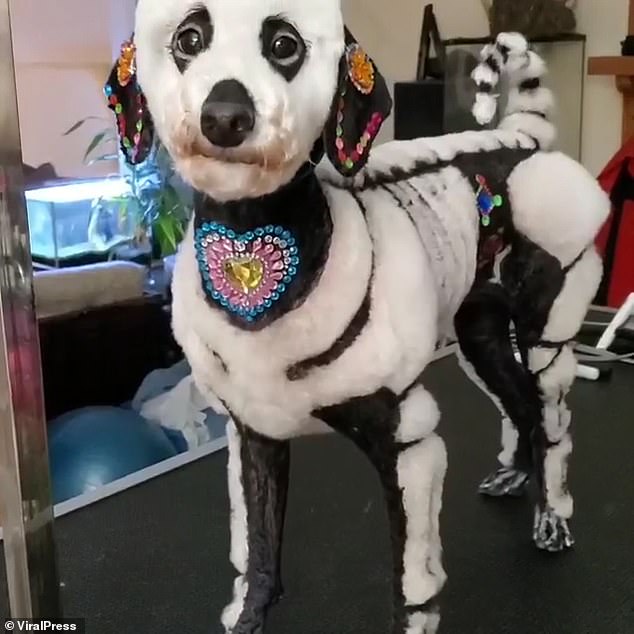 Samantha said: ‘Glow Cotton Candy is slightly shaking because she is anticipating the handful of treats I had used to get her to follow the camera. She is a trained professional and groomed very often.

‘All products used are pet safe, the gems are stickers and were only used for the post due to their size. This type of grooming is done in short sessions over a few days or weeks. No different for the dog than a normal grooming session.

‘I do not need to force her to do anything because she loves to get pampered. She has been groomed and trained for this since five weeks of age and she’s turning four in February. She’s a very well loved and happy dog.’

The pooch resembled one of the participants in Dia de Muertos, or Day of the Dead, a Mexican holiday which involves family and friends gathering to pray for lost relatives on their spiritual journey.