Somalia: A truck bomb exploded at a busy security checkpoint in Somalia's capital on Saturday morning, killing at least 78 people including many students, authorities said.

It was the worst attack in Mogadishu in more than two years, and witnesses said the force of the blast reminded them of the devastating 2017 bombing that killed hundreds. 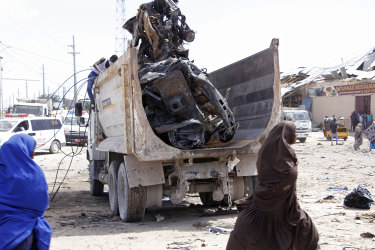 A truck carries wreckage of a car used in a bomb. Credit:

Police Captain Mohamed Hussein said the blast targeted a tax collection centre during rush hour as Somalia returned to work after its weekend. A large black plume of smoke rose above the capital.

Most of those killed were university and other students returning to class, Mayor Omar Mohamud Mohamed said at the scene. Two Turkish brothers were among the dead, Somalia's foreign minister said. 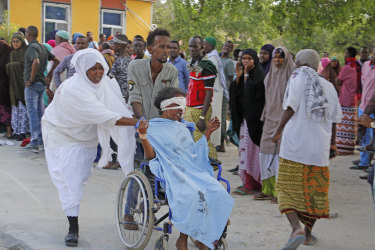 The injured, many of them students, were helped by civilians.Credit:

Bodies lay on the ground amid the blackened skeletons of vehicles. At a hospital, families and friends picked through dozens of the dead, gingerly lifting sheets to peer at faces. Hundreds of Mogadishu residents began to donate blood in response to desperate appeals.

"Some of those dead were police officers, but most of them were students," witness Mohamed Abdi Hakim said. Somalis mourned the deaths of so many young people in a country trying to rebuild itself after decades of conflict.

There was no immediate claim of responsibility but the al-Qaida-linked al-Shabab often carries out such attacks. The extremist group was pushed out of Mogadishu several years ago but continues to target high-profile areas such as checkpoints and hotels in the seaside city.