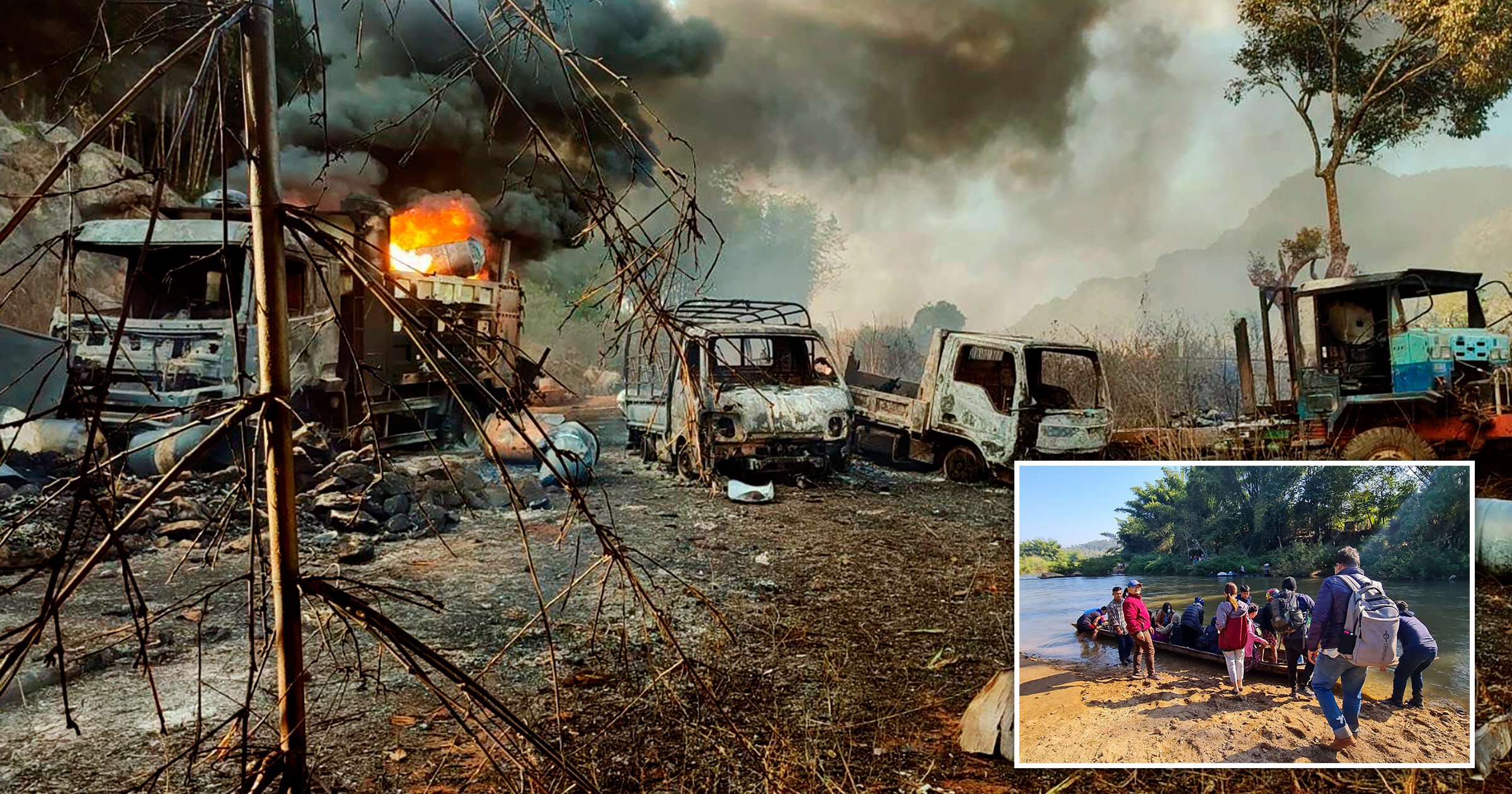 More than 30 people, including children, have been killed and their bodies burnt in Myanmar with government troops accused of being behind the attack.

Accounts of the massacre, which is understood to have taken place on Christmas Eve, in Kayah State, have not yet been independently verified.

But photos of the aftermath of violence in the eastern village of Mo So, just outside Hpruso where refugees have been sheltering from an army offensive, have circulated social media.

They show the charred bodies of more than 30 people in three burned-out vehicles.

Myanmar has been in chaos since a coup in February, with more than 1,300 people killed in a crackdown by security forces, according to a local monitoring group.

‘People’s Defence Forces’ (PDF) have sprung up across the country to fight the junta, and have drawn the military into a bloody stalemate of clashes and reprisals.

A member of a local PDF group said its fighters had found the trucks on Saturday morning after hearing the military had stopped several vehicles in Hpruso after clashes with its fighters nearby the day before.

‘When we went to check in the area this morning, we found dead bodies burnt in two trucks. We found 27 dead bodies,’ he told AFP on condition of anonymity.

The Myanmar military denied the claims.

A junta spokesman said a clash had broken out in Hpruso on Friday after its troops attempted to stop seven cars driving in a ‘suspicious way’.

Troops had killed a number of people in the following clash, spokesman Zaw Min Tun said without giving details.

The murders have been condemned by a human rights group.

‘We strongly condemn that massacre as a crime against humanity.’

A villager who told the Associated Press that he had been to the scene said the victims had fled the fighting between armed resistance groups and Myanmar’s army near the village of Koi Ngan, which is just beside Mo So, on Friday.

He said they were killed after they were arrested by troops while heading to refugee camps in the western part of the township.

A report in the state-run Myanma Alinn daily newspaper on Saturday said that the fighting broke out between members of ethnic guerrilla forces, known as the Karenni National Progressive Party and security forces.

The report said the violence began after those opposed to the military drove in ‘suspicious’ vehicles and attacked security forces after refusing to stop.

The witness who spoke to the AP said women’s and children’s clothing along with medical supplies and food had been found near the charred remains.

‘The bodies were tied with ropes before being set on fire,’ said the witness.

He did not see the moment they were killed, but said he believed some of them were Mo So villagers.

He denied that those captured were members of locally organised militia groups.

The witness said the villagers and anti-government militia groups left the bodies as military troops arrived near Mo So as the bodies were being prepared for cremation.

On Friday, Myanmar’s independent media reported that 10 Mo So villagers, including children, were arrested by the army.

Four members of the local paramilitary Border Guard Forces who went to negotiate for their release were reportedly tied up and shot by the military.

Earlier this month, government troops were also accused of rounding up villagers, some believed to be children, tying them up and slaughtering them.

An opposition leader, Dr Sasa, who uses only one name, said the civilians were burned alive.