Fox News Flash top headlines for May 21 are here. Check out what’s clicking on Foxnews.com

A dramatic scene unfolded in a South Carolina courtroom on Monday where a teary-eyed mother testified at the death penalty trial of her ex-husband, who is charged with killing their five children in a blind rage.

A prosecutor asked Amber Kyzer to read a letter she’d written their oldest child, trying to comfort her over the divorce and the pain of being in a broken home. 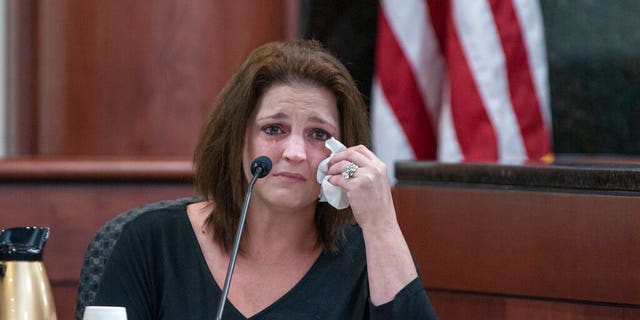 Amber Jones cries from the witness stand while being questioned by 11th Circuit deputy Solicitor Suzanne Mayes during the trial of her ex husband, Tim Jone.
(The State via AP)

"You kids are my world and Mommy and Daddy were really blessed to have you," Kyzer read on the witness stand while pausing and breaking into heaving sobs.

"Oh God. Oh God. My babies. My babies," Kyzer cried as the judge rushed to get the jury out of the courtroom.

Her ex-husband, Timothy Jones Jr., is on trial for his life. He showed no emotion in footage of the trial being streamed from the Lexington County Courthouse.

Jones, 37, is charged with five counts of murder. His lawyers are trying to have him found not guilty by reason of insanity.

Authorities said Jones wrapped their bodies in plastic and put them in his SUV, driving aimlessly around the Southeast U.S. before leaving their bodies on a hilltop. Jones was arrested at a Mississippi traffic checkpoint where an officer testified he recognized "the smell of death” coming from the car.

Kyzer said Jones was a good father while they were married, but he seemed to start having mental problems after they divorced.

Jones' lawyers said in their opening statement that Jones' mother has been in a mental institution for 20 years and he had undiagnosed schizophrenia. They said Jones' thin grasp on reality was broken by his ex-wife's infidelity, the difficulty of raising five young children on his own and a feeling he was failing to live up to his religious beliefs.