Hong Kong: Amateur video of violent demonstrations in Hong Kong on Tuesday captures the moment when a policeman points a pistol at a black-clad protester and fires a round, after which the young man falls to the floor.

The footage, taken by students during a chaotic melee in the Tsuen Wan area of the city, is the first known instance of a protester being shot with live ammunition during weeks of clashes between police and pro-democracy campaigners. 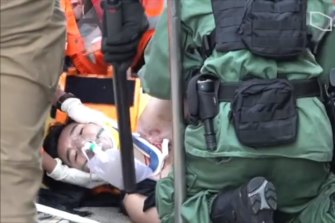 Police confirmed that an officer opened fire at a protester, saying he was acting in self-defence.

"A large group of rioters was attacking police officers in Tsuen Wan," police said in a statement.

"Police officers warned them, but they were still attacking police. A police officer's life was seriously endangered. In order to save his and other officers' lives, they fired at the attacker."

One clip posted on social media and verified by Reuters shows the protester, an as yet unnamed 18-year-old man, swing a baton or metal rod at a policeman's shooting arm, brushing his right arm.

The footage was taken by the City University Student Union, and showed a dozen black-clad protesters hurling objects at a group of police and closing in on the lone officer who pointed his gun and opened fire.

When the footage is slowed down, a white flash appears at the end of the pistol barrel pointing at the protester's chest from about a metre away. The protester stumbles over another policeman and falls on his back.

A second protester wearing a yellow construction hat rushes to the wounded man's aid before being tackled to the ground by police.

After lying motionless for several moments, the wounded protester removes his gas mask and calls weakly for help, giving his name and saying his chest hurts and that he needs to go to hospital. A policeman then kneels beside him and begins to tend to his wound.

The man was taken to Queen Elizabeth Hospital, and was undergoing surgery early on Wednesday morning.

A source told the South China Morning Post that the bullet had hit the man's lung, but did not cause any vascular injury. His condition had stabilised, and he was expected to survive, the source said.

Protesters have been hit before with bean bags and rubber bullets and officers have fired live rounds in the air.

The incident came as thousands of protesters, some wearing Guy Fawkes masks, took to the streets to defy the city's Chinese rulers on the 70th anniversary of the founding of the People's Republic.

"Whilst there is no excuse for violence, the use of live ammunition is disproportionate, and only risks inflaming the situation," UK Foreign Secretary Dominic Raab said of the protests in the former British colony that returned to Chinese rule in 1997.

Riot police fired tear gas in at least six locations and used water cannons in the business district as usually bustling streets became battlefields. Hundreds of protesters sprinted into a Methodist church for refuge as officers firing volleys of choking gas swept through streets near police headquarters. A clergyman at the door clutched a bottle of water to wash out stinging eyes.

Determined to thumb their noses at Chinese President Xi Jinping, protesters ignored a security clampdown that saw more than two dozen subway stations closed, with some trekking for kilometres in the tropical heat and humidity to join a massive march in the city centre.

Chanting anti-China slogans and "Freedom for Hong Kong," the dense crowd dressed in mournful black snaked for over 1.6 kilometres along a broad thoroughfare in defiance of a police ban. Some carried Chinese flags defaced with a black cross. Organisers said at least 100,000 people marched. Police didn't give an estimate.

"They are squeezing our necks so we don't breathe the air of freedom," said King Chan, a 57-year-old homemaker who marched with her husband.

Demonstrators tossed wads of fake bank notes usually used at funerals into the air. "The leaders who won't listen to our voice, this is for them," said marcher Ray Luk.

Thousands confronted police across the city, the largest number of simultaneous protests since the unrest began in early June over a now-shelved extradition bill that activists say was an example of how Hong Kong's freedoms and citizen rights are being eroded. The movement has since grown into an anti-Chinese campaign with demands for direct elections for the city's leaders and police accountability.