‘The extremes people go to for a PINT!’: Moment desperate drinkers enjoy a few post-lockdown beers while shielding from the ‘p***ing rain’ under three umbrellas outside Glasgow pub

Determined pub-goers used umbrellas to build a creative makeshift shelter as they enjoyed their first outdoor pints in months after Scotland’s lockdown restrictions eased this week.

The image, taken yesterday, shows the four Scottish men huddling around three umbrellas as they desperately tried to enjoy their outdoor pints at the Tolbooth Bar, Glasgow.

But Jojo Keenan, who runs the popular Irish pub, explained in a post online that the Tolbooth was only open for ‘a couple of hours to check everything is up and running’.

Punters across Scotland have braved the elements this week as they returned to their favourite venues after hospitality and non-essential retail were allowed to reopen under new guidelines on Monday.

The snap, taken outside while temperatures were as low as 8C, has left social media users in fits of laughter. 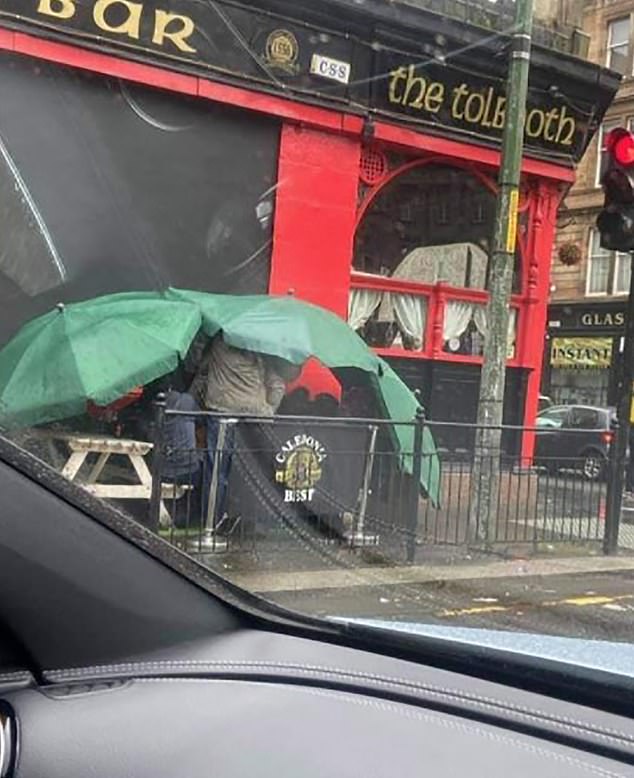 Thousands of social media users have shared the image of four men cramming under an umbrella (above) to enjoy post-lockdown pints at the Tolbooth Bar, Glasgow 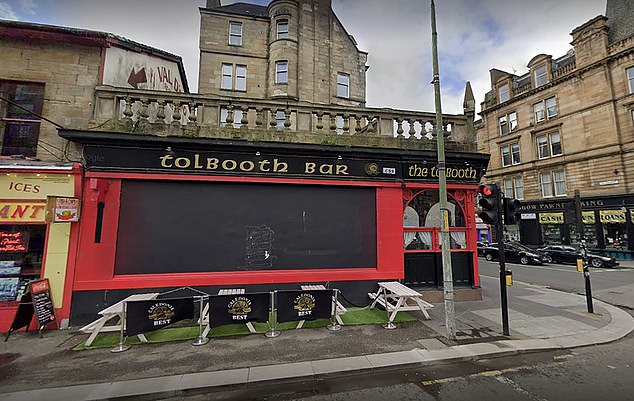 Jojo Keenan, who runs the Tolbooth Bar (above), explained that the popular Irish pub was only open for ‘a couple of hours to check everything was up and running’

The local driver who captured the image described his shock at seeing the punters braving the elements for a drink.

‘I just found it amusing that people would go to those extremes for a pint.’

Despite the wet weather, plenty of Scots have enjoyed their first pints in months since the country went into lockdown on December 26.

On Monday, Holyrood’s leaders downgraded the country’s Covid-19 restrictions from Level 4 to Level 3. 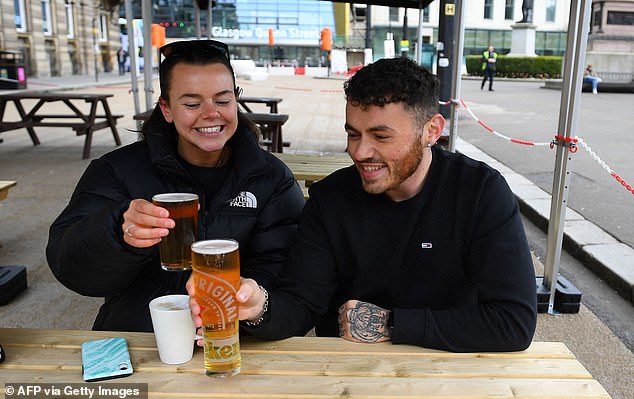 People sit at outside tables to drink at a re-opened Wetherspoons pub in Glasgow on April 26, 2021 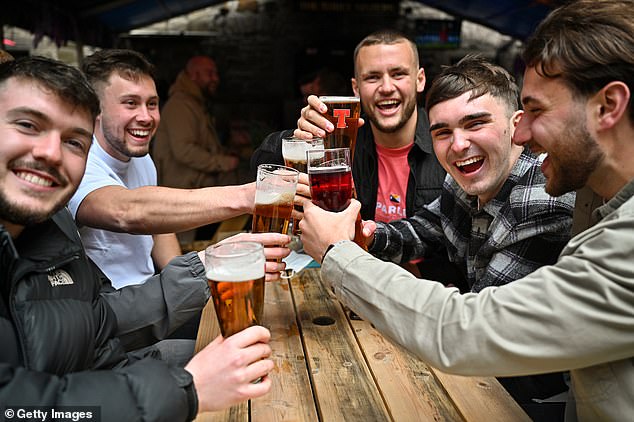 Hundreds of social media users have commented on the viral image after being left in stitches at the group’s antics.

@Littleguyfaux said: ‘Oh Christ is there anything more Glaswegian than this?’

@hughclarke1 commented: ‘Lol. I got stopped at those lights today and burst oot laughing at all the auld codgers drinking under umbrellas.’

Hundreds of social media users, including @hughclarke1 (above), have commented on the image after being left in stitches at the group’s antics

@callery_gerry added: ‘Passed them today, made me laugh. Determined tae stay there.’

However, some Twitter users called out the punters for sitting too close, arguing there was a lack of social distancing going on under the umbrellas.

Scotland began to ease out of a four month long lockdown on Monday with pubs being allowed to sell alcohol outside until late evening.

Gyms, shops, cafes and restaurants also reopened, while the cap on the amount of people attending funerals was raised to 50.

From May 17, hospitality businesses will be able to sell alcohol indoors until 10.30pm.

Outdoor contact sports and indoor group exercise will also be able to resume from then, as well as up to four people from two households being eligible to mix inside.

The roadmap out of lockdown in the four home nations: Where are they now, and what’s coming next?

What’s coming next? May 17 will see easing of international travel restrictions as well as the return of indoor mixing. On June 21, all legal limits on social distancing will be axed.

What’s coming next? – From May 17, cinemas will reopen and four people from two households can meet indoors.

Latest lockdown easing – From April 26, outdoor hospitality was given the green light to resume trading.

What’s coming next? – Indoor mixing will be allowed from May 10.

What’s coming next? –  Northern Ireland does not have a roadmap in the same way as other nations, but gyms, non-essential shops and pubs are expected to reopen for customers on Friday, April 30.