Tesla driver, 20, is found ASLEEP at the wheel of his self-driving car speeding at 93mph down a highway in Canada

A Tesla driver has been charged after being found asleep at the wheel of his self-driving car speeding along at 93mph in Canada.

The man’s Model S Tesla was pictured with its seats fully reclined while roaring along near the town of Ponoka, about 60 miles south of Edmonton in Alberta.

When cops discovered the car traveling at about 86mph, they turned on their emergency flashing lights – only for the Tesla to ‘automatically begin to accelerate’ to  93mph. The speed limit on that stretch of highway is about 68mph.

The driver, 20, from British Colombia, was charged with speeding and given a 24-hour license suspension for fatigue. 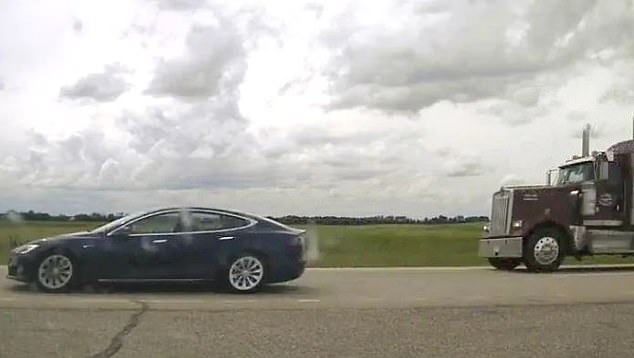 He was later also charged with dangerous driving and he was served a summons to appear in court in December.

RCMP Sgt. Darrin Turnbull told CBC News: ‘Nobody was looking out the windshield to see where the car was going. I’ve been in policing for over 23 years and the majority of that in traffic law enforcement, and I’m speechless.

‘I’ve never, ever seen anything like this before, but of course the technology wasn’t there.’

Tesla Model S sedans have autopilot functions which includes auto-steer as well as ‘traffic-aware’ cruise control. In this case both functions appeared to be in use..

Turnball added: ‘We believe the vehicle was operating on the autopilot system, which is really just an advanced driver safety system, a driver assist program. You still need to be driving the vehicle.

‘But of course, there are after-market things that can be done to a vehicle against the manufacturer’s recommendations to change or circumvent the safety system.’