Going for a spin! Driver loses control on the M25 when their BMW aquaplanes in heavy rain and careers across four lanes of traffic – but avoids hitting any other vehicles

This is the shocking moment a BMW 3 Series driver lost control of his car while driving down the fast lane of the M25 during a heavy rain shower and miraculously avoids causing a major pile up.

The driver, who was travelling considerably quicker than all other vehicles on the anti-clockwise stretch of the M25 approaching the M11 in Essex, lost control after hitting standing water which had built up against a concrete barrier separating the opposing carriageways.

In footage which was filmed on a dashcam, the BMW driver can be seen braking heavily and aquaplaning, losing the rear of his car which slams into the concrete barrier. 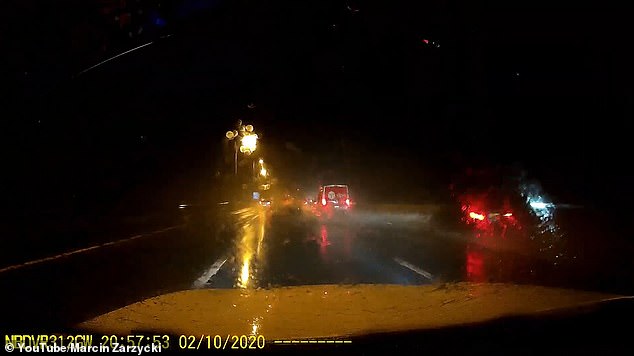 The BMW, pictured right, can be seen passing other vehicles on the M25 in Essex 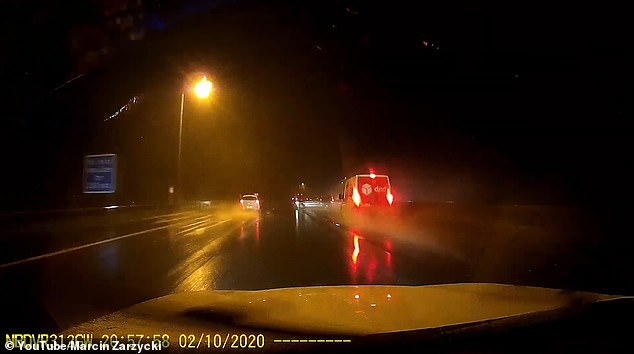 Here, the DPD courier can be seen heavily braking as the BMW passes sideways in front of it after striking the concrete central reservation having lost control in the poor conditions 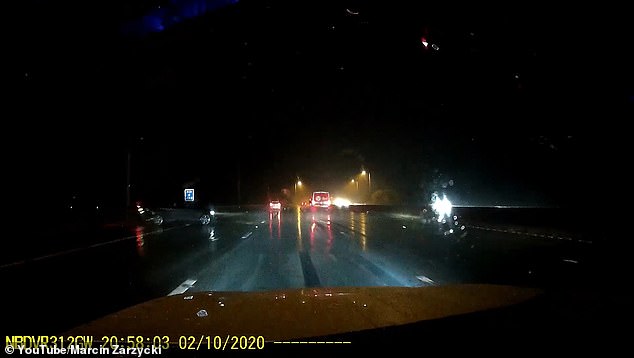 Moments later, the BMW can be seen left, rolling to a halt on the nearside lane having struck the crash barrier at the edge of the hard shoulder

The car spins left across the carriageway narrowly avoiding a DPD courier who is driving along the centre lane and continues towards the hard shoulder, careering into the metal crash barrier and rolling to a stop on the nearside lane.

The incident happened on October 2 shortly before 9pm near Stapleford Tawney in Essex.

Luckily, several cars were able to avoid the BMW, which was completely out of control as it crossed several lanes of traffic.

Weather conditions at the time of the incident were horrendous, with heavy rain and a great deal of spray from the road.