After throwing open its doors as a pandemic-era party haven for a host of glamorous influencers and reality stars, Dubai is refusing to stop the revelry even as it faces its worst-ever surge in coronavirus cases.

As Britain endures a grinding winter lockdown, life in the tourism-reliant emirate looks much like normal, with its restaurants, hotels and cavernous shopping malls all open for business and raucous yacht parties in full swing.

While many countries banned UK tourists because of the alarming new strain of the virus, the UAE kept its doors open with Emirates flying five times a day between Heathrow and Dubai over the holidays.

The new strain had arrived within days, but that did not stop British visitors from fleeing the UK for Dubai’s bars and beaches – without taking a virus test before boarding.

A string of reality stars have headed for the Middle East sunshine in recent months, some arguing that their trips are necessary for work, while British footballers have also caused controversy by holding training camps in the UAE.

But reality is catching up to the big-dreaming city, with virus infections nearly trebling in the last month to reach unprecedented heights – forcing Britain to slam shut its travel corridor last week.

Built on the promise of globalisation, Dubai’s economy depends on the aviation, hospitality and retail sectors – all hard hit by the virus – and the city is continuing to hold out against lockdown.

‘Dubai’s economy is a house of cards,’ said Matthew Page, a scholar at the Carnegie Endowment for International Peace. ‘Its competitive advantage is being a place where rules don’t apply.’ 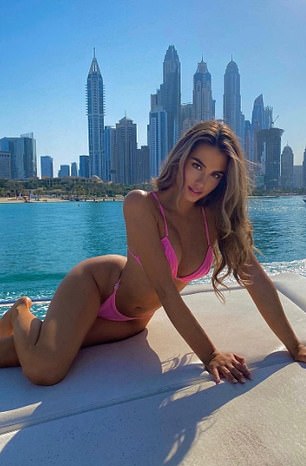 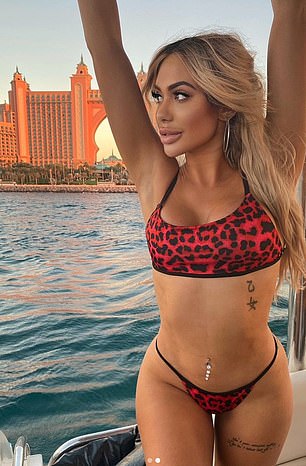 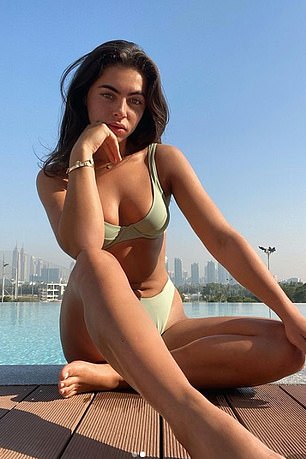 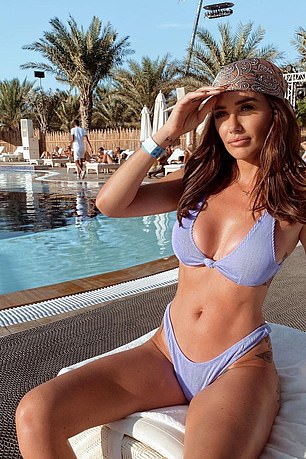 Love Island stars Francesca Allen (left) and Laura Anderson (right) were also among those to head to Dubai, where a travel corridor to the UK was still open until last week

Fellow Love Island star Arabella Chi said she was travelling to Dubai because she had a photoshoot booked and meetings arranged with modelling agencies in the city.

Amid a backlash from locked-down Britons who long to go on holiday again, Anderson insisted that ‘this is what I do for a job at the minute’.

‘I saw someone in my comments saying you’re on holiday, but when you’re working you’re not on holiday,’ she said.

Meanwhile, Celtic FC faced scrutiny from the Scottish government for travelling to the UAE for a warm-weather training camp which ended in two players testing positive.

Scotland’s first minister Nicola Sturgeon questioned whether the trip was essential and revealed doubts ‘based on some pictures I’ve seen whether adherence to bubble rules was strict enough’.

But Celtic manager Neil Lennon hit back at claims that the trip was a ‘jolly’, saying it was not a ‘stag do’ and that the players ‘went out there with the best intentions’.

Dubai’s economy was glad of the December influx, with hotel occupancy rates surging to 71 per cent last month, according to data provider STR.

The London-Dubai air route ranked the busiest in the world over the first week of January, said OAG, an aviation data analysis firm. 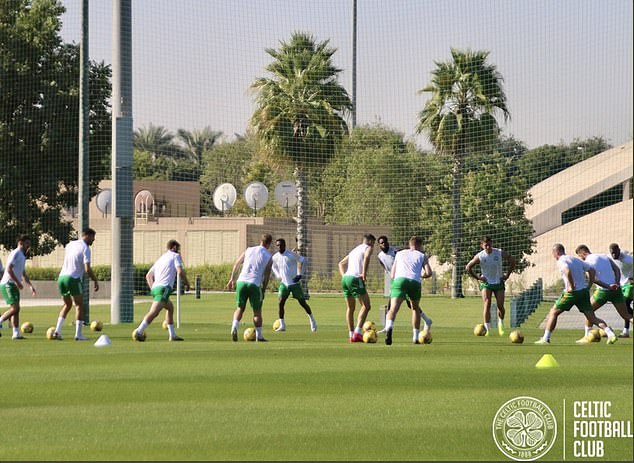 Celtic players fled Glasgow for a warm-weather training camp in Dubai, leading to scrutiny from the Scottish government 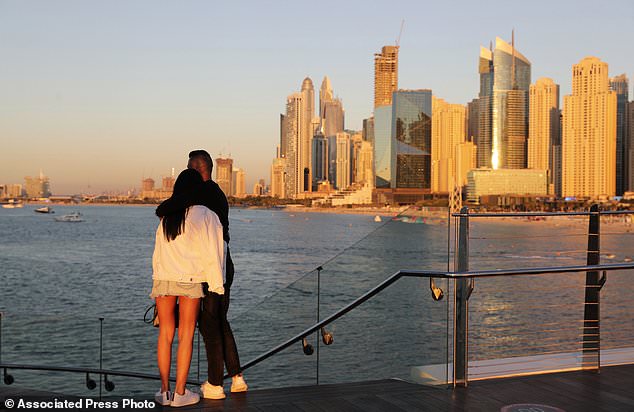 Tourists look at the skyline at sunset in Dubai last week, as the big-dreaming city continues to hold out against lockdown despite a surge in coronavirus cases

‘People have had enough of this pandemic already,’ said Iris Sabellano from Dubai’s Al Arabi Travel Agency, adding that many of her clients have been forced to quarantine after testing positive for the virus on arrival or before departure.

Travellers coming from a select list of countries do not need tests before their trips, but everyone must at Dubai’s airport.

‘With vaccines coming out, they feel it’s not the end of the world, they’re not going to die,’ she said.

For those who do die of Covid-19, Emirates Airlines even offers to pay $1,800 to help cover funeral costs.

But as the outbreak worsens, it seems the stampede will slow. Israeli tourists, who were coming in the tens of thousands following a normalisation deal between the countries, have vanished due to new quarantine rules.

A decision to suspend visa waivers for Israelis to the UAE until July took effect on Monday. Britain’s move to impose a 10-day quarantine for those returning from Dubai threatens to clobber what is left of the tourism sector.

‘Brits make up such an important proportion of tourists and investors in Dubai,’ said David Tarsh, spokesman for ForwardKeys, a travel data-analysis company. ‘Cutting that pipeline… is a complete disaster for the city.’

Beyond daily infections, however, the data is scant. The UAE does not make public information about disease clusters or hospitalizations.

Amid an aggressive testing campaign, the country has reported more than 256,000 cases and 751 deaths.

But that has not assuaged Abu Dhabi, Dubai’s more conservative neighbor and the country’s capital.

Without explanation, Abu Dhabi has kept its border with freewheeling Dubai shut, despite promises to reopen by Christmas. Anyone crossing into Abu Dhabi must present a negative coronavirus test.

Relations between service-heavy Dubai and oil-rich Abu Dhabi can get tense. During the 2009 financial crisis, Abu Dhabi needed to rescue Dubai with a $20 billion bailout.

This time, it is not clear whether Dubai can count on another cash infusion, given the crash in global oil prices. 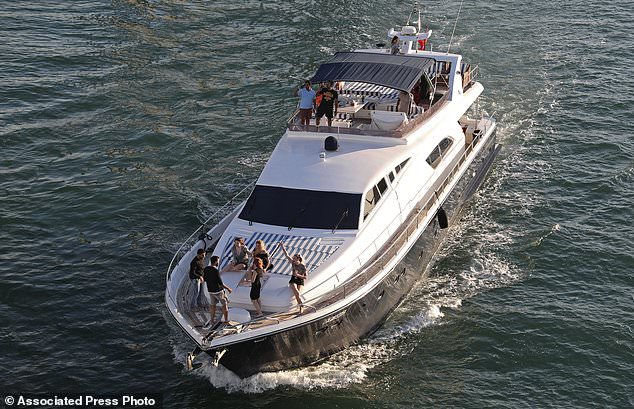 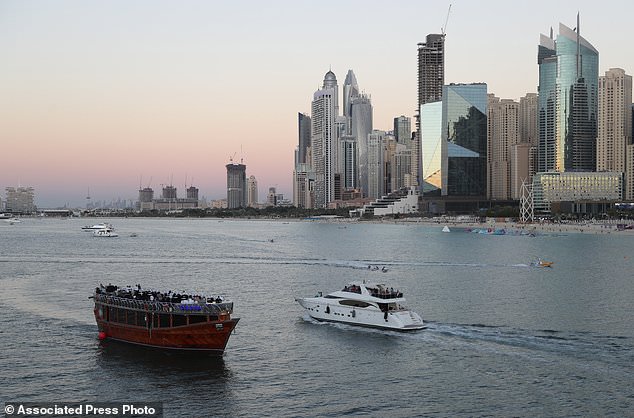 Even pre-pandemic, Dubai’s economy was heading toward another downturn thanks to a shaky real estate market, which has plunged 30 per cent in value since 2014.

The emirate and its web of government-linked entities also face billions of dollars in debt repayments. Already the government has stepped in to help Emirates Airlines, which received $2billion in aid last year.

Other indebted firms invested in hospitality and tourism may need help, especially with events like the 2020 World Expo pushed back a year.

S&P Global, a ratings agency, estimates Dubai’s debt burden to be some 148 per cent of gross domestic product if state-linked industries are included.

Under pressure, authorities have seized on vaccines as the only way to contain the outbreak.

Plastered across front pages of state-linked newspapers are stories touting the mass inoculation drive, which officials claim to be the world´s second-fastest after Israel, with 19 doses distributed for every 100 people as of Tuesday.

The UAE is offering the Chinese coronavirus vaccine Sinopharm to everyone, even as its announcement about the shot’s efficacy lacks data and details.

Demand has overwhelmed supply for the Pfizer-BioNTech vaccine in Dubai, where hotline operators say thousands of high-risk residents remain on a waiting list.

But even if Dubai meets its goal of inoculating 70 per cent of the population by the end of 2021, Moody´s Investors Service expects the UAE’s economy to take three years to bounce back.

‘I don’t think Dubai’s days are numbered,’ said Page, the Carnegie scholar. ‘But if the city were more modest and responsible, it would be a more sustainable place.’