Philippine president lists measures to revive economy amid pandemic but veers towards war on drugs and death penalty. 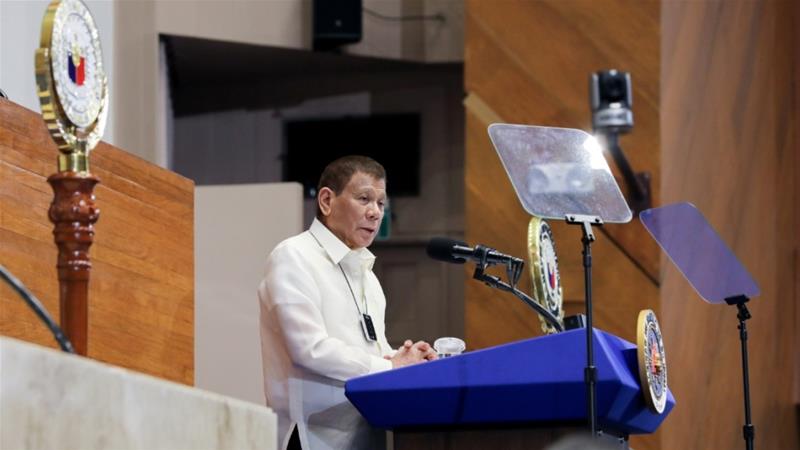 Philippine President Rodrigo Duterte has defended his government’s response to the coronavirus pandemic, saying the measures introduced have prevented millions of infections.

Speaking during his annual address to the nation on Monday, and as the confirmed COVID-19 cases grew to 82,040 including nearly 2,000 deaths, Duterte said the country’s lengthy and strict lockdown may have hurt the economy but had kept transmissions at bay.

The Philippines eased restrictions on June 1, but infections have since quadrupled and critics say the country was too slow in detecting cases due to weak testing, which Duterte acknowledged it had started slowly.

“To me, even if the numbers were much lower, it would still be and would have been worth the sacrifice we made,” he said of the measures he took, including a declaration of a national health emergency and the imposition of the lockdown.

“Life first before everything,” he said, adding “we initially encountered difficulties ramping up our testing capacity”.

Duterte said the government’s intervention prevented as many as 1.3 million to 3.5 million infections but did not explain how he came up with the figures.

The president also reiterated that he would not allow schools to reopen for face-to-face classes until a vaccine was available, which he claimed could be as early as September.

He said he has asked Chinese President Xi Jinping to make the Philippines a top priority once Beijing had developed its own vaccine for COVID-19.

“I made a plea to President Xi if they have the vaccine can they allow us to be one of the first … so that we can normalise as fast as possible,” he said.

The president also enumerated a slew of economic measures, including providing interest-free loans to small businesses as well as a stimulus package to help informal workers.

Despite a reported 17.5 percent unemployment rate during the pandemic, and the possibility of a 35-year-low economic recession, he said international ratings agencies such as Moody’s have maintained their positive outlook for the Philippine economy.

Duterte also promised no relent in a bloody war on drugs that has alarmed the international community, even as he promised that the Philippines “will not dodge our obligation” to human rights, adding, that included protecting people from drugs and corruption.

“Do not do it in my country because I will really kill you that is a commitment,” he said, warning drug dealers while urging Congress to pass the death penalty through lethal injection against the drug trade.

He also threatened the closure or government expropriation of telecoms firms for what he called “lousy” services, and gave providers until December to improve.

Duterte, however, did not mention his plan to push for an amendment in the constitution, spending instead a considerable amount of time against his critics.

At times, the president struggled to read the text of his speech, complaining that his eyesight has been deteriorating.

Throughout his almost two-hour speech, he repeatedly veered off his prepared speech as he ranted against his critics, singling out a veteran senator, who is a member of the opposition, for his call to dismantle the country’s oligarchy and political dynasties – including that of the president’s family, as all three of his grown-up children hold elective positions in their hometown of Davao.