This Morning host Eamonn Holmes has been branded “irresponsible” for saying it it suits the ‘state narrative’ to dismiss bizarre theories linking the 5G network to the spread of the coronavirus.

He spoke out on the ITV show after presenter Alice Beer branded the conspiracy theories which link them as “ridiculous” and “incredibly stupid”.

Holmes, 60, who was co-presenting with wife Ruth Langsford, responded that “it’s very easy to say it is not true because it suits the state narrative”. 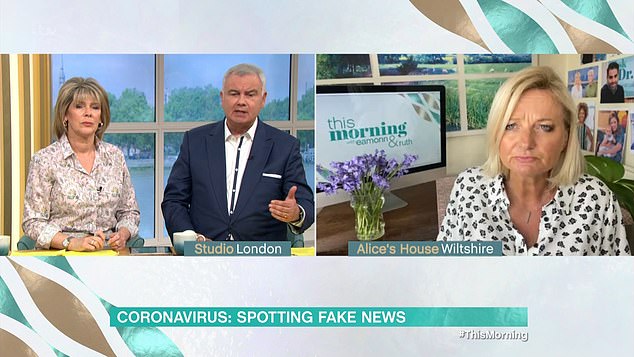 He told Beer: ‘I totally agree with everything you are saying but what I don’t accept is mainstream media immediately slapping that down as not true when they don’t know it’s not true.

‘No-one should attack or damage or do anything like that but it’s very easy to say it is not true because it suits the state narrative.’

The presenter added: ‘That’s all I would say, as someone with an inquiring mind.’

His made the remarks after scientists dismissed any link, calling it a ‘physical and biological impossibility’ and branding conspiracy theorists ‘a public health danger”.

Viewers criticised the presenter’s comments and accused him of ‘legitimising’ the conspiracy theories. 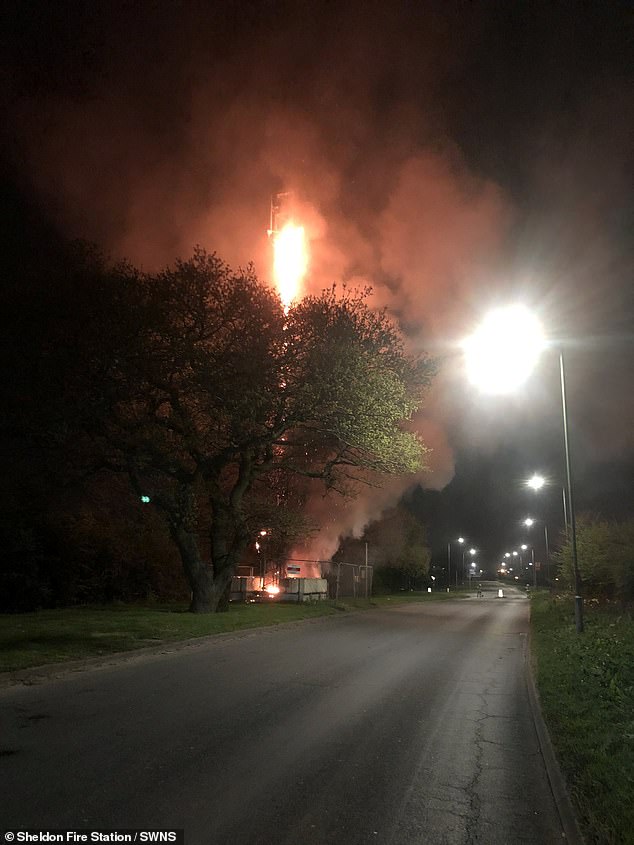 Firefighters were called out to a mast which caught fire in the early hours of Friday, April 10 in Chelmsley Wood, Birmingham

@vickster51 wrote: ‘So I’ve just heard This Morning presenter Eamonn Holmes legitimise the stories linking the coronavirus lockdown to 5G. On national television. Wow. How irresponsible can you get. Switching off. Hope Holly and Phil are back soon.’

Andy Green wrote: ‘Well done Eamonn. You just added more fuel to this 5G conspiracy theory by legitimising what is utter nonsense. You need to research properly before pronouncing.’

MPs have called for social media companies to be held to account following reports of phone masts being attacked after theories spread online.

And Ofcom is assessing comments made by David Icke about coronavirus.

The media watchdog previously ruled that a local radio station had breached its rules after one of its guests suggested the Covid-19 outbreak was caused by the rollout of 5G mobile technology.

Earlier this month a mast in Birmingham caught alight in what was thought to be a 5G conspiracy-related arson attack.

WHAT IS 5G AND WHAT DOES IT DO?

The evolution of the G system started in 1980 with the invention of the mobile phone which allowed for analogue data to be transmitted via phone calls.

Digital came into play in 1991 with 2G and SMS and MMS capabilities were launched.

Since then, the capabilities and carrying capacity for the mobile network has increased massively.

More data can be transferred from one point to another via the mobile network quicker than ever.

5G is expected to be 100 times faster than the currently used 4G.

Whilst the jump from 3G to 4G was most beneficial for mobile browsing and working, the step to 5G will be so fast they become almost real-time.

That means mobile operations will be just as fast as office-based internet connections.

Potential uses for 5g include:

5G is expected to be so quick and efficient it is possible it could start the end of wired connections.

By the end of 2020, industry estimates claim 50 billion devices will be connected to 5G.

The evolution of from 1G to 5G. The predicted speed of 5G is more than 1Gbps – 1,000 times greater than the existing speed of 4G and could be implemented in laptops of the future