The easyJet flight from London Gatwick to Gibraltar declared an emergency yesterday evening and was forced to divert to Bordeaux, France.

According to the Gibraltar Broadcasting Corporation, two individuals were allegedly aggressive to those onboard.

Footage has now emerged showing the moment police boarded the plane in France.

They can be seen taking one man from his seat – to the joy of those watching.

Cheers erupt from the passengers with some saying “au revoir” as the couple are marched off.

Emma-Claire Wilson, who flew from Gibraltar back to the UK on the same plane, told Mirror Online: “Once the flight landed, passengers were vocal when coming off the plane past us.

“The staff on the flight were very honest with us when we got on board and informed us all fully that the couple were disembarked in France due to aggression and violence towards the crew which made the flight unsafe to continue.”

An easyJet spokesman said they were forced to divert to Bordeaux for the safety of the flight. 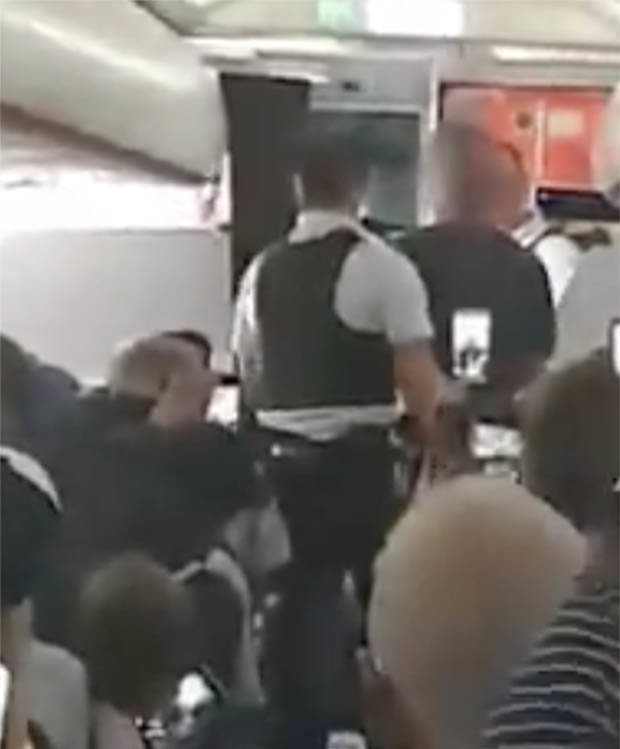 “We can confirm that flight EZY8905 from London Gatwick to Gibraltar was required to divert to Bordeaux and met by police as a result of two passengers behaving disruptively,” they said.

“The safety and wellbeing of our passengers and crew is always our highest priority.

“Our cabin crew are trained to assess all situations and to act quickly and appropriately to ensure that the safety of the flight and other passengers is not compromised at any time.

“Whilst such incidents are rare, we take them very seriously and do not tolerate abusive or threatening behaviour towards our staff.”