QUITO (Reuters) – Ecuadorean protesters halted transport and barricaded streets for a second day on Friday as 350 people were jailed over unrest triggered by President Lenin Moreno’s scrapping of fuel subsidies. 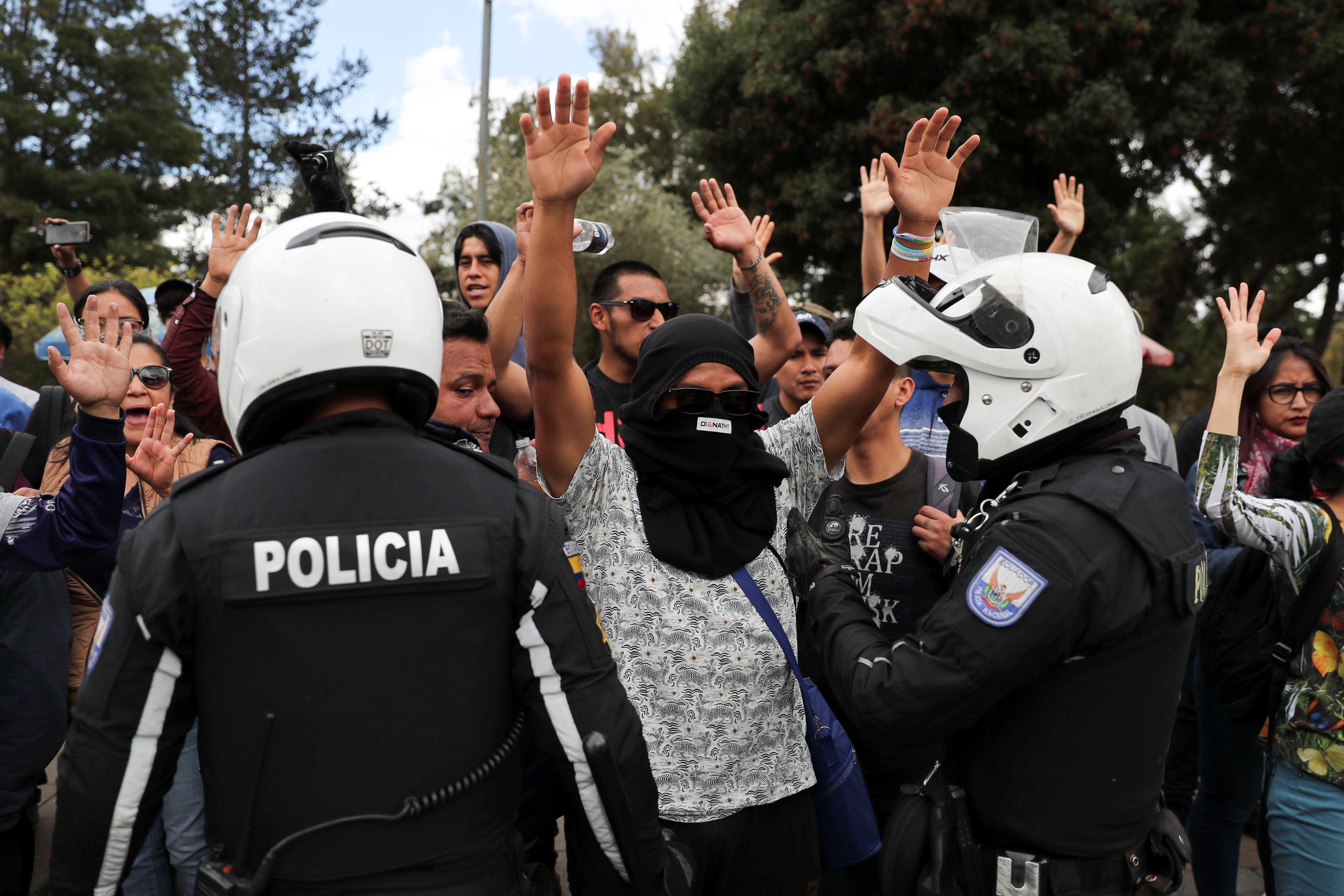 The 66-year-old president has set oil producer Ecuador on a centrist path after years of leftist rule under Rafael Correa and is implementing a belt-tightening fiscal package to conform with a $4.2 billion International Monetary Fund (IMF) deal.

But his elimination of the decades-old fuel subsidies has incensed many Ecuadoreans and brought violent protests back to a nation with a history of political volatility.

From the highland capital Quito to the coastal city of Guayaquil, many bus and taxi services were halted, while demonstrators blocked roads with tires, stones and branches, albeit it in lesser numbers than the previous day.

On Thursday, the day fuel prices rose, masked protesters hurled stones, set up burning blockades and battled police who deployed armored cars and tear gas during the worst unrest for years in the country of 17 million people.

Transport unions have led the protests, joined by indigenous groups, students and other unions.

Moreno’s popularity has sunk to below 30% compared with above 70% after his 2017 election, but his political position appears firm given support from the business elite, military loyalty, and the lack of a strong opposition.

However, Ecuadoreans are mindful that protests toppled three presidents during economic turmoil in the decade before Correa took power in 2007.

Moreno, who uses a wheelchair after a 1998 shooting during a robbery left him paraplegic, has declared a 60-day state of emergency across Ecuador. Rings of soldiers and police guarded the presidential palace in downtown Quito, where another march was planned for later on Friday.

By Friday morning, 350 people had been arrested, mainly in Quito and Guayaquil, the Interior Ministry said. Looting was reported in Guayaquil.

Truck drivers’ leader Luis Vizcaino called for dialogue with the government. “All Ecuador’s transport sectors are in crisis … We have to reach a halfway measure,” he said. Taxi union leader Jorge Calderon was among those detained.

Moreno said he was open to talks but there was no possibility of restoring fuel subsidies that he said had damaged the economy and cost state coffers $60 billion over the years.

“There will be mechanisms to ease the impact on some sectors,” he said. “But listen clearly: I am not going to change the measure, the subsidy is finished, no more loafing.”

Ecuador hopes to save about $1.5 billion a year from ending fuel subsidies. Along with tax reforms, the government would benefit by about $2.27 billion.

The government has also been laying off some state workers.

It wants to reduce the fiscal deficit from an estimated $3.6 billion this year to under $1 billion in 2020.

Ecuador also plans to leave the Organization of the Petroleum Exporting Countries (OPEC) in 2020 to pump more oil and raise revenue.

National debt grew under Correa, who endorsed Moreno in 2017 but now calls him a “traitor.”

Moreno’s government has improved relations with the West and reached its three-year, $4.2 billion loan deal with the IMF in February, dependent on “structural measures” including raising tax revenue and bolstering central bank independence.

The deal allowed Ecuador to receive an immediate disbursement of $652 million and paved the way for an additional $6 billion in loans from other multilateral institutions. 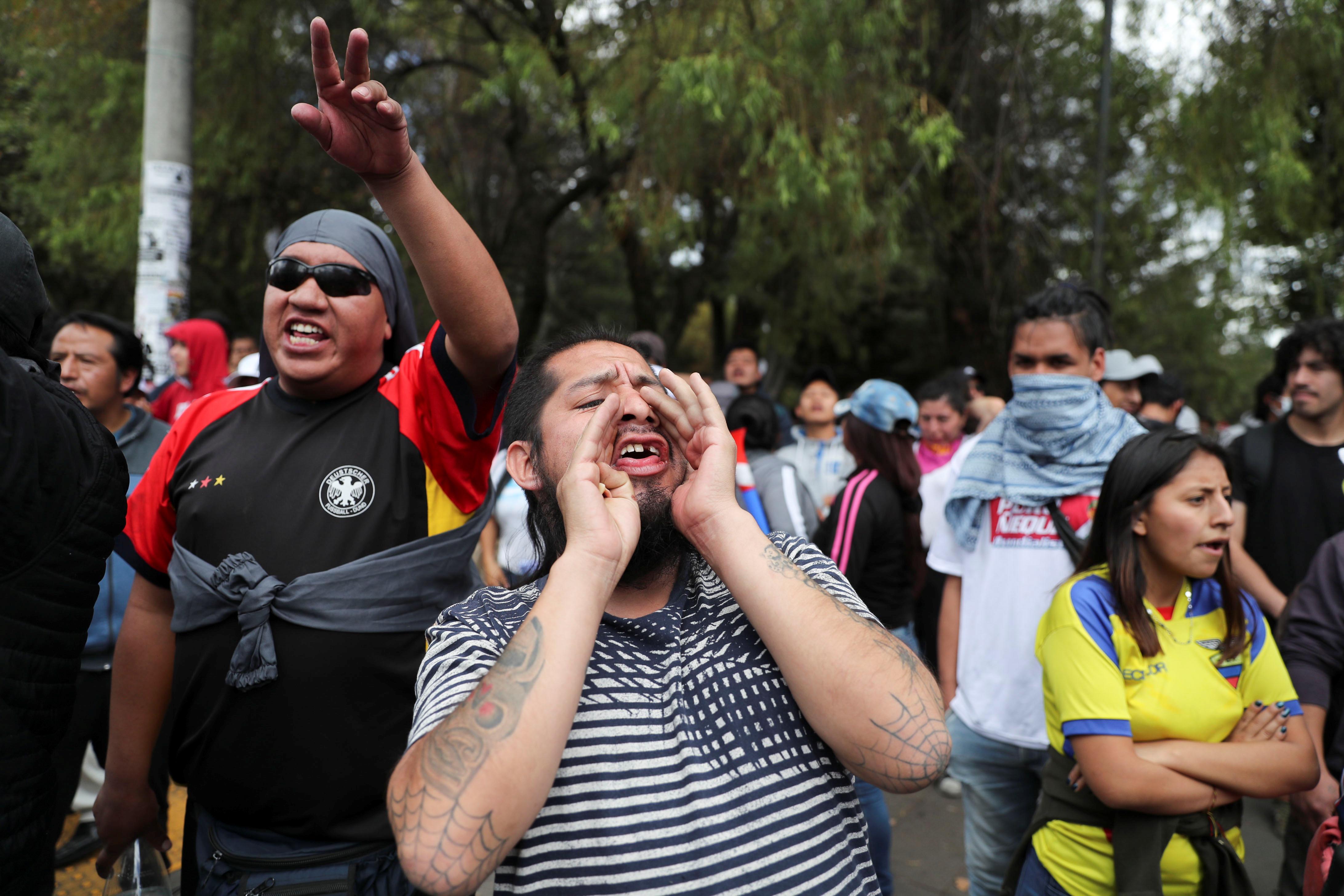 But skepticism of the IMF runs strong throughout Latin America, where many blame its conditions for personal hardships.

Shopkeepers lamented the disruption to business from the protests, while prices were creeping up in markets.

“Potatoes and onions are more expensive. The authorities need to sort this out, people are taking advantage of the situation,” said housewife Matilde Ordoñez, 43, in Guayaquil.