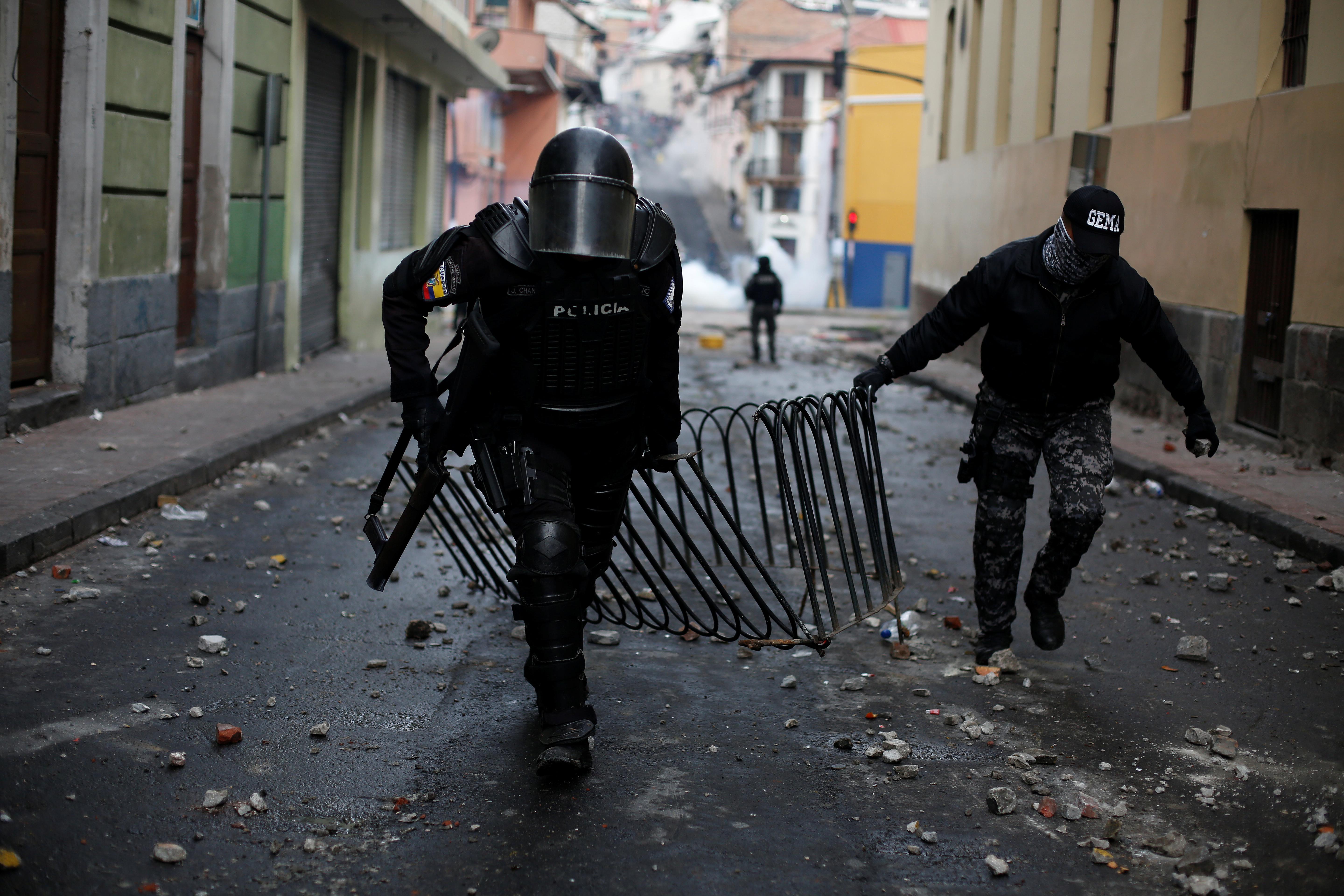 The 66-year-old president has set oil producer Ecuador on a centrist path after years of leftist rule under Rafael Correa and is implementing austerity measures to conform with a three-year $4.2 billion International Monetary Fund (IMF) deal.

But Moreno’s scrapping of decades-old fuel subsidies this week incensed many Ecuadoreans and brought violent protests in a nation with a history of political volatility.

Witnesses said bus and taxi services remained on strike on Friday from the capital Quito to the coastal city of Guayaquil. In Quito, taxis parked across some streets to block traffic.

As fuel prices soared from Thursday, masked protesters hurled stones and set up burning barricades in the worst unrest for years in the country of 17 million people.

In Quito, smoldering tyres and rocks littered streets on Friday morning, while lamp-posts were bent and broken.

Transport unions began the protests, but have been joined by indigenous groups, students and other unions.

Moreno’s popularity has fallen more than half from above 60% after his 2017 election, but his political position remains firm given widespread support from the business elite, military loyalty, and the lack of a strong opposition.

However, Ecuadoreans will be mindful that street protests toppled three presidents during economic turmoil in the decade before the socialist Correa took power in 2007.

Moreno declared a 60-day state of emergency on Thursday, saying disorder would not be tolerated. By Friday morning, 350 people were arrested, mainly in Quito and Guayaquil, the Interior Ministry said. Taxi union leader Jorge Calderon was among those detained on Friday.

Some 28 police officers were hurt on Thursday, the ministry added, as they deployed armored vehicles and tear gas.

Diesel prices rose from $1.03 to $2.30 per gallon on Thursday, while gasoline rose from $1.85 to $2.39. The army said its vehicles would provide public transport services.

Truck drivers’ leader Luis Vizcaino called for dialogue with the government. “All Ecuador’s transport sectors are in crisis … we have to reach a halfway measure,” he said.

Officials say the elimination of fuel subsidies was necessary to lift a struggling economy and stop smuggling.

“I have the courage to make the right decisions for the nation,” Moreno told reporters, praising the security services for quelling violence.

Rings of soldiers and police prevented protesters from reaching his palace in Quito on Thursday evening, but authorities were unable to stop some looting in Guayaquil.

Ecuador hopes to save about $1.5 billion a year from eliminating fuel subsidies. Along with tax reforms, the government would benefit by about $2.27 billion.

Ecuador has also begun laying off some state workers and is leaving the Organization of the Petroleum Exporting Countries (OPEC) to pump more oil and raise revenue.

Ecuador’s debt grew under Correa, who endorsed Moreno in 2017 but has become a critic of his successor’s turn toward more market-friendly policies.

The government wants to reduce the fiscal deficit from an estimated $3.6 billion this year to under $1 billion in 2020.

Moreno’s government has improved relations with the West and reached its $4.2 billion loan deal with the IMF in February, dependent on “structural” changes including raising tax revenue and bolstering Central Bank independence.

The deal allowed Ecuador to receive an immediate disbursement of $652 million and paved the way for an additional $6 billion in loans from other multilateral institutions.

Skepticism of the IMF runs strong in Ecuador and throughout Latin America, where many blame austerity policies for personal hardships.