Ecuador’s president and indigenous leaders reached an agreement yesterday to end nearly two weeks of violent protests against austerity measures adopted to obtain a multi-billion-dollar loan from the IMF.

The demonstrations have left seven people dead and were sparked when President Lenin Moreno scrapped fuel subsidies to obtain a $4.2 billion loan from the International Monetary Fund, causing prices to double.

Moreno met with Jaime Vargas, the head of the indigenous umbrella grouping CONAIE, for four hours of talks in the capital Quito broadcast live on state television.

‘With this agreement, the mobilisations… across Ecuador are terminated and we commit ourselves to restoring peace in the country,’ said a joint statement, adding the government had withdrawn an order that removed fuel subsidies. 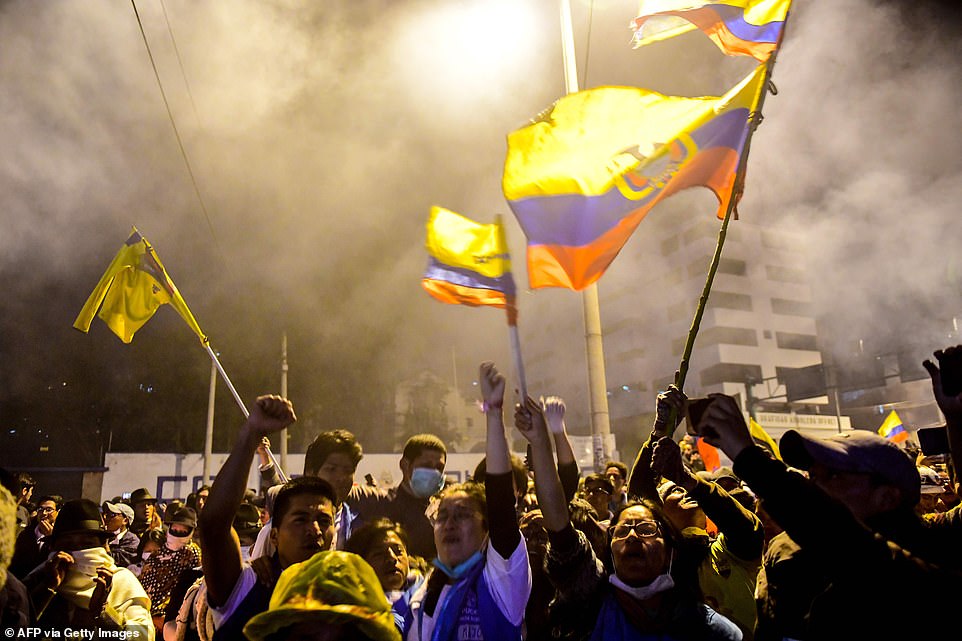 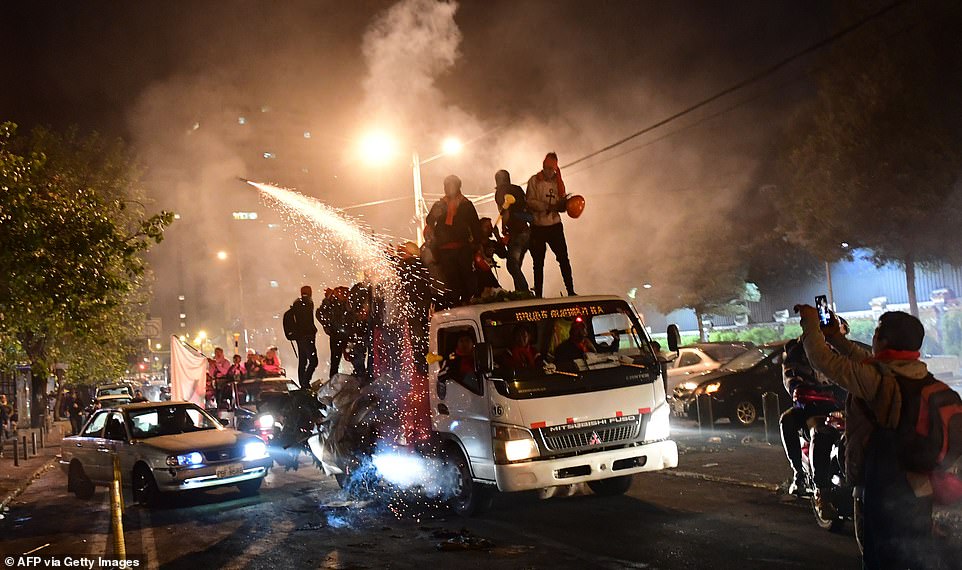 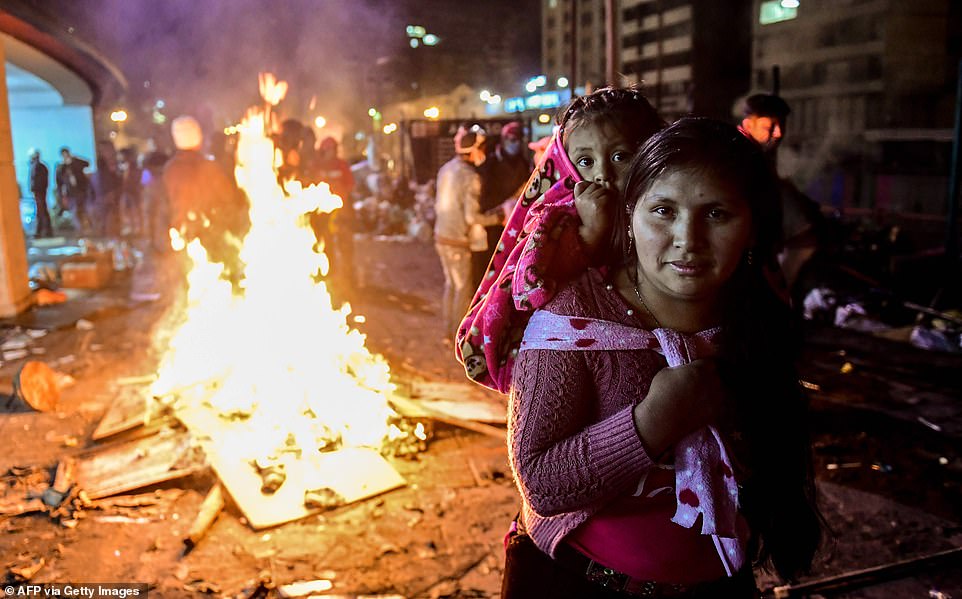 Thousands flooded into the streets of Quito shortly after the announcement, waving the national flag, honking horns and setting off fireworks in celebration.

The statement was read by an official from the United Nations, which mediated the talks along with the Catholic Church.

‘The measures applied in all our territories are lifted,’ confirmed Vargas, referring to roads and oil facilities in the Amazon blocked by protesters for almost two weeks. Those actions suspended the distribution of almost 70 per cent of the country’s crude oil.

Indigenous groups make up a quarter of Ecuador’s 17.3 million people. Thousands who had travelled from disadvantaged communities across the Amazon and the Andes to spearhead the protests in Quito, started to head home after the deal was announced. 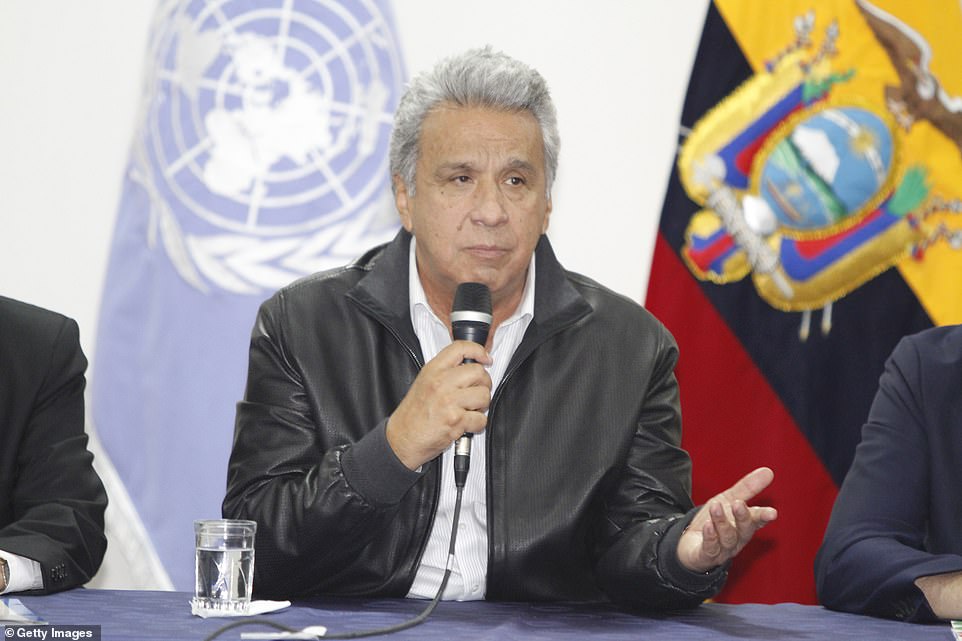 President of Ecuador, Lenin Moreno announced the revocation of Decree 883 after a first meeting of CONAIE and the Ecuadorian Government to resolve the crisis yesterday in Quito, Ecuador 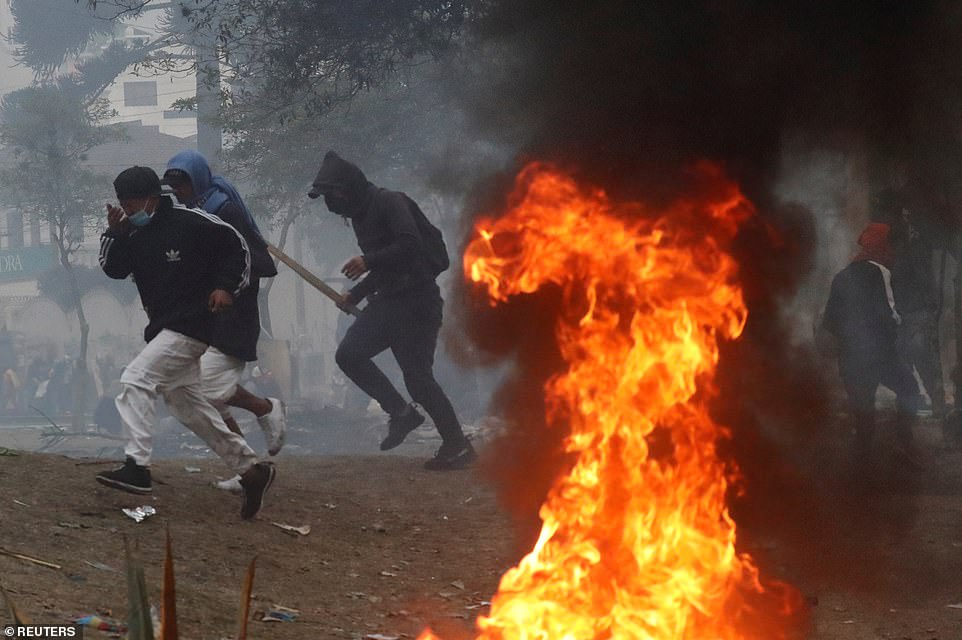 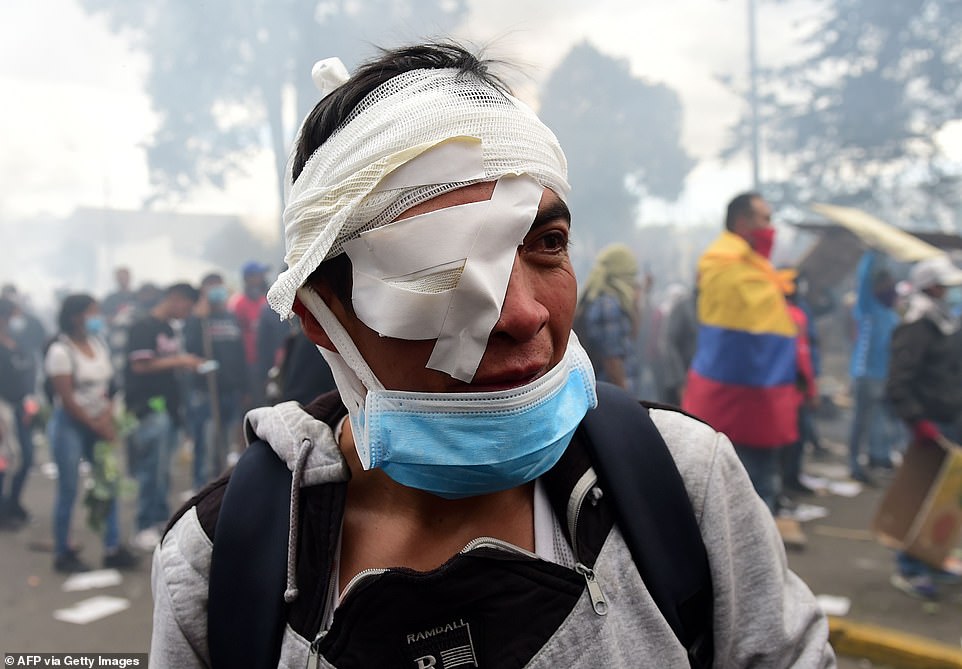 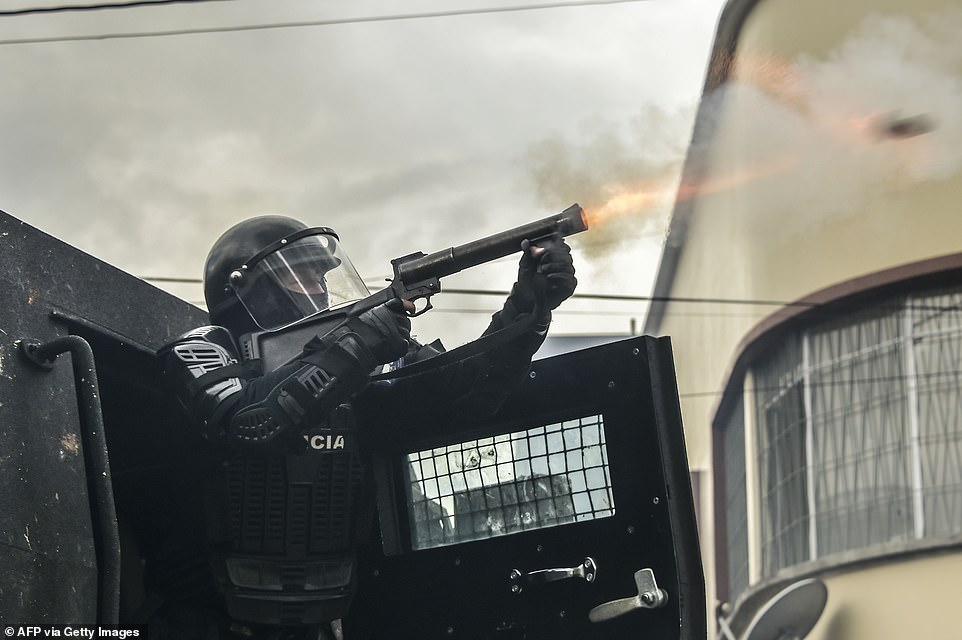 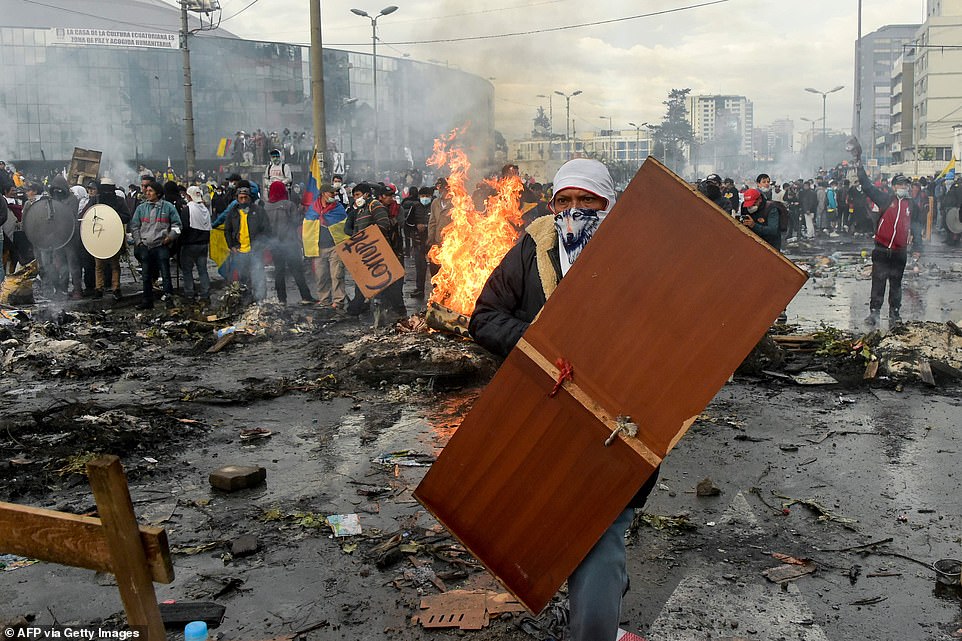 ‘Indigenous brothers, I have always treated you with respect and affection,’ Moreno said as the talks opened. ‘It was never my intention to affect the poorest sectors.’

Moreno had previously declared a curfew and placed Quito under military control to quell the unrest.

On Sunday, violent clashes continued before the talks began as police fought to disperse protesters who tried to put up a barricade of debris from Saturday’s unrest.

Authorities said 1,349 people had been injured and 1,152 detained in the demonstrations.

The violence forced Moreno to relocate his government to Ecuador’s second city, Guayaquil, and hit the oil industry hard with the energy ministry suspending more than two-thirds of its distribution of crude.

CONAIE had previously rejected an offer of dialogue but reversed course Saturday.

UN Secretary General Antonio Guterres earlier called on all groups ‘to commit to inclusive and meaningful talks, and to work in good faith towards a peaceful solution.’ 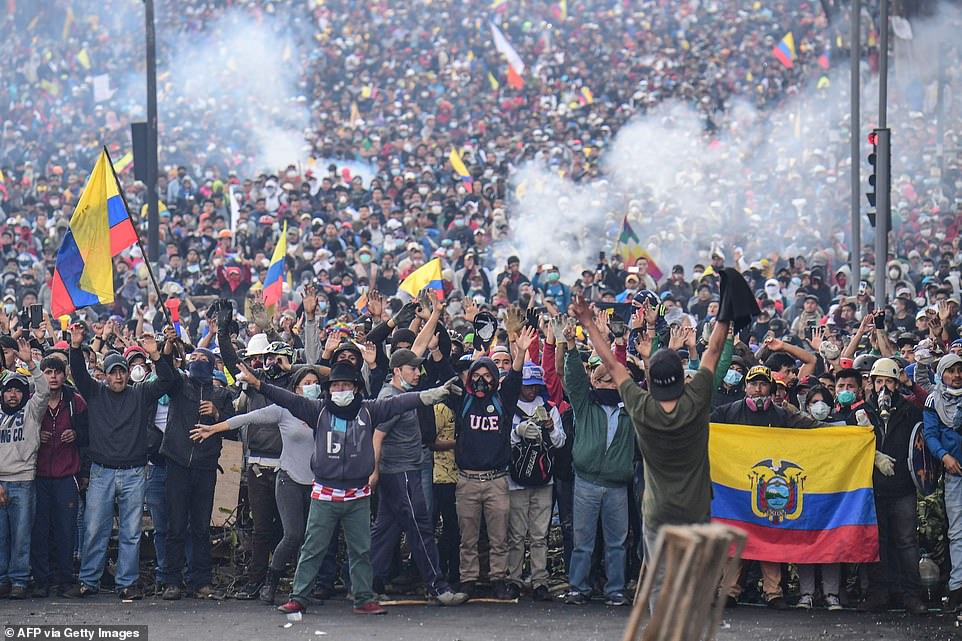 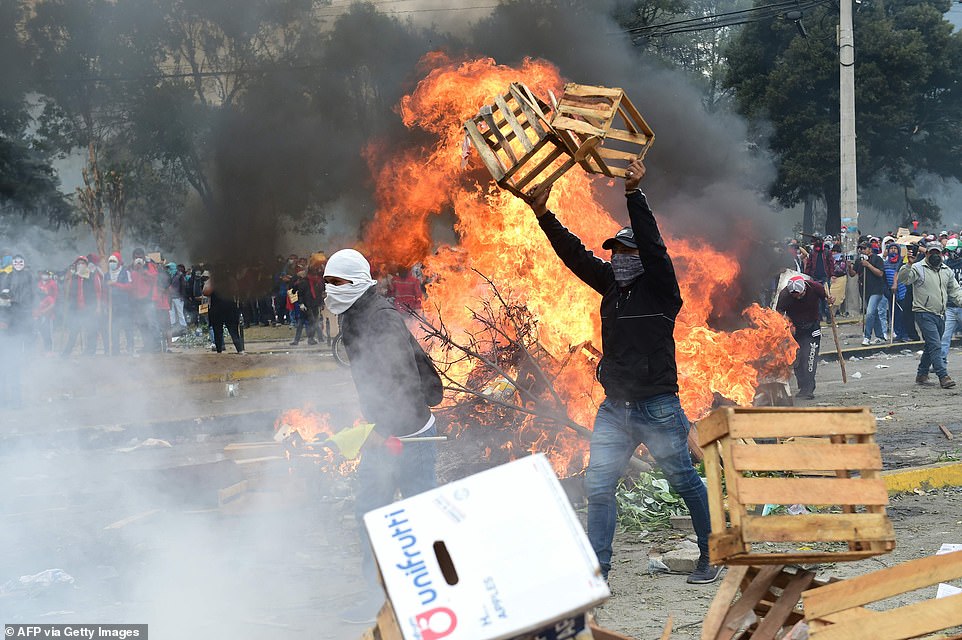 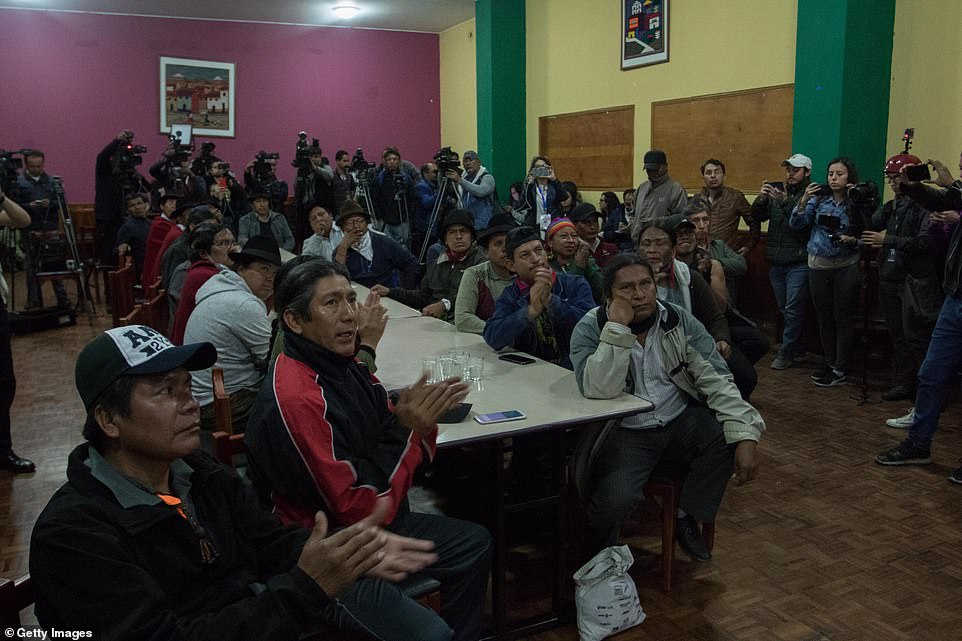 Indigenous leader take part in a popular assembly in a bid to reach a deal with the President of Ecuador, Lenin Moreno 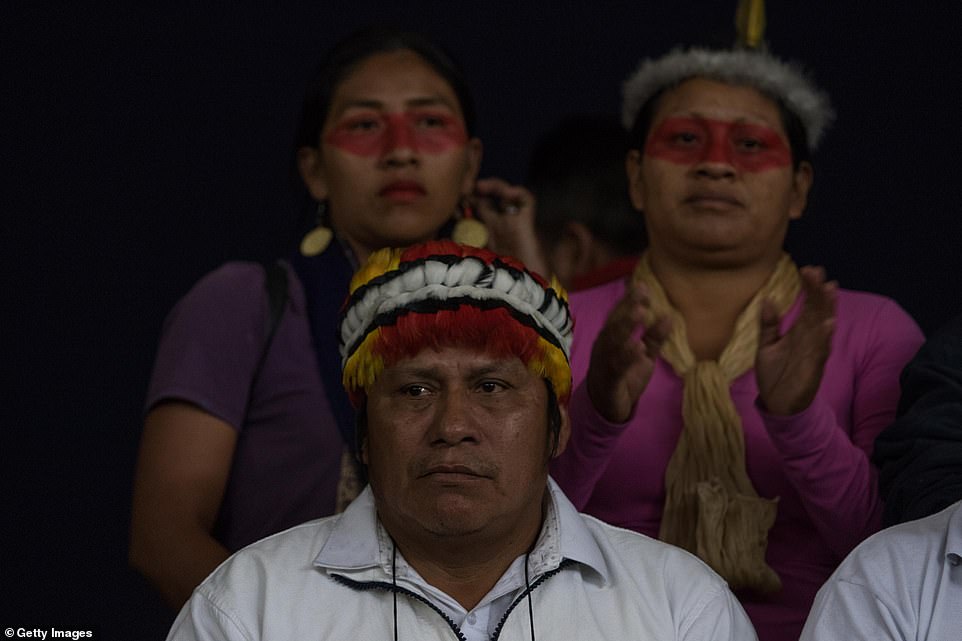 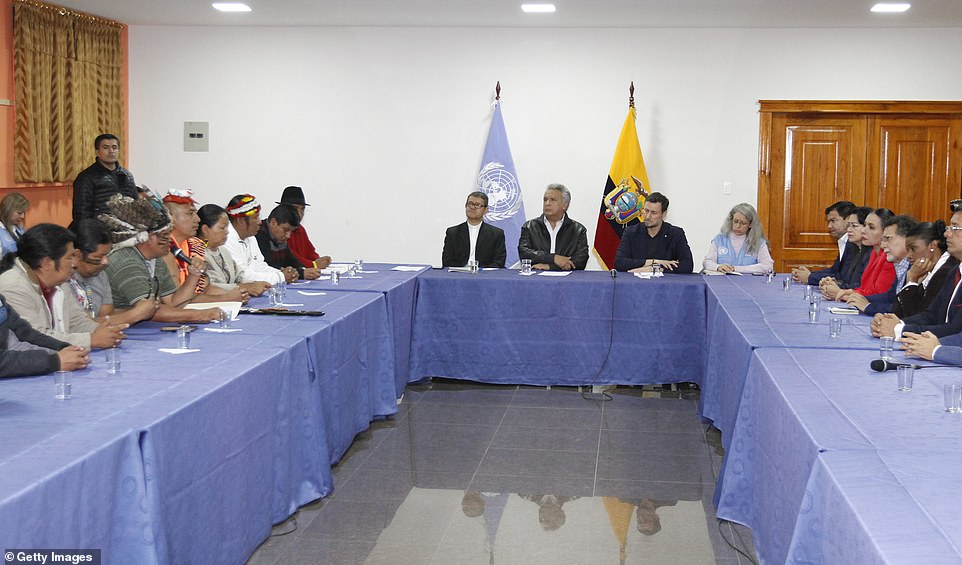 President of Ecuador, Lenin Moreno (centre) and Arnaud Peral (right) Resident Coordinator of the United Nations System and UNDP Representative in Ecuador announce the revocation of Decree 883 after a first meeting of CONAIE and the Ecuadorian Government to resolve the crisis yesterday

Demonstrators on Saturday ransacked and set fire to the building housing the comptroller general’s office, which was shrouded in thick smoke after being attacked with fire bombs.

Protesters on Saturday also targeted a television station and a newspaper.

The Teleamazonas TV channel interrupted its regular broadcast to air images of broken windows, a burned vehicle and heavy police presence on the scene.

The station evacuated 25 employees, none of them hurt. Nearby, protesters built barricades in front of the National Assembly building as police fired tear gas at them.

‘We have nothing to do with the events at the comptroller’s office and Teleamazonas,’ said CONAIE.

El Comercio newspaper reported on Twitter that its offices were attacked by a ‘group of unknowns.’ 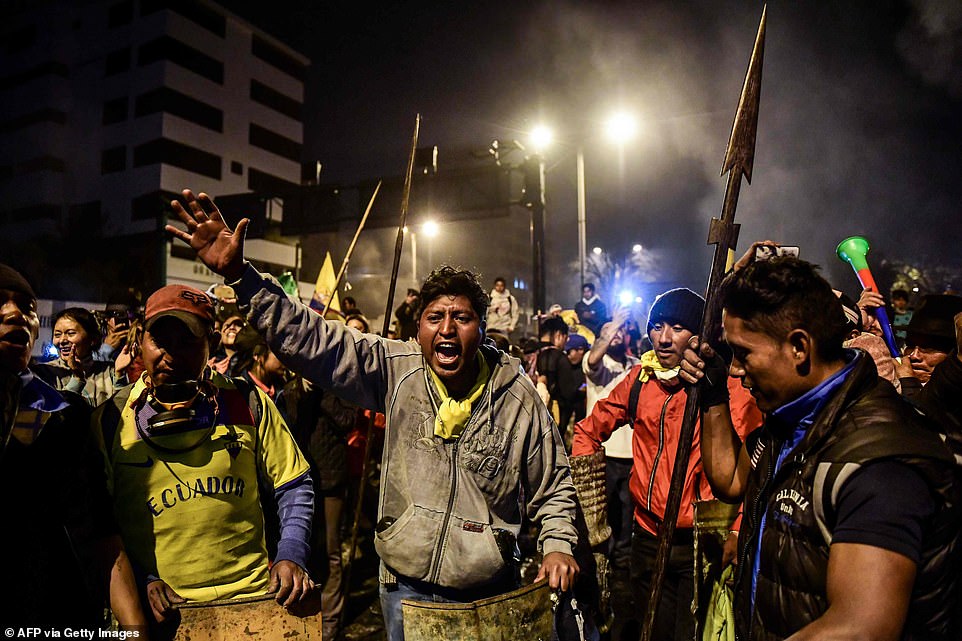 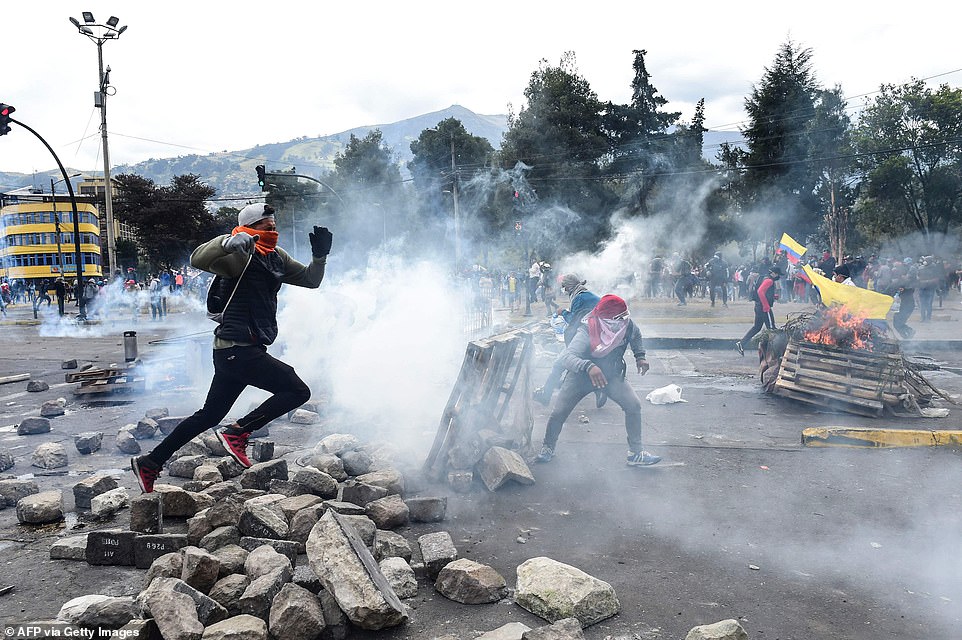 Demonstrators clashed with the police at a barricade during the protests on Friday and Saturday. Indigenous groups had spearheaded demands that President Lenin Moreno reinstate fuel subsidies

Protesters did not immediately heed the curfew that went into effect on Saturday, with security forces struggling to impose order in some parts of the city.

‘Where are the mothers and fathers of the police? Why do they let them kill us?’ cried Nancy Quinyupani, an indigenous woman.

The restrictions in Quito, a city of 2.7 million, came on top of a state of emergency Moreno had declared on October 3, deploying some 75,000 military and police and imposing a nighttime curfew in the vicinity of government buildings.

Moreno is struggling with an economic crisis that he blames on waste and corruption by Correa’s administration.