Ecuador's indigenous march over 600km to demand an end to mining 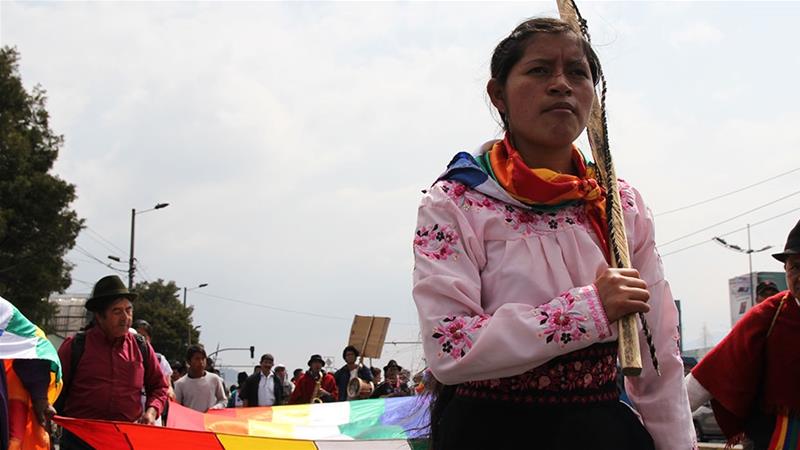 Quito, Ecuador – More than 1,500 indigenous protesters had a clear message as they march through Ecuador’s capital Quito on Wednesday: Stop mining on, or near, indigenous territory.

“We need to fight together,” said Alexandra, a Kichwa indigenous woman who walked more than 600km in traditional sandals from the southern Amazonian province of Zamora Chinchipe to Quito. She was one of about 80 indigenous protesters who set out from their native lands on November 3 with the goal of ensuring the protection of their water and territory. Hundreds more from other indigenous groups joined them along the way.

“It’s just not possible that the government and transnational companies want to keep destroying our forest, our lakes, our paramos,” Alexandra told Al Jazeera.

The protesters demanded a meeting with President Lenin Moreno, which he agreed to hold on Thursday, without setting a time.

Yaku Sacha Perez Guartambel, president of the Confederation of Peoples of the Kichwa Nationality and one of the leaders of the march, was pleased but remained sceptical, saying previous talks with the government “have not advanced anything”.

‘We’ve had to leave our homes’

Zamora Chinchipe has been one of the provinces most affected by the country’s mining industry. It is located in the Condor Mountain Range (Cordillera del Condor), home to several indigenous communities, an area particularly rich in biodiversity, surrounded by dense cloud forest.

But the region is also rich in minerals, where small-scale gold miners and Ecuador’s largest open pit mines operate. This includes the Chinese-owned Mirador copper mine, the region’s first open pit mine.

“They’re still in the construction phase and the environmental impacts are very severe,” Carlos Mazabanda, Amazon Watch’s Ecuador Field Coordinator, told Al Jazeera. More than 1,200 hectares of primary forest were clear cut for the mine, which has affected rivers, aquatic life and indigenous communities’ access to water, he added.

“That’s why [the march] left from this region, demanding that more projects like this not be developed,” Mazabanda said. 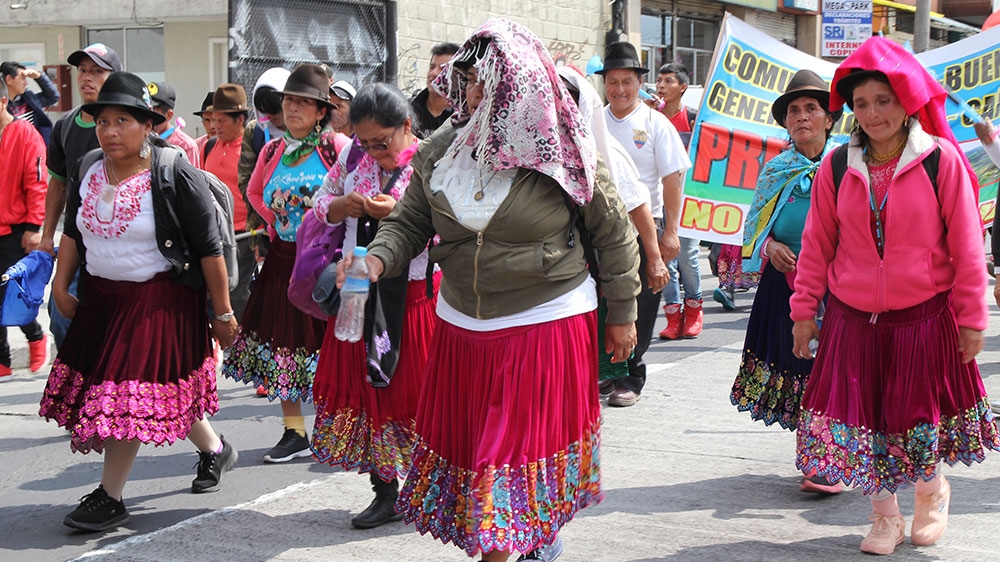 Tension between indigenous communities and the mining industry in the Cordillera del Condor reached a peak in 2016, when the Ecuadorian army evicted the Shuar community from the town of Nankits to make way for the San Carlos Panantza open pit copper mine. The community tried several times to retake the territory, which ended in an aggressive standoff with authorities and the death of one police officer. The former government of Rafael Correa responded by calling the indigenous resistors “terrorists” and putting them on a blacklist, but they have since been removed. The Chinese-owned mine is currently under development.

“It’s been really hard at times … more than anything because the government doesn’t listen to us, and some of us don’t have a place to live. We’ve have to leave our homes because of mining projects,” Alexandra said.

Last year, indigenous communities marched for nearly two weeks from the Amazonian city of Puyo to Quito to demand an end to oil extraction in the rainforest.

President Moreno, who met protesters, agreed to stop all new oil and mining concessions that failed to receive the prior and informed consent of local communities. The move was praised by environmentalists and considered a small win for indigenous rights.

But months later, the government continued with plans to auction off plots of land in the Amazon for oil exploration, despite objections by local communities. The government is expected to release a list of qualifying companies in December and sign contracts in March of 2019. 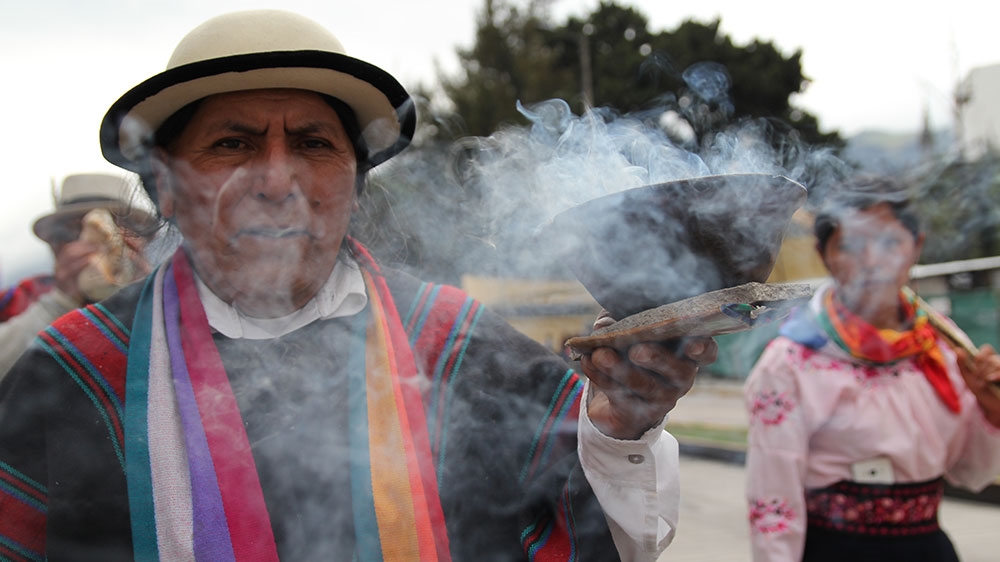 The government also continues to promote foreign investment in its mining sector, aiming to double its mining GDP by 2021.

Both initiatives, according to the government, are meant to boost Ecuador’s economy, which is still struggling since the drop of international oil prices in 2014 that also caused major divestment in its oil industry.

Juan Pizar, a Kichwa protester from the southern province of Canar, said land near his community of Tambo has been concessioned, but the group was not consulted. “We don’t want it,” he told Al Jazeera. 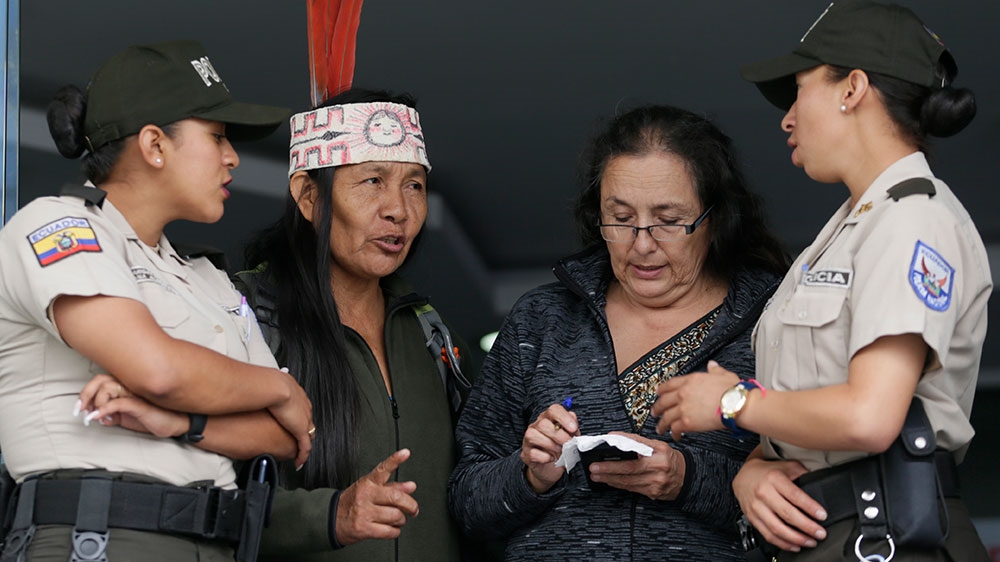 Mazabanda says indigenous communities have been planning many more initiatives to put increasing pressure on the government to comply with its promises.

On Tuesday, a small group of Amazonian indigenous women occupied the Ministry of Hydrocarbons, refusing to leave until they speak with Minister Carlos Perez and present him with a list of demands – namely that oil drilling in the Amazon stop. As of Wednesday night, the women were still in the ministry.

“Oil will remain under the ground because we want to protect human life. Let’s all go out to defend life,” wrote Gloria Ushigua, one of the occupiers from the Zapara nation, on her facebook page while inside the ministry.